In the last few weeks, we have seen a phase of strong downward pressure on various emerging currencies. Since the end of April, which is when the dollar strenghtand US interest rates rises began to materialize, the Argentine peso has depreciated nearly 20% against the US dollar, the Turkish lira more than 10%, and a large number of currencies (including the Polish zloty, the Brazilian real, the Mexican peso, the Chilean peso and the Colombian peso) have depreciated by between –6% and –4%. All this has alerted investors and has raised the important question of whether we are on the brink of a widespread crisis in the emerging economies, or have various unrelated problems simply affected specific countries at the same time?

To answer this question, let us look first at what lessons can be learned from the cases of Argentina and Turkey, the two countries most affected by the financial stress. The key question is, why are investors betting against their currencies? Besides short-term speculative aspects, the main factor seems to be the erosion of the credibility of both governments with regards to their economic policy strategy. In the case of Argentina, this strategy is being implemented gradually (as opposed to a more intense implementation confined to a shorter period). Although in 2016 and 2017 this strategy appeared to have the approval of the markets, in recent months two problems have become apparent. Firstly, the strategy is not producing all of the expected results. Despite the measures adopted, significant macroeconomic imbalances remain, particularly high inflation (26.5% year-on-year in April), the persistent current account deficit (4.6% of GDP at the end of 2017) and a government deficit of around 6.5% of GDP for 2017 as a whole.

A second weakness of the strategy is the fact that some inconsistencies have been noted. For instance, whilst announcing ambitious objectives, it is not clear that measures consistent with those objectives are being taken. The most obvious case of this weakness has been in preventing inflation. In fact, the Argentine peso began to weaken last December, when an inflation target of 15% was announced for 2018. This was received with doubts among investors, which were only reinforced in January when the Central Bank opted to reduce the reference rate. After costly interventions in the foreign exchange markets, having a reference rate of 40% and forcing the commercial banks to reduce their foreign currency holdings, the end result of this lack of proactivity has been to request financial aid from the IMF.

A review of Turkey’s episode yields similar conclusions. In this case, investors’ concerns have grown as it has become clear that the government’s economic policy was not acting to counteract the country’s sizeable macroeconomic imbalances. With the country growing at over 7% in Q4 2017 (the latest available figure), inflation at 10.8% in April and the current account deficit at 5.6% of GDP in 2017, it was not until the end of May that the government began to take clear measures to tackle the situation. The reference rate was increased by 300 bps to 16.5%, the system for implementing monetary policy was simplified and certain macroprudential aspects were tightened. In the minds of investors, this was surely too little, too late.

Therefore, both countries share the unfortunate combination of macroeconomic imbalances and inadequate economic policies. Are the rest of the emerging economies in a similar situation, particularly those that have suffered the most from the recent depreciations? Addressing these crucial questions requires us to look at the situation of the main emerging economies in terms of external and internal vulnerabilities, and the economic policy’s margin for manoeuvre in the event of potential shocks. Of course, the worst combination will be countries with significant imbalances and little margin to absorb such shocks.

With regard to the first area, by assessing the major emerging economies and comparing the current situation to that of 2007, when the emerging countries were at the end of the previous cycle of growth, we can draw two major conclusions. The first conclusion is that the main imbalance is the result of the accumulation of debt. This is reflected both in the increase in external debt (it is currently 8 pps higher than it was in 2007) and in internal credit (measured by the distance between the credit/GDP ratio and its long-term trend). Among the emerging countries with this issue, some show particularly high levels of debt. These include Turkey, Argentina, South Africa, Indonesia, Colombia, Malaysia, Hungary, Poland and Chile (see the table below to identify the countries with the worst situation in each imbalance).

With regard to the margin for manoeuvre in the event of potential shocks that might trigger the vulnerabilities, it is important to know whether each country has sufficient foreign currencies to intervene to protect its currency, whether there is margin for error in its fiscal position, and whether there is scope to increase the influence of monetary policy without reference rates reaching unacceptable levels. As was the case with the vulnerabilities, the ability to mitigate potential shocks is less than the level desirable in Argentina, Turkey, South Africa, Malaysia, Brazil and Hungary. The decision-making process could also be hampered by the fact that elections are due to be held in the first four countries in 2018 or 2019.

In short, the list of fragile emerging economies, based on the review above and similar exercises performed by other institutions, is rather long and would include Argentina, Turkey, South Africa, Colombia, Malaysia, Hungary, Brazil and Indonesia.

In this context, what is their sensitivity to potential shocks, such as a sharp tightening of global financial conditions?

To assess the impact of such shocks, we analysed the impulse response functions of a VAR for the fragile emerging economies, and another for the rest of the major emerging economies, when faced with a tightening of the global financial conditions index of 1.5 points.1 Based on historical experience (2007-2017), a tightening of financial conditions of this nature, if sudden, would cause growth in the fragile emerging economies to drop by 1.7 pps after two quarters, while in the rest of the emerging economies the drop would be in the order of 0.9 pps. This is by no means a minor impact. Furthermore, it should be taken as a minimum threshold, since investors’ complacency when faced with such imbalances, and their willingness to accept inappropriate economic policies, will likely be lower than in the past.

However, all this does not mean that judgement has already been passed. For starters, the market appears to be uneven among the emerging markets. Even when the financial pressure on Argentina or Turkey was at its maximum, the issue was relatively contained. A second point to bear in mind is that many of the aforementioned fragile emerging economies are relatively small in size or have a marginal position in global trade and financial flows, hence their role can hardly be considered systemic. In short, as we state in the title of this Focus, Argentina and Turkey should not be taken as indicators of the fate of many emerging economies, although strictly speaking, they are certainly not exceptional cases either.

1. A tightening of this intensity appears reasonable if we analyse the historical trends in financial conditions during periods of rising interest rates in the US and the scenario envisaged for the coming years. 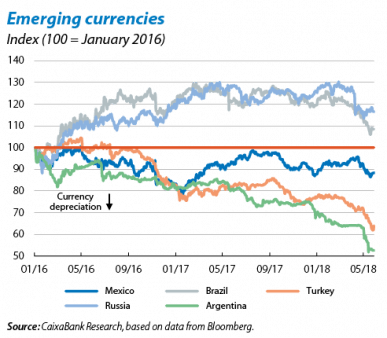 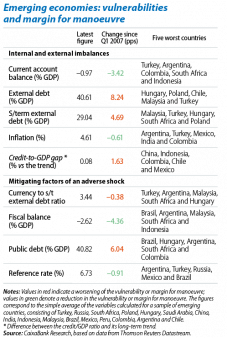 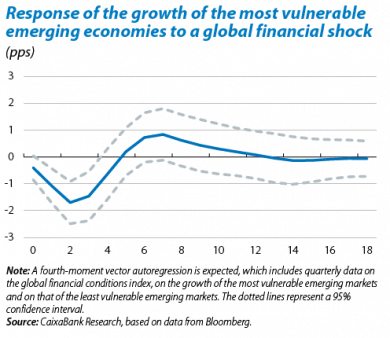