A generally constructive tone for the main international financial markets

International markets have become constructive after a relatively peaceful summer, particularly the developed bloc. Whereas the summer was relatively stable and even saw a downward trend in the case of European markets, equity firmed up in September and long-term interest rates picked up slightly. Continuing strong economic activity was one of the main factors supporting these positive trends, especially in Europe and the emerging economies. Nevertheless, repeated upswings in risk aversion are a constant reminder that the global financial environment is still sensitive to several sources of uncertainty.

Political risk returns centre stage. Volatility has remained at an all-time low in general. However, the main financial assets were relatively sensitive to upswings in tension. These are due to the (at present mainly verbal) escalation of the conflict between the US and North Korea, especially in emerging assets. So far this risk seems temporary and limited. The boom in US equity is another source of risk, while there are still doubts regarding the health of the US economy, albeit slightly mollified by the solid economic activity data posted recently. On the other hand, there seems to be less risk regarding OPEC’s ability to maintain equilibrium in the oil market, at least in the medium term. This is due to the strong commitment of the vast majority of the organisation’s members (see the last paragraph of this article for more details).

The ECB is confident about the euro area’s economic activity and starts to look at different options to withdraw its asset purchase programme (QE). As expected, at its September meeting the ECB did not alter the parameters of its monetary policy nor did it modify its future stance. The ECB’s Governing Council (GC) noted the improved macroeconomic scenario but also mentioned that the euro’s appreciation constitutes a source of uncertainty and risk for its growth and inflation forecasts. As announced at its previous meeting, the GC also stated that it had started to evaluate the possible changes it could introduce to QE. As noted by Draghi, such decisions are expected to be taken at the next meeting, set for the end of October. As usual, Draghi stressed that the ECB’s strategy will be based on patience, persistence and prudence.

The Fed announces it will begin reducing its balance sheet in October. As expected, the Federal Open Market Committee (FOMC) officially announced its intention to shrink its balance sheet as from October. According to details announced at its June meeting, it will stop reinvesting USD 6 billion of public debt and USD 4 billion of debt and mortgage-backed securities per month, with the rate speeding up over the coming quarters. This announcement, widely expected by the vast majority of analysts and investors, did not cause any big stir in international financial markets. Finally, the Fed kept the fed funds target unchanged at this meeting but left the door open to another interest rate hike in December. This plan is in keeping with the Fed’s positive assessment of the macroeconomic trend and its scenario of gradual monetary policy normalisation.

Long-term sovereign bond yields pick up in the developed bloc while risk premia move in Europe. In spite of further declines at the beginning of the month, yields on the developed bloc’s main sovereign bonds made gains by the end of September. This trend appeared to stop with increased nervousness due to geopolitical tensions. But the fiscal reform announced in the US and greater expectations of a fed funds interest rate hike in December helped to push up long-term yields towards the very end of the month. The yield on 10-year Treasury bonds went above 2.3% (from 2.1% at the end of August) while the bund came close to 0.5% in Europe. The countries on the Iberian Peninsula saw the biggest changes in their risk premia. Spain’s risk premium returned to levels more in line with the beginning of the summer, returning to around 120 points. Portugal’s risk premium fell considerably from 240-250 bp, stabilising in the region of 200 points after the country’s sovereign rating was upgraded by Standard & Poor’s.

The main stock markets remain constructive but are still sensitive to geopolitical risks, particularly the emerging bloc. Equity performed well early on in the month. European and US stock markets made steady gains, in the US case reaching a new all-time high, although this situation is increasingly a cause for concern. At the end of the month, the details announced of Donald Trump’s long-awaited tax reform pushed equity back up in the developed bloc and especially the US. This reform includes lowering corporate tax from 35% to 20%. Emerging stock markets benefitted from the improved macroeconomic situation with sustained gains throughout most of the month. But recurring tensions with North Korea led to notable corrections. On this occasion, these losses were exacerbated by greater expectations of a US tax hike. Nevertheless, this increased nervousness in emerging markets should be short-lived.

In the forex market, the US dollar offsets part of its devaluation which began at the start of the year. After strongly depreciating since early 2017, the last part of the summer brought relative stability for the dollar. The US currency then picked up strongly over the last few days of September and corrected part of its depreciation. Greater expectations of another fed funds interest rate hike in December, together with announcements of Donald Trump’s new fiscal plan, are the main factors supporting the dollar against most other currencies. The euro fell below USD 1.18 after briefly topping USD 1.20. At an international level, the strong dollar also affected the main emerging currencies which depreciated in the last week of the month against the US currency.

A considerable rise in oil prices. The price of a Brent barrel increased by almost 10% in September, coming close to USD 60, its highest price since mid-2015. Part of this increase is due to supply factors. The strong commitment of the vast majority of OPEC members has helped to push up crude oil prices. But also, after a referendum in Kurdistan, threats made by Turkey to block the region’s exports also contributed to this rise, although this effect should be temporary. The recent spike in demand also helped to balance the oil market, thereby supporting price rises. Crude prices rose sharply in spite of the recovery in US inventories. This upswing is due mainly to the impact of meteorological events at the end of summer, whose consequences should be short-lived and limited. Whether this recovery continues will depend on OPEC members continuing to respect the agreement reached a few months ago. This agreement may also be extended to March 2018, a likely event if supply looks strong. In any case, uncertainty is still high in the oil market, particularly because of doubts regarding the trend in supply. 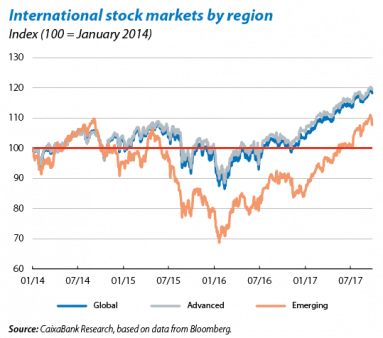 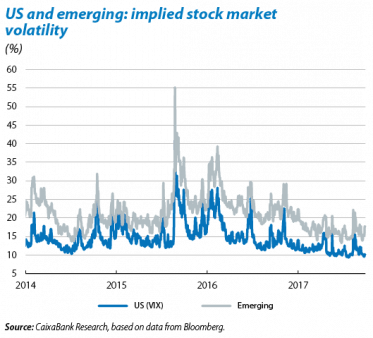 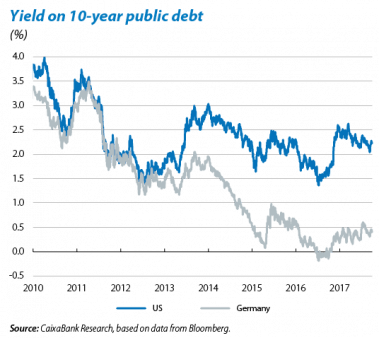 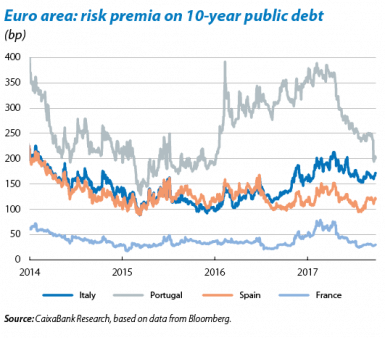