The global growth outlook for 2018 is positive. Both emerging and advanced economies are expected to grow faster than in previous years and this expansion is likely to continue over the next few years. But this trend is not free from risk, particularly in the area of macrofinance. This article examines the major macrofinancial risks on the horizon and analyses their causes and possible consequences. Only then will it be possible to assess how far this good outlook for 2018, and for the years ahead, might be jeopardised by macrofinancial factors.

In more detail, two macrofinancial imbalances have developed in recent years which, because of their potential scope and contagion, pose a risk to economic prospects in general. The first is the sharp increase in global debt which, according to BIS, has grown by 40% since 2008. This increase is largely a consequence of the large rise in debt in emerging economies, which has grown by more than 50 pp since the financial crisis and has risen from 276% of GDP in 2007 to around 325% in 2017. While there are concerns regarding the sustainability of emerging debt, the advanced economies are also in the spotlight due to the strong appreciation of some financial assets, especially US equity. The S&P 500 index began to recover after the financial crisis in the first quarter of 2009. Since then it has increased by more than 200%, the equivalent of an average annual increase of more than 14%. Fundamental valuation ratios such as the CAPE have also reached levels not seen since the dotcom bubble of the 2000’s, suggesting the US stock market might be overvalued.1 This combination has fuelled concerns among analysts and investors.

Although several factors have contributed to the development of these two macrofinancial risks, the highly accommodative monetary policy stance taken up in the period after the 2007 financial crisis appears to be one of the main reasons behind the imbalances. In fact, when a central bank takes measures to reduce interest rates, one of the aims is precisely to encourage a search for yield and investment in riskier assets. Logically, during a recession or economically weak period, this mechanism helps to boost the economy.

The effectiveness of the unconventional monetary policy measures implemented by the main central banks is indisputable. We only have to look at the close relationship between the trend in US equity, emerging debt and the US Federal Reserve’s swollen balance sheet.

Assuming monetary policy has played an important part in the development of such imbalances, the question that immediately comes to mind is how they will be affected by the interest rate normalisation which the main central banks are expected to carry out over the next few years.

Recent experience suggests that, provided interest rates are raised gradually, the impact should be contained. It is true that when the Fed announced its intention to begin monetary normalisation in 2013, there was a one-off episode of increased risk aversion and capital outflows from many emerging economies of a certain size. However, since then the effects on emerging flows have been limited, particularly after normalisation started in earnest, which has been gradual and with highly measured forward guidance. As US monetary normalisation is expected to remain very gradual, its impact on risk asset trends should be relatively contained.

We can therefore conclude that one of the key aspects of this discussion is whether the Federal Reserve might be forced to become more aggressive in its monetary policy. One typical reason would be inflation; more specifically, higher inflation than expected. Answering this question is tantamount to understanding why inflation has only recovered slightly in recent years given the growth in economic activity.

The strongest reason given for the sluggish rise in inflation is mainly based on the flattening of the Phillips curve, indicating that inflation is now less sensitive to changes in the output gap. The curve has particularly flattened out since the financial crisis (see the second chart).2 Given this change in the inflationary pattern, the Fed has become cautious and expects inflation to rise gradually. Investors, however, expect inflation to remain very low and this is reflected in financial asset prices. For instance, the trend in inflation expectations implied by some financial market instruments fell sharply at the end of 2014 and has barely recovered since.

However, there is reason to believe that the Phillips curve is largely flatter due to cyclical factors whose influence may soon disappear. As shown by Daly et al.,3 the weakness in wage growth and, as a result, inflation in the US over the past few years may be due to a change in the composition in the labour market. During the economic recovery, workers earning below-average wages have joined the labour market, ultimately slowing down wage growth. However, as the expansion intensifies, this factor will have less impact and wage growth will accelerate. In fact, various labour market indicators suggest the labour market is very close to levels typical of a mature economic cycle. This suggests that unexpected increases in inflation are now more likely than in previous years.

And here we come full circle and must again examine the possible repercussions of the aforementioned macrofinancial imbalances should inflation rise unexpectedly and quite sharply. At the outset, an increase in inflation expectations would push up long-term interest rates, which could lead to corrections in high US equity valuations.1 Higher inflation expectations and a more demanding financial environment could also damage emerging debt. In this case it is revealing to look at the sensitivity of financial conditions in emerging economies to those of the US. As can be seen in the third chart, emerging capital flows have responded little to changes in US interest rate expectations in 2017. The situation was different in 2016, however, when higher interest rate expectations resulted in a fall in portfolio capital flows to emerging markets.

Which year will 2018 resemble? The stable 2017 or more agitated 2016? The answer largely depends on the dexterity of the Federal Reserve in a year when it will have to handle more demanding situations than in the recent past. 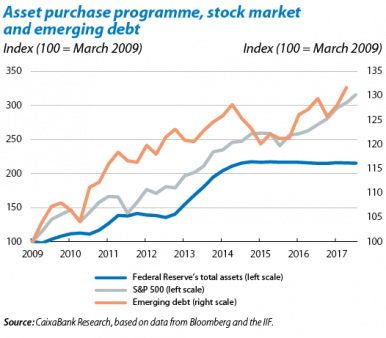 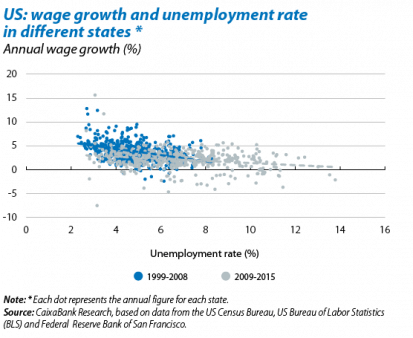 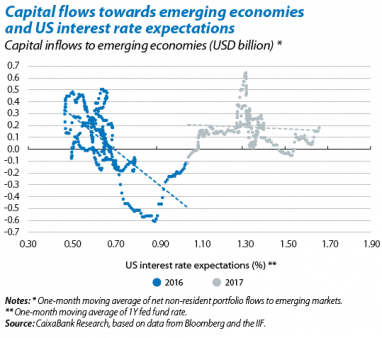