Growth in the emerging economies and global financial conditions: a close relationship

The emerging economies are enjoying an invigorating economic momentum: since the Great Recession of 2009 and up until 2017, they grew at slightly more than 5% per year and are expected to continue to grow at this rate for the next five years, according to analysts’ forecasts. As we have emphasised in other articles,1 there should be no doubt that part of the economic boost stems from the unprecedented loosening of global financial conditions which began following the Great Recession. However, now that the monetary policy of developed countries is shifting towards a slow but relentless path to normalisation, the key question is to what extent the future tightening of global financial conditions will erode their economic growth.

Historically, the relationship between growth in the emerging economies and indices for global financial conditions has been very close.2 Clearly, a correlation does not imply causation, but if we use more sophisticated econometric techniques, the correlation between the two set of variables remains very high. Specifically, we have analysed the ability to explain GDP growth in emerging countries of three benchmark indicators: financial conditions,3 geopolitical factors4 and financial volatility (VIX). These global factors account for a large part of the variance in growth, specifically 70% during the period between 2007 and 2012, the years most heavily affected by the Great Recession and by the introduction of non-conventional monetary policy, and 55% during the period between 2013 and 2017. Of the total variance explained, financial conditions are the most significant factor during both periods. What is more, this factor becomes increasingly important as we move away from the financial crisis (see first chart).

Of course, we expect that the tightening of financial conditions will occur much more gradually, which should allow the emerging economies to continue to maintain a high rate of growth. However, if the Fed has to accelerate the pace of interest rate hikes, for instance due to wage and/or inflationary pressures increasing more than expected, the impact on emerging countries could be remarkable.

4. We have used the Iacoviello and Caldara risk index, the CaixaBank Research conflicts index and the global political uncertainty index by Baker, Bloom and Davis.

5. An additional benchmark is that in April 2013, during the episode known as «taper tantrum», this index rose by 1 pp in just two months. 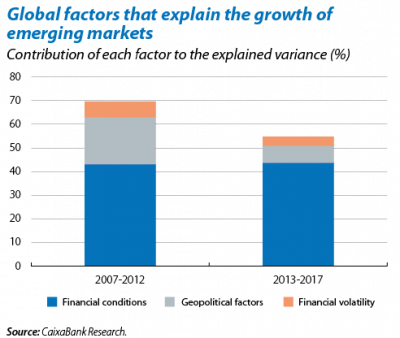 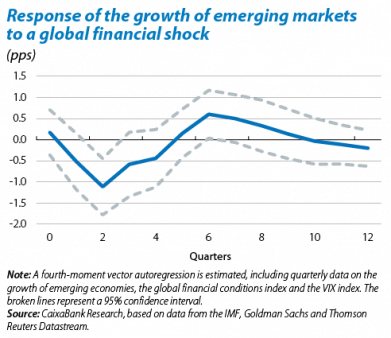