In December the Federal Reserve (Fed) announced it would start what should be an upward path for the fed funds rate. This normalisation of interest rates, which had not risen in almost a decade, is accompanied by considerable uncertainty regarding the possible repercussions for global and in particular US financial markets. An upward cycle tends to lead to a certain amount of caution among investors and this time we should not be surprised if precaution is even greater, as we are starting from an extraordinarily low interest rate.

The hike in the official rate essentially impacts US financial markets via two effects. Firstly, higher interest rates tend to be passed on to fixed asset prices such as sovereign and corporate bonds, particularly with shorter-term maturities, thereby shifting up and flattening out the interest rate curve. This higher yield on bonds means that the discount rates used to value equity are higher, pushing their prices down. Secondly, higher interest rates also push up the financial costs of firms and could cool down demand (sales), two factors which limit the corporate earnings expected and therefore share prices. Asset prices already partly reflect expectations of an interest rate hike so there may not be any huge fluctuations in financial markets. But it is also true that, based on interest rate hikes and the accompanying communication, future expectations may be considerably revised leading to sharper variations.

The experience of the last interest rate upward cycles in the US suggests that investors initially tend to penalise equity. Specifically, the S&P 500 posted, on average, slight losses during the three months after interest rate hikes began. But subsequently, as a positive macroeconomic environment was confirmed, the US stock market tended to regain its upward trend (see the graph). On average bond yields have been pushed up, especially short-term bonds and less risky assets such as public debt, so corporate spreads tend to narrow during a interest rate upward cycle as the macroeconomic environment improves.

When attempting to anticipate the possible impacts of the current upward cycle we must also remember that the starting position is very different to that of previous cycles. Firstly the US economy is embarking on the current hike at a more advanced stage in its financial and credit cycle. With relatively high share prices after years of unconventional monetary measures and corporate earnings at record levels, normalising monetary policy could have a more adverse effect on equity than in the past (see the Focus from MR12/2015 «Is the tide turning for the US stock market?»). Relatively high levels of debt in the high yield corporate bond segment could also widen the spreads for these assets. The divergence of the Fed's monetary policy from that of other large central banks is the other big challenge in the current cycle. By pushing up the dollar's value, which could harm competition for a part of the US corporate sector, this phenomenon, which has already been named the «Great Divergence» could, in turn, affect US share prices. One argument in favour of a more optimistic hypothesis for the effect of this upward cycle is the gradual rate expected for hikes (see also the Focus from MR12/2015 «A federal funds rate hike: this time is different»).

In summary, the current upward cycle in interest rates should not necessarily have a great impact on markets. Its effect will largely depend on whether the economic recovery continues to be confirmed in the US, as well as the absence of any adverse collateral effects on emerging countries and no inflationary pressure leading to a drastic change in the expected path of interest rate hikes. Clear, coherent communication by the Fed will also be vital to avoid large fluctuations in investor expectations and consequently sharp movements in the prices of financial assets. 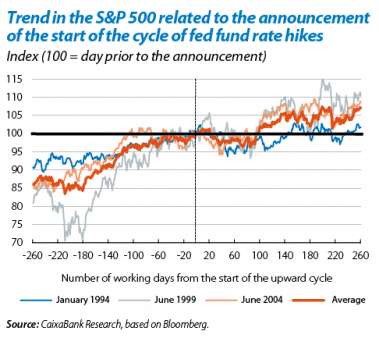