On music, risks and leverage 10 years after Lehman

10 years ago, on 15 September 2008, the bankruptcy of Lehman Brothers plunged the world into the worst financial crisis since the Great Depression of the 1930s. If its origin was in a relatively small market (US subprime mortgages), how can it have had such far-reaching consequences? We know1 that the financial crisis was preceded by a long period of global imbalances, accommodative financial conditions and inadequate financial regulation. These factors were added to an excessive risk-taking and a rise in indebtedness, thus materialising into a financial crisis. Let’s see what role these two factors played and what ramifications we are still experiencing today.

To begin with, we must go back to the Asian crises of the late twentieth century and the stock market crash of 2001, which triggered an increase in risk aversion and a greater desire, at the global level, to own safe assets. This demand, initially unsatisfied by the existing supply, incentivised the financial system of the advanced economies (led by the US) to create safe assets through the so-called process of securitisation. As an example, in the mortgage market this process consisted of bundling up mortgages into a new security, known as a mortgage-backed security (MBS), which gave the owner the right to receive regular payments from the mortgages that made up the MBS. MBSs grouped together a very large number of mortgages, so it was considered highly unlikely that the payments on all of these mortgages would default at the same time. Thus, this cash flow was considered «safe» and could be securitised into an asset that would also be safe. Indeed, the US financial sector produced a large supply of seemingly safe assets with which to satisfy the demand (see first chart). In fact, the attraction was so great that the practice spread rapidly, to the point that financial institutions bought and sold these assets between one another and held them on their balance sheets. However, this generated strong interconnections in the financial system, which was the seed that would later transmit the problems of the subprime mortgage market to the entire international financial system.

Besides these interconnections, the perception of these assets as «safe» had an inherent weakness: it underestimated the likelihood of a widespread increase in defaults on mortgages. Given the environment at the beginning of the 21st century, with low interest rates and dynamic economic activity, it was only human to think that things would remain not so different in the future, that the cost of credit would remain low and that default rates would be minimal. Nevertheless, by casting some dark clouds over this optimistic sentiment, the rise in mortgage defaults caused investors to wonder about how safe those assets really were. Furthermore, when investors became aware that many of the financial institutions held those assets on their balance sheets, and those assets had now become perceived as less valuable, they questioned the institutions’ solvency. Finally, the very opacity and complexity of the product (an MBS could contain thousands and thousands of mortgages) exacerbated this distrust. In this situation, the granting of loans between institutions evaporated, as did, ultimately, liquidity.

Not only that, but the doubts surrounding the institutions’ solvency were accentuated by the other protagonist of this article: leverage. The financial institutions had financed the expansion of their balance sheets (which contained an accumulation of securitised assets) with an increase in leverage, in other words, through debt (as opposed to using equity capital). On the one hand, this was favoured by bad regulation, given that securitisation allowed institutions to reduce their capital requirements. On the other hand, the over-optimism provided a feedback mechanism for this leverage and created a seemingly virtuous circle: the expectations of an increase in the value of the assets raised the value of the collateral, which allowed more risk to be taken and the level of debt to be increased, which in turn increased the value of the assets even more. In fact, even knowing that the optimism was excessive, the market players wanted to keep betting: the optimism of the rest of the economy continued to raise the value of the assets, thus feeding back into the circle. In the words of Charles Prince, then one of the top executives at Citigroup, «As long as the music is playing, you’ve got to get up and dance.» However, when the music did stop playing, the virtuous circle became a vicious one: having high leverage meant having relatively little capital to absorb losses, which raised doubts over institutions’ solvency and restricted their access to financing. This forced them to sell assets and depressed prices, resulting in a loss of value which once again cast doubts over their solvency, again feeding back into the vicious circle.

In this way, the strong interconnections generated by the process of securitisation and the high leverage acted as a conveyor belt, causing the increase in defaults on subprime mortgages in 2007 to filter into much of the international financial system, bringing it to the brink of collapse.

Risks and debt 10 years on

Today we are still experiencing after-effects from that crisis, both in terms of leverage and risk-taking. On the one hand, in the advanced economies the financial sector has significantly deleveraged, but this has been offset by an increase in public sector indebtedness. Furthermore, household debt and that of non-financial companies remains high, and in the emerging economies there has been significant growth in debt, especially among non-financial companies and in China (where the financial system displays strong and opaque interconnections).2

On the other hand, the accommodative monetary policy and low interest rates that have dominated since 2008 (as a result of the severity of the financial crisis and the great recession that followed it) have encouraged risk-taking in search of higher returns. Therefore, although, broadly speaking, the international financial and economic system is now in better health, pockets of localised risk have appeared. With regards to risk-taking, since risk premiums have fallen to historical lows (see the third chart), the accommodative financial conditions have facilitated the issuance of corporate bonds of a lower quality. Moreover, with regards to leverage, the search for returns has led to a large-scale expansion of the global market for so-called leveraged loans (commercial loans granted to institutions with a high risk of default or which already have high levels of debt): in 2017, these loans amounted to 788 billion dollars and exceeded the levels of 2007. What is more, in this market, signs of a mature phase of the global business cycle are beginning to appear: companies with poor credit ratings continue to have abundant access to credit, corporate debt ratings have shown some deterioration and new debt issues incorporate less protection for investors.3 Finally, the strong increase in corporate indebtedness among the emerging economies also reflects their ability to access cheap financing in dollars or euros. However, we are already seeing how sentiment can change course with the withdrawal of the monetary stimulus by the Fed and the ECB.

With all these elements, the world is travelling along a winding road. The major central banks face the challenge of removing that monetary stimulus that was necessary to revive the global economy, precisely in order to prevent the accumulation of vulnerabilities from once again leading to financial upheaval. To paraphrase Warren Buffet, only at the end of the process, when the tide of monetary stimulus has gone out, will we see whether or not the global economy is swimming naked.

1. See the other three articles of this same Dossier for an in-depth analysis of each of these factors. 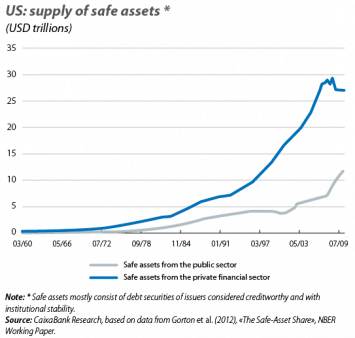 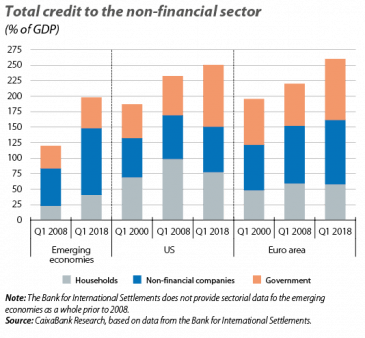 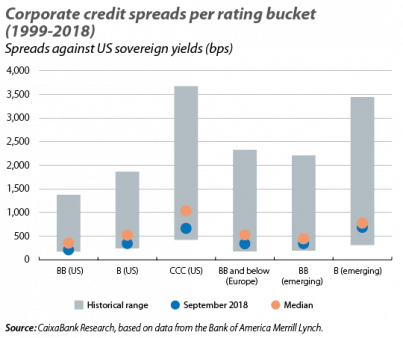