The calm of the markets is upset towards the end of January. The first month of the year has witnessed two quite different phases. For most of the time, the constructive climate that had dominated since the end of last summer continued, boosted by positive cyclical factors from the USA, the euro area in general and Spain in particular. In fact, the absence of upsets in the first effective steps in tapering taken by the Federal Reserve came as a pleasant surprise. However, by the end of the month another turbulent episode had erupted, originating in some countries from the emerging block. The main impact has been seen specifically in the emerging currencies, bonds and shares but developed markets have also been affected, victims of an upswing in global risk aversion. With all the caution required due to the traumatic experience of the last few years, we believe this latest episode will be limited in scope and should not cut short the good prospects for risk assets for the year as a whole.

Argentina, the epicentre of the latest episode of instability. As a result of the central bank of the Argentine Republic cutting back its intervention in the foreign exchange market, the peso suffered a sudden and sharp depreciation that exceeded 20%. In parallel to the serious macroeconomic imbalances suffered by the country, there are also fears of a possible decrease in reserves held by the central bank. In such a situation, the Argentine currency would see depreciatory pressure sharpen considerably, resulting in higher inflation expectations and aggravating capital outflows. Although Argentina has, for some years, been relatively excluded from international financial circuits, the media impact of its problems was a decisive contribution to the deterioration in investor confidence, already vulnerable due to two well-known circumstances: the background of the Fed's tapering and the existence of weak links in emerging countries.

Turkey, Brazil and India return to the firing line. Turkey's notable external imbalance and political instability
led to the lira being more harshly punished. The Turkish central bank's extraordinary meeting, at which it raised the official interest rate by 550 bps to 10%, helped to contain tensions. Doubts also hover over Brazil as its growth and inflation prospects are not very encouraging, taking their toll on the country's currency. This has forced the central bank to once again raise its official interest rate by 50 bps, to 10.50%. Similar factors to those in Brazil have also led India's central bank to raise its official interest rate from 7.75% to 8%. These monetary policy responses could help to contain tensions but what is undoubtedly the best course of action is for countries perceived as weak to further their structural reforms (economic but also socio-political), to some extent following the example of the periphery countries in the euro area over the last few years. Fortunately, there are encouraging signs that such a course of action is being taken, especially in India although not so much in Brazil.

China's financial system is still suspect but the authorities seem to be reliable guardians of stability. The threat of default by a high risk investment vehicle made the markets even more nervous although the speed with which an agreement between the affected parties was reached minimised its impact and scope. Episodes of this nature are likely to be repeated due to the growing size of shadow banking but it is reassuring to see that the authorities have
the situation under control. The Chinese central bank has also increased the size of its operations to inject liquidity in order to contain the upswing in interest rates.

The Fed has once again reduced its monthly debt purchases, from 75 to 65 billion dollars, at Bernanke's last meeting as chairman. The vast majority of analysts and investors were already expecting this new step in tapering, even though it was adopted in the midst of tensions in the emerging economies. The Fed justified this by pointing to the sustained improvement in the labour market and economic activity. The institution repeated its forward guidance on official interest rates, which will remain exceptionally low for a long period of time (even after unemployment has reached 6.5%). After the Fed's announcement, yields on public debt dropped slightly, continuing the downward slide resulting from the growing demand for safe haven assets given the increased risk aversion.

Apart from the case of the emerging countries, the start of tapering is occurring without any great upsets, although the risks associated with this process are still crucial. On the one hand, we cannot rule out sudden upswings in US debt yields should higher growth or inflation rates than expected be observed. On the other, volatility in the public debt markets, currently at a low level, could increase as a result of possible conflicts on the fiscal front (the «debt ceiling»). Nonetheless, the most likely scenario at present is one of slow normalisation in line with the underlying trends in employment and inflation.

The upswing in the euro area's monetary rates has not diminished at the beginning of the year, which could lead the ECB to take corrective measures. The tightening up of Europe's interbank market, caused by banks repaying their LTROs, has not been entirely corrected after the «year-end effect» has disappeared. The Euribor and EONIA rates are most likely to relax by themselves over the coming weeks. If not, the ECB will not hesitate to make use of some of the diverse measures at its disposal to inject liquidity and avoid counterproductive upswings in monetary interest rates.

Periphery public debt provides a positive note with a promising start to the year. The return to the debt markets of Ireland and Portugal to secure long-term financing has represented an important landmark (see the Focus «The PIIGS have returned to the bond market - for good?»). Meanwhile, the performance of Spain and Italy's sovereign debt premia has been highly satisfactory. The 10-year premium for Spain compared with Germany has consolidated under 200 bps. The fall in long-term interest rates allowed the Treasury to launch, with great success, a large syndicated issuance of 10-year debt (See the Focus «The Treasury's Funding Programme in 2014: a demanding agenda»). The improved growth prospects of the Spanish economy are supporting the good performance by yields on its sovereign debt, which has been able to withstand tensions from the emerging economies much better than other risk assets.

The stock markets succumb to the outbreak of tensions in the emerging block. Although international equity had a lively start to the year, the gains accumulated vanished rapidly, giving way to losses for the month as a whole. Three factors lie behind this dip in the stock market. Firstly, fears of another chapter of severe turbulences with the Argentine peso crisis and, the possibility of this spreading to Brazil and the rest of the emerging countries is the main cause. Secondly, the overpurchasing occurring in the stock markets themselves (more evident in the USA, Europe and Spain), which have helped to swell the correction. Lastly, the Fed's announcement that it will continue to reduce monetary stimuli also encouraged stock market losses, most severely in the Asian markets. Although the medium-term prospects for stock markets are upward, expectations of corporate earnings are likely to become increasingly important, especially in a context of progressive normalisation in liquidity conditions. In this respect, one factor that will play an important role in the evolution of the European and Spanish financial sector, and therefore of the stock markets of these countries, is the Asset Quality Review and stress tests to be carried out by the ECB over the next few months.

The euro remains in the higher part of its range of fluctuation for the last few months. Sustained growth in
the US together with the progress made in tapering should support a slow but gradual appreciation of the dollar against the euro.

Hesitant performance by commodities. Brent oil remains stable at 107 dollars/barrel after the drop recorded in the first sessions of the year. The well-established balance between the dynamics of supply and demand (notwithstanding serious geopolitical conflict) suggests that its price will remain within the range of 100-110 dollars per barrel. Among the rest of the commodities, most have been moderately affected by tensions in the emerging countries. The notable and significant exception has been gold, which has picked up to 1,250 dollars per ounce due to its nature as a safe haven at times of instability. 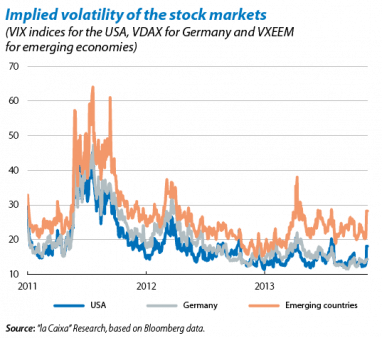 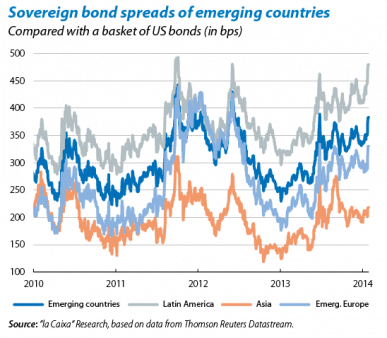 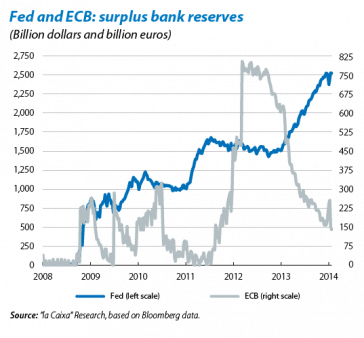 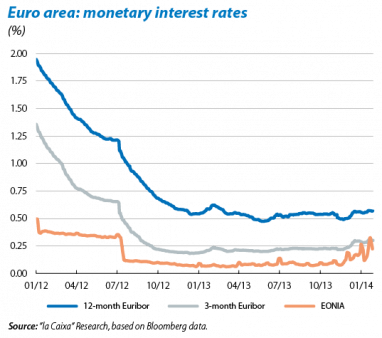 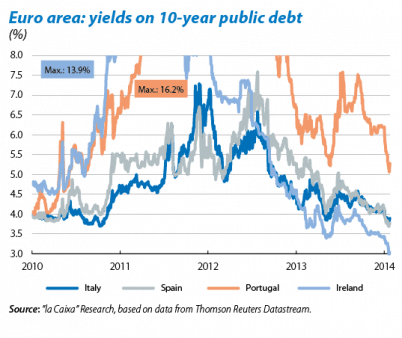 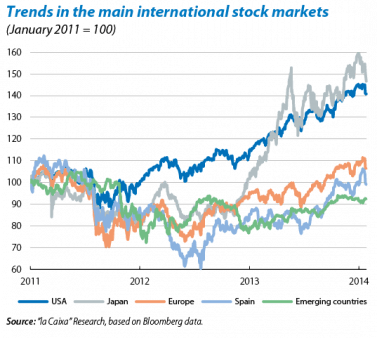