The pound’s depreciation: the thermometer that measures the impact of Brexit

After the victory of the Brexit camp in the referendum held last July, on the whole analysts predicted that the increased uncertainty would quickly result in a reduction in investment and consumption in the United Kingdom. This expectation was supported by an initial drop in most activity indicators. For instance, the composite PMI went from an area in line with economic expansion in June to an area in line with economic contraction in July and both the economic sentiment index and consumer confidence fell substantially.

However, in the following months indicators recovered from this slump and the economy continued to grow at a good rate. For example, GDP growth remained at a strong 0.5% quarter-on-quarter in Q3, bolstered by the good evolution of private consumption. It therefore seems that, for the moment, the impact of Brexit is much less than initially predicted.

Nevertheless, although activity has not suffered too much from the outcome of the referendum, this does not mean that Brexit will not end up having a significant impact over the medium term. One of the elements suggesting this is the strong depreciation of the pound which, to a large extent, reflects the UK’s loss of appeal in the eyes of international investors. Specifically, the day after the referendum the pound lost more than 8% of its value against the dollar and 6% against the euro and, since then, has accumulated a depreciation of 16% against the dollar and 11% against the euro.

The pound’s depreciation directly reduces the purchasing power of the British people. UK tourists already experienced this in the summer and, over the coming months, will end up noticing it on the domestic front as well, once they realise that the price of imported products has gone up more than their wages.1 According to a study by Kristin Forbes from the Bank of England, the impact of the pound’s depreciation on the end price of goods takes between 9 and 12 months to materialise.2 It therefore comes as no surprise that the Bank of England and analysts on the whole have substantially revised upwards their inflation forecasts for the coming years (see the second graph). Given this scenario, Britons may find some comfort in the effect the pound’s depreciation could have on exports. The conclusions reached by the studies analysing the relationship between the trend in exports of the United Kingdom and the pound over a long period of time are relatively encouraging. Specifically, they note that, with a depreciation in the real effective exchange rate such as the one occurring, namely 12%, growth in exports could increase by 2.4% in the short term and by 3.6% in the medium term.3 Recent experience, however, suggests this impact might be less. Between 2007 and 2009, the pound depreciated by 25% and, in the following years, exports did not grow by any more than those of its European partners.

In summary, the pound’s depreciation is a good thermometer for the impact Brexit might have on UK households. Although the effect is more gradual than initially predicted, the bulk of the evidence suggests that it will end up being noticed. 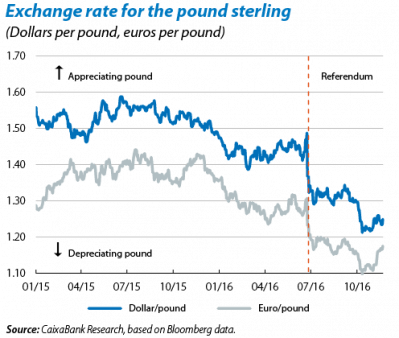