The return of foreign capital

The sovereign debt crisis reached its zenith when fears of a possible break-up of the euro started to cause significant capital outflows from the periphery countries. In 2013 this trend has completely turned around and international investors have regained notable confidence in Spain, as shown by the growth in foreign investment.

We can best see this change in trend in the performance of portfolio investment, which plummeted between 2011 and 2012. Specifically, in July 2012, cumulative net foreign portfolio investment over the previous twelve months was 139.9 billion euros lower than the same figure for July 2011. The exit of foreign investors was widespread throughout the different institutional sectors but was particularly marked in public administrations accounting for 43.8% of the total reduction. It was not until Mario Draghi announced that all necessary measures would be taken to guarantee the euro's future that this trend started to change, an announcement that, together with the institutional advances made toward a greater degree of coordination and integration at a European level, also helped to lessen doubts regarding the future of the single currency. Since then, net foreign portfolio investment has gradually made up the ground it had lost and, in July 2013, was already 190.5 billion euros higher than its figure one year earlier. This improvement has also been widespread, although once again public administrations recovered the most (52.7% of the total increase).

Similarly, this return of foreign investment is occurring without the cost of debt rising. In fact, the average cost of issuing public debt has fallen significantly with the average effective yield (not including the ESM) being 3.4% in 2012 while, on average, this year it has fallen to 2.6%. This improvement can also be seen in the private sector where corporate bonds are being issued at increasingly lower costs. For example, in August 2012 the average spread for issuances by financial firms was 390 bps while in October 2013 it was 147 bps, a trend that is also shared by non-financial firms.

Foreign direct investment (FDI) is generally more long term and therefore less volatile. In July 2012, net FDI was just 4.7 billion lower than the figure for the previous year, a drop of 17.3%. In July 2013, the increase was already 8.2 billion so that this loss has already been made up. In fact, in spite of the slump experienced in 2012, Spain was still one of the main European countries to receive FDI. In 2008, Spain was the fifth country to receive FDI with a total of 77.9 billion dollars and although this amount was substantially lower in 2012 (36.2 billion dollars), it remained in the top ten list of countries receiving FDI. 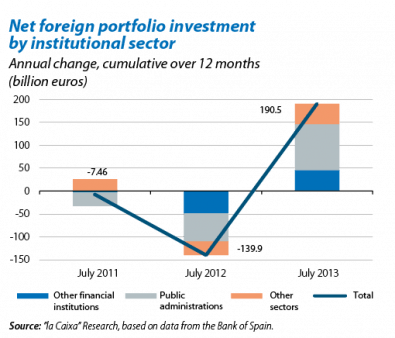 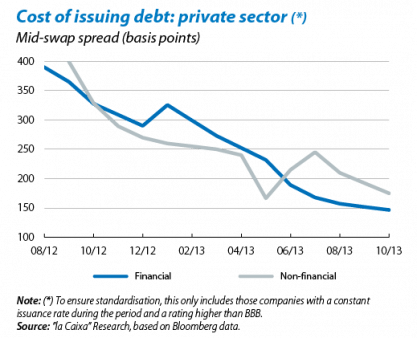 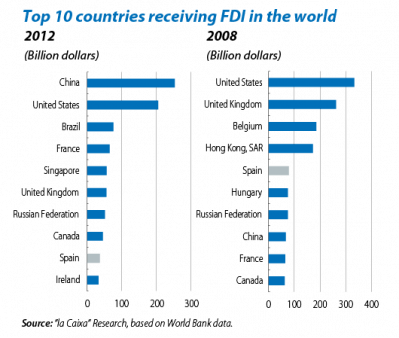