The scarcity of so-called «safe assets» has been an incredibly significant phenomenon on the international financial scene for some years now. The main causes are known but not so much the ultimate effects and, unfortunately, they could be detrimental to financial stability.

Most safe assets are sovereign debt securities issued by countries of proven solvency and institutional stability. Their common feature is therefore a very low level of credit and liquidity risk. In other words, these are assets that preserve all or almost all their value after adverse shocks hit the economy or during episodes of strong risk aversion in the markets. One clear example of this is the typical drop in yield (or the rise in price, which is the same thing) of public debt considered to be safe during financial storms (see the graph). In addition to providing a stable source of value when investors need it most, safe assets also fulfil other functions, particularly being used as benchmarks to produce and value a large number of bonds, risky assets and derivatives. They also play a crucial role in wholesale funding markets since they are used as collateral, enabling transactions to function normally in these markets. It therefore comes as no surprise that such features give safe assets a remarkable status, or that their price has traditionally been higher than that of other financial assets (known as the price of safety). Unlike risky assets and other sovereign bonds that are not considered safe, the search for yield has less impact on safe assets. However, the different forces of supply and demand emerging after the outbreak of the financial and economic crisis in 2008 have led to a relative shortage of safe assets. The immediate consequence is that their price has gone up; i.e. a fall in the real risk-free interest rate.

Two demand factors stand out from the rest. Firstly, greater macroeconomic risk perceived by economic agents due to the recession and, secondly, the large-scale public debt purchases carried out by the main central banks in the world, while other factors of a structural nature also have an impact, such as the tightening of regulatory criteria regarding liquidity standards in the financial sector. All this has taken place while the supply of safe assets has been in considerable decline. Firstly due to the implosion of securitization markets, resulting de facto in the closure of a significant source of assets considered safe up to 2008. Secondly because of the subsequent sovereign debt crisis in the euro area, entailing the loss of safe asset status held by the debt of many countries, including Spain. In 2006 64% of developed OECD countries held the top credit rating for their sovereign debt (AAA) while, by the end of 2015 Q1, this share had fallen to 34%. One last factor to take into account is the reduction in public sector borrowing and consequently of the supply of safe assets, resulting from the fiscal consolidation policy adopted by most developed countries over the last few years.

Although this shortage of safe assets is likely to ease in the long term, all the evidence points to the phenomenon continuing for the next few years and there are several risks resulting from this scenario, affecting various spheres. First of all, the over-positioning of investors in a search for safety in a shrinking number of issuers could amplify the volatility in their respective public debt markets. The functioning of secured money markets (where lenders demand a guarantee in the form of safe assets as security) could be disrupted should there be a shortage of eligible collateral. Lastly, as analysed by the next Focus «The challenges facing the pension and insurance sector in a context of low interest rates», if this situation of few safe assets and very low real interest rates continues, it will have a significant effect on the management strategy for the assets and liabilities of investors with a long-term investment mandate, such as pension funds and insurance companies. 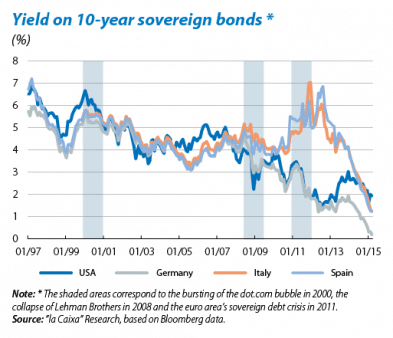