Over the last few years, flows of investment towards emerging countries have fluctuated considerably depending on the trend in global financial conditions. In fact, two years ago these countries experienced important turbulences when the then Chairman of the US Federal Reserve, Ben Bernanke, announced that the end to monetary stimuli could be sooner than expected at the time. Given this precedent, it comes as no surprise that one of the main sources of uncertainty in financial markets over the coming months revolves around the impact of official interest rate hikes in the US on investment decisions concerning the emerging bloc.

In increasingly integrated financial markets, the determining factors of investment towards developing countries are largely based on aspects of a global nature; for instance, the degree of risk aversion prevailing in financial markets. Indeed, given the higher risk generally associated with investment in emerging countries, it can be seen that the amount of capital flowing to these economies tends to decrease significantly in periods of high volatility and uncertainty in financial markets. However, there are signs that point to a recent increase in the degree of differentiation by financial agents when taking decisions to invest in such countries. The first graph supports this statement. The trend in stock market indices of 17 of the main developing countries shows an increasingly heterogeneous performance (in other words, the variance explained by their common factor has fallen steadily over the last few months). This result highlights the growing importance of factors idiosyncratic to each country in attracting investment. Historically, many different aspects contribute to this differentiation, especially the imbalances existing in each economy (both internal and external), growth prospects and stability in the regulatory or institutional environment.

One indication of this greater differentiation is the variation in the sensitivity of emerging equity to changes in global risk aversion (estimated by the VIX index of implied volatility for the US stock market).1 The countries where this sensitivity has increased the most, namely Russia and Brazil, are precisely those recording the greatest decline on the economic scene in the last year. In Russia's case, an 18% rise in S&P 500 volatility in the last year and a half (similar to the figure recorded in the turbulent period of May 2013) would lead to a fall in its stock market index of 10%. At the other end of the scale is the case of the Indian stock market, whose vulnerability to volatility in financial markets has decreased considerably in the last year and a half, in line with the correction of its economy's imbalances.

In short, the trend in the financial assets of developing countries is showing signs of growing differentiation. As a consequence, the doubts created by the start of US monetary normalisation regarding investment in these markets must be tackled with an approach that takes into account the particular features of the different countries. 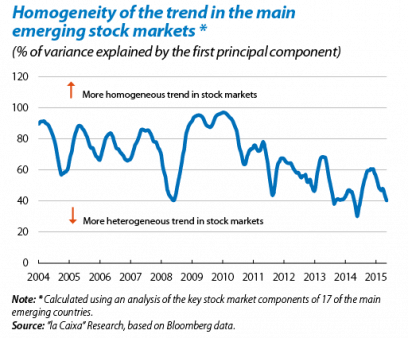 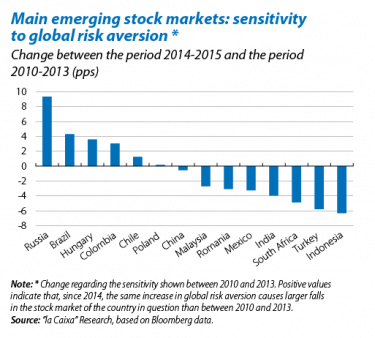