Signs of strength in the face of adversity

The recent trend in the markets has been marked by the appearance of new setbacks originating in the emerging economies. Firstly, the geopolitical conflict that has broken out between the Ukraine and Russia and the Crimea becoming annexed to the latter. Secondly, growing doubts regarding China's economic growth. And, lastly, the imbalances observed in Chinese capital markets. In spite of this, contagion to the international scene has been relatively contained, mainly affecting the stock markets in Russia and China. In general, the developed financial markets have seen gains by bonds (public and private) compared with an abrupt halt in equity gains. This situation could lead to moderate corrections in the short term given that several technical indicators and indicators for flows are now at worrying levels. However, overall we believe that these obstacles related to the emerging countries will tend to be limited in terms of intensity and frequency, clearing the way for global markets to function properly.

Investors discriminate between emerging risks. The tensions resulting from the territorial dispute on the Crimean peninsula were reflected in losses on the Russian stock market and the depreciation of the rouble and Ukrainian hryvnia against the dollar. Meanwhile, it seemed as if the rest of the emerging financial environment had only been slightly affected, as seen in the trend in some currencies such as the Indian rupee and the Turkish lira. However, China's negative economic news and the instability of its financial system represent a source of concern among investors. The recent bankruptcy of several investment vehicles and the Chinese central bank's conformity to this have increased doubts regarding the solidity of its credit system. Nonetheless, the Chinese economy is unlikely to deteriorate to any great extent. The Asian authorities have a lot of room to manoeuvre in the area of monetary, fiscal and macroprudential policy should there be a pronounced slowdown in growth.

The medium-term outlook is more encouraging. Although the aforementioned events have increased risk aversion among investors, it is also true that sentiment regarding the medium and long term has recovered. Among others, there are several aspects supporting such expectations: (i) the sustained improvement in global growth, (ii) the continuation of favourable monetary conditions, (iii) the reinforcement of the euro area, and (iv) the correction of imbalances in Europe's periphery. However, although the list of identifiable risk factors has shortened over the last few quarters, some significant ones still remain. One of these results from the new indications given by the Federal Reserve (Fed) as part of its forward guidance, where the lack of precision in terms of targets could destabilise the markets. Another factor is the growing attention being given to the risk of deflation in the euro area.

The Federal Reserve updates its forward guidance. After the last meeting of the Federal Open Market Committee, Yellen announced that interest rates will remain below their historical average even after inflation and unemployment reach their targets. Without referring explicitly to the 6.5% threshold for unemployment, unlike on previous occasions, the Fed has given up its strategy of quantitative forward guidance and has introduced qualitative variables related to the labour market, inflation and financial conditions. At the same time, it was also decided to maintain the rate of tapering, cutting back bond purchases by 10 billion dollars a month. Yellen also noted that the first hike in federal interest rates might occur six months after the end of QE3. However, the Fed's new communication policy, less precise and somewhat changeable, could cause episodes of contained volatility, especially if inflation picks up within the current context of wage rises.

Meanwhile, at its March meeting the ECB decided not to act. The institution has maintained its strategy based on a gradual recovery in domestic demand in the euro area and the correct functioning of the region's monetary markets. It also expects inflation to remain low for quite a long time but will not hesitate to act should deflationary risks intensify (see the Focus: «Inflation expectations and financial instruments: a valuable duo»). It has also ruled out possible action in the capital markets, encouraged by the strength of the euro's exchange rate against the dollar, in order to avoid adding any downward pressure on inflation, which is already very low. In this respect, of note is the more open approach seen in declarations by some members of the German Bundesbank regarding a possible programme of bond purchases by the ECB.

Periphery debt is progressing satisfactorily. The crisis between Russia and the Ukraine has helped yields on 10-year bonds from the USA and Germany to remain relatively stable, acting as a safe haven. In the short term, however, a more aggressive tone in the Fed's messages than the one initially perceived by the market and improvement in the Russian conflict could push up yields on both countries' debt. For its part, periphery sovereign debt has continued to show great resistance to any external problems. In March, the yields to maturity or YTMs fell in all tranches of the curves, helping to place Spanish and Portuguese debt issuances at very low interest rates. As a result of this situation, the sovereign risk premia of the periphery countries have evolved positively, boosted by increased expectations of further liquidity measures by the ECB given the risk of deflation.

Stock markets remain firm but keep a close eye on events in the Ukraine. Although, at first, the news from China and the Ukraine weighed heavy on international stock markets, stabilisation on the different fronts has ensured their recovery continues. Key factors such as low levels of volatility, attractive prices and large volumes of liquidity in search of returns are boosting western stock markets. Many companies are taking advantage of this situation to take their first steps on the stock market (see the Focus: «The resurgence of IPOs»). The US stock market has remained around its all-time high although signs can be seen of over-buying in stocks linked to the technology sector and small caps. In Europe, the Eurostoxx has also performed well. However, in the short term the exposure of several of its companies to the Ukraine and Russia could lead to certain corrections. For its part, the Ibex has returned to above 10,000 points, supported by the improvement in business indicators and the positive trend in sovereign risk.

The euro remains strong against the dollar. The exchange rate between both currencies has reached levels close to
1.40 dollars. Two factors have been decisive for this situation to arise: (i) the escalation in military tension in the Crimea, and (ii) the market's disappointment given the absence of expansionary measures by the ECB. However, greater expectations regarding possible interest rate hikes by the Fed in the first half of 2015 have helped to push the strong euro down to 1.37 dollars. The other relevant news on the foreign exchange market has been the enlargement of the yuan's fluctuation bands against the dollar to ± 2%. This decision, which responds to the Chinese authorities' attempt to allow market forces more leeway, has led to a fall in the yuan against the dollar. However, the Chinese currency is likely to appreciate over the year as a whole.

Commodities: reflecting the economic turbulence. The «flight to quality» caused by the conflict between Russia and the Ukraine has increased demand and therefore pushed up prices for safe haven assets. Gold's value is a clear reflection of this, with gains of around 8% this year so far. On the other hand, uncertainty regarding China's economic growth capacity has affected cyclical commodities: copper and iron, closely linked to industrial production, saw notable losses whereas the oil market continues to show remarkable stability, remaining within the band of 105-110 dollars/barrel. 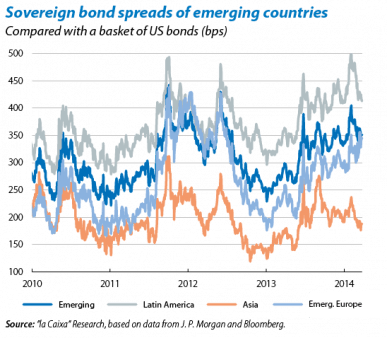 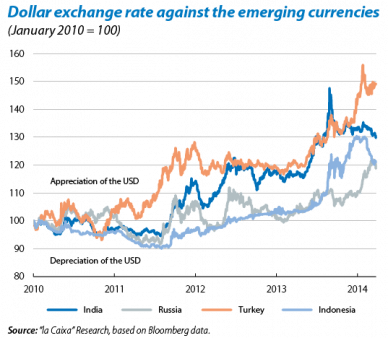 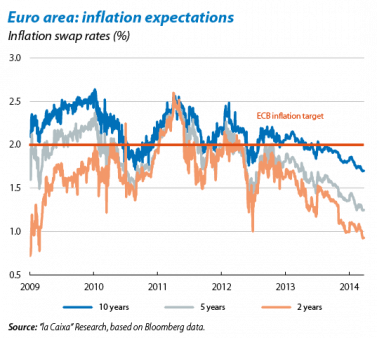 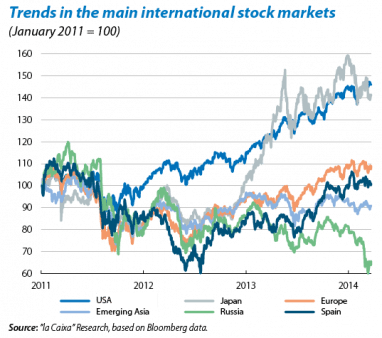 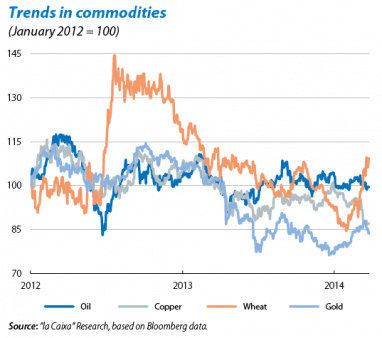