On 31 March the ratings agency Standard & Poor’s (S&P) improved the outlook for Spain’s sovereign debt from stable to positive. The US agency has therefore taken the first step towards improving the country’s credit rating over the next two years, which has remained at BBB+ since October 2015.1 Should the CaixaBank Research forecasts for the Spanish economy be accurate, the rating is likely to be upgraded sooner rather than later.

There are various reasons why sovereign debt credit ratings are especially important. Firstly, because they provide investors with valuable information on the risk associated with the country issuing the debt. In turn, this has a direct effect on the interest rates a public treasury must offer to secure financing. Secondly, because they directly influence the rating of the country’s companies. This is because a sovereign credit rating usually acts as a de facto floor when assessing the risk of a firm. In Spain, for instance, the average credit rating of Ibex 35 companies is between BBB and BBB–, two notches below the country’s rating (BBB+). A change in sovereign rating therefore has a direct effect on companies’ financing costs.

The start of Spain’s economic recovery in the second half of 2013 marked a shift in trend in the evolution of its sovereign rating. S&P successively downgraded its rating during the recessionary period of 2008-2012: from the dizzy heights of AAA to the threshold for junk bonds (BBB–). Since then, Spain’s credit rating has moved steadily back up, although it still has a long way to go to regain its pre-crisis level (see the first chart).

Over the coming quarters, the country’s favourable economic outlook suggests this positive trend is here to stay. On the one hand, the Spanish economy will continue to enjoy strong growth and may even outperform the expectations of the S&P ratings agency itself. CaixaBank Research forecasts expect GDP growth of 3.1% in 2017 and 2.5% in 2018, compared with S&P’s forecast of 2.5% and 2.1%, respectively. On the other hand, the country’s macroeconomic imbalances, both internal and external, are being corrected. CaixaBank Research predicts that Spain’s public deficit will continue to fall, reaching 3.1% of GDP in 2017 and 2.4% in 2018, somewhat more optimistic projections than those by S&P (3.3% and 2.9%, respectively). It is obviously crucial for Spain to continue improving its national accounts in order to convince investors of the medium-term sustainability of its public debt. Positive surprises in the fiscal sphere would surely be well-received by credit ratings agencies. Externally, the Spanish economy has been able to correct its large current account deficit thanks to the sizeable gains made in competitiveness.

Given this situation of solid performance and favourable macroeconomic prospects, the financial markets have begun to price in a sovereign rating upgrade. In particular, CDS rates (credit default swaps) for Spain’s sovereign debt have remained around 70-80 bp, a level comparable to that of sovereign debt rated Baa 1; in other words, one notch higher than the current rating (see the second chart).

Although Spain still has a relatively low credit rating, financing costs for both the public and private sectors have remained unusually low thanks to the ECB’s accommodative monetary policy. To avoid any upswings in financing costs, it would be useful for the sovereign rating to have regained the ground lost once monetary normalisation begins.

1. In the case of Moody’s and Fitch, Spain’s sovereign rating has been Baa2 and BBB+ since February and April 2014, respectively. 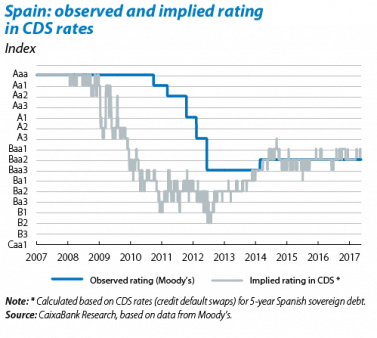 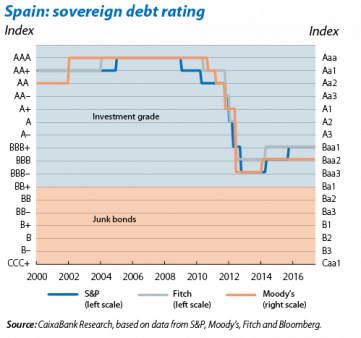