The Spanish stock exchange compared with Europe’s: time to make up lost ground?

Has Spain’s stock market rallied since it hit rock bottom in 2012? Yes, by an impressive 70%. So has it performed better than the European stock market? No, not by a long shot. This might seem strange considering, for example, the considerable reduction in Spain’s sovereign risk premium and the relative growth rates of both economies. Spain has consistently outperformed the euro area in terms of growth since Q4 2013.

A brief review of GDP trends in Spain and the euro area over the past 10 years helps to contextualise the relative performance of their main stock market indices. The benchmark stock market index for the euro area, Eurostoxx, fell by 58% between 2007 and 2013 and, over the same period, GDP in real terms decreased by 5.5%. In Spain this slump in the stock market reached 64% and the cost in terms of its GDP was much higher, dropping by 9.5% (see the first chart).

The figures for the recovery since the lowest point of the crisis are also revealing. In March 2017, the euro area’s stock market was 15% below its pre-crisis peak while the Spanish stock market was 40%. In terms of GDP, the euro area was 3% higher that its pre-crisis peak while the scars have taken longer to heal in Spain and its GDP was still 0.4% below its respective peak. But the longer time taken by the Spanish stock market to recover is less surprising when we look at the different positions of both economies in the recovery phase.

The main reason for Spanish and European stocks performing differently is the trend in corporate earnings for each area. Earnings for Spanish listed companies have performed less well than for Eurostoxx companies.1 It therefore comes as no surprise that investors have adopted a more cautious approach with Spanish equity.

Two fundamental factors help to explain why Eurostoxx firms have performed better than Spanish listed companies. First, the large share of banks in the Spanish stock market (37% compared with 12% in the euro area). In general, bank profits have been lower than corporate earnings overall as the sector has been hit hard by ultra-low interest rates. The second factor is the sizeable exposure of Spanish companies to Latin America. Spanish firms get between 20% and 25% of their income from this region and its sharp economic slowdown has affected their performance.

On the whole, if we exclude the Spanish stock market’s greater exposure to both factors, the gap between it and the European stock market since their respective minimums up to March 2017 would fall from the aforementioned 32% to just 4%.

In short, an analysis of the factors underlying the different performances by Spanish and European equity provides a relatively optimistic scenario. Over the coming quarters, monetary conditions are likely to get back to normal and the main Latin American countries should start to enjoy stronger growth. Spain’s macroeconomic outlook is also still highly favourable.

1. The difference between the annual average growth in earnings of listed companies from the euro area and from Spain since 2012 is 8 pp. 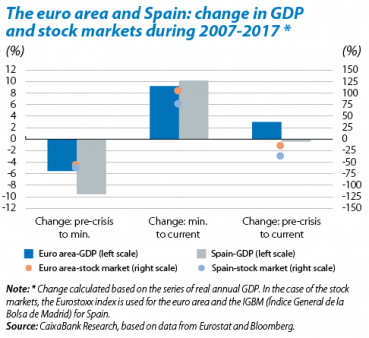 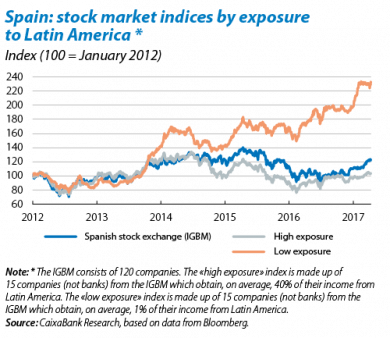