One of the most remarkable macroeconomic developments in the last few months has been the substantial increase in the dollar's value, appreciating by more than 10% year-on-year compared with the basket of main currencies. As a result, many emerging currencies have lost value against the greenback, with countries such as Russia, Hungary, Poland, Colombia, Chile, Brazil and Mexico all seeing double digit depreciation. Given that the dollar's appreciation is occurring at a time when the volume of international debt (public and private debt held by non-residents) issued by many emerging countries is growing, and that such issuances are mostly in dollars, there is good reason for concern: might we be witnessing the run-up to an episode of financial stress caused by emerging countries finding it difficult to repay their debts?

In order to answer this question, first we need to contextualise the recent trend in international debt. Certainly this has grown substantially: according to data from the Bank for International Settlements, between 2010 and 2014 the outstanding balance of international debt (both public and private) for 15 benchmark emerging countries as a whole grew by 82%, around 20% annually on average. The international debt of developed countries remained almost stable over the same period. The question is therefore relevant.

However, when we look at a longer timescale and compare this with GDP (a more effective measure to determine a country's capacity to repay than absolute sums), it can be seen that although there has certainly been an upward trend in the international debt of the group of leading emerging countries over the last few years, this has not reached historically high levels. In fact, the levels in 2014 were below the long-term average of 1992-2014. And if we look at external debt rather than debt securities, a broader concept that also includes loans, credit and other liabilities in addition to debt securities, the conclusions remain the same: there has been clear growth since 2010 but the current levels cannot be considered excessive in historical terms.

This conclusion is even more comprehensive when we analyse the differences between countries. Among the main emerging economies, seven countries have seen above average growth in external debt from 2010 to 2014: South Africa, Malaysia, Poland, Turkey, Chile, Mexico and Venezuela. However, of these, only the first two are at their highest levels of external debt since 1990. This disparity between countries is repeated when we look at the room to manoeuvre of those most affected by the accumulation of external debt. One typical way of tackling this question is to compare a country's short-term external debt with its level of reserves. It should be noted that, in a situation of exchange range uncertainty and external financing, a country's reserves determine its ability to respond.

So when we compare the level of reserves with short-term external debt, the only country whose reserves do not cover its short-term external debt is Venezuela. At the next level of risk are those countries whose reserves cover less than twice their external debt1: Turkey, Malaysia, Argentina, Hungary, South Africa and Mexico. Should we be concerned about these six countries? The likelihood of an episode of uncertainty occurring can be related to the quality of their macroeconomic fundamentals. In this respect, when their main imbalances are analysed (inflation, public deficit and current balance), we can see that South Africa has accumulated the most challenges (with excessive imbalances in the three variables mentioned). Some distance after it comes Turkey, with high inflation and a high current deficit, and therefore also relatively at risk. In the case of Argentina the main problem is inflation, which is high and has poor prospects, as well as a worrying upward trend in the country's public deficit (although the current levels are not alarming per se). The other members of the group seem to be more protected: Hungary and Malaysia have a current account surplus and do not suffer from any excessive inflationary tensions while Mexico's imbalances remained stable (and at levels that are not excessive for the country) in 2014.

1. This is the threshold for sufficient capacity to respond to an external financing crisis. For example, it is equivalent to the amount of liquidity that would cover capital outflows similar to those in the 2008-2009 crisis, the last widespread episode of such characteristics in the emerging economies. 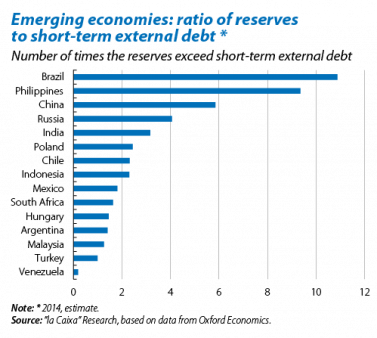