A turbulent start to the year in international financial markets. Global risky assets started 2016 in the same state as they ended 2015: highly volatile with huge drops in price. The severity of the correction surprised investors and analysts, reawakening unpleasant memories of what happened after the global financial bubble burst in 2008. As was the case during the second half of 2015, there are two factors underlying this situation. Firstly, the doubts regarding the Chinese economy, reinforced by the devaluations carried out by the People's Bank of China (PBoC hereafter) on the yuan. Secondly the slump in oil prices which intensified in January, bringing a barrel of Brent down to 27 dollars, its lowest levelin 12 years. The notable increase in the correlation of crude oil with the price of risky assets over the last few months highlights the risk-off mode of global financial assets at present. Although it is not clear how long this phase will last, it will more than likely lose steam over the coming months as the underlying fundamentals of the different asset markets gradually take control.

The size and duration of this sell-off points to international investors increasingly lining up for a slowdown in global growth. However we believe they have overreacted and fears of a sharp slowdown in world growth are excessive. In this respect, the contribution of underlying levers should continue to be positive on the whole: satisfactory growth in the US, sustained recovery in the euro area and Japan, accommodative global monetary conditions and a controlled economic slowdown in China. Nevertheless the current conditions are not very conducive to a more constructive climate in the markets in the short term. Firstly due to factors of global scope such as the weakness in commodities in general and oil in particular and the «noise» coming from China, and secondly due to a worsening outlook for corporate earnings in the US.

The uncertainty from China will continue to be an important but intermittent risk factor. Of particular relevance will be possible intervention by the PBoC in the foreign exchange market, particularly after the episodes of global aversion due to the yuan's devaluations. The likelihood of there being further devaluations against the dollar is high but we do not expect these to be significant. Aggressive devaluation of the yuan would have negative repercussions for China on two fronts. On the one hand it would jeopardise the yuan's internationalisation as a reserve currency and, on the other, would help to intensify capital outflows. Regarding the economic situation of the Asian giant, the underlying dynamic is still one of weakness due to its transition towards a more balanced model of growth. Although it is true that the balance of risks is still downwards, we still believe that the Chinese government has enough capacity to accommodate monetary and fiscal policy. Investors must therefore live with this situation for a large part of 2016, which will lead to episodes of moderate volatility.

Meanwhile the Federal Reserve (Fed) keeps to its monetary strategy. At its first meeting after raising the fed funds rate last December, the Fed maintained its benchmark rate unchanged. The Chairman of the monetary authority, Janet Yellen, stressed the appropriateness of continuing to carry out this process gradually, although the official communication had a more cautious tone than expected. The Fed pointed out that it is «closely monitoring global economic and financial developments» and indicated that both factors might affect the balance of risks for the country's macroeconomic situation. With regard to economic activity, it recognised that this slowed down in the last part of 2015 but noted the strength of the labour market. Regarding prices, it referred to the decline in inflation expectations in the bond market but underlined that survey-based inflation expectations remain stable.

Given the current circumstances of aversion and doubts of markets internationally, the Fed's firm commitment to tighten up interest rates is crucial. Should it wait too long to carry out further hikes in the federal funds rate, this might be counterproductive if the community of investors perceives the Fed does not have the necessary control to implement its strategy. Market expectations suggest that the second interest rate hike will take place mid-2016 although the last quarter of 2016 is increasingly more likely.

For its part the ECB is opening the door to adopting more stimuli in March. The consensus expected the meeting of the Governing Council of the ECB to be a formality but the accommodative tone of Mario Draghi's messages took them by surprise. The European President stated that hewas ready to «review» the ECB's monetary policy stance at its next meeting in March. Regarding the central bank's policy to comply with its inflation target of «below but close to 2%», Draghi also maintained that «there are no limits» provided these instruments remain within the institution's mandate. The weaker situation of the emerging economies, falling oil prices and financial instability were the main reasons for the dovish tone used by the ECB's President. However, it is important to stress that further monetary stimuli may not be adopted in March, which would lead to disappointment in the market. What happened after December's meeting is a lesson in point. We believe the ECB will only decide to act (further cuts in the depo rate, extending QE) if there is significant deterioration in the macroeconomic situation or an increase in financial instability.

The climate of risk aversion boosts safer public debt. Yields on US and German government bonds fell due to larger flows searching for a safe haven. In the first case, the 10-year Treasury yield has fallen by 30 bps since the end of December to below 2%, while yields on the German bund have fallen to the zone of 0.4%. In Spain the 10-year risk premium has shown a more volatile trend (between 120-130 bps) due to the country's political uncertainty while, in Portugal, the new government's fiscal commitments and difficulties in managing the sale of Novo Banco have pushed its risk premium up to 250 bps.

International stock markets are shaken by a disastrous start to the year. There have been significant losses (in the order of 7%-12%) in almost all stock markets, both in the advanced bloc and the emerging. In the US, the S&P 500 has fallen by 6%, its worst start to the year since 2009. The collapse in the price of crude oil continues to be a huge burden for energy and mining industries. In addition to this last factor, losses on European stock markets have been accentuated by the bad performance in the automobile and banking sectors. In this last case the epicentre was in Italy, due to doubts regarding the restructuring of bank balance sheets. Nonetheless, we interpret this episode as a temporary source of uncertainty that could diminish once the Italian government presents the details of its plan for this restructuring.

In the US, the corporate earnings season for 2015 Q4 is providing some positive surprises, mainly in technology and finance. Unfortunately, this circumstance is unlikely to reverse the downward revisions of corporate earnings expectations, nor the current conditions of over-selling, although they may give rise to short-lived temporary upswings. However, the upward trend will resume as greater certainty is perceived regarding the two main sources of market volatility (oil and China). Price-earning ratios, whichin some cases are below the long-term average, will represent a source of support, particularly in emerging stock markets.

The euro-dollar exchange rate remains stable but emerging currencies still fail to stabilise. The trend in the euro against the dollar has seen only small fluctuations and weak activity figures in the US maintained the euro within the range of1.08-1.10 dollars. We have not altered our medium-term view for the euro-dollar exchange rate, which we expect to be around 1.05 dollars. Regarding the emerging currencies, the main ones continued to weaken due to the factors of China and oil. This is the case of the Russian rouble which has reached another all-time low against the dollar, nowat 78 roubles. The Argentine peso has also come under alot of pressure although, in this case, it is due to the new government's decision to make the exchange rate mechanism more flexible and put an end to capital controls. 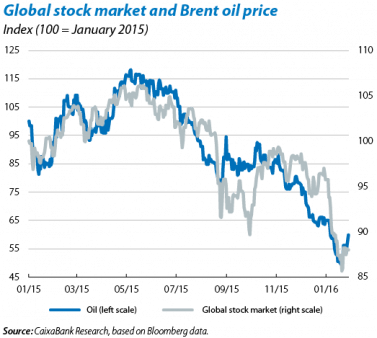 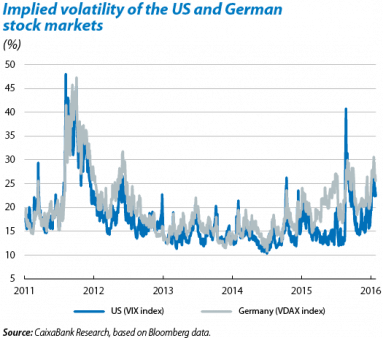 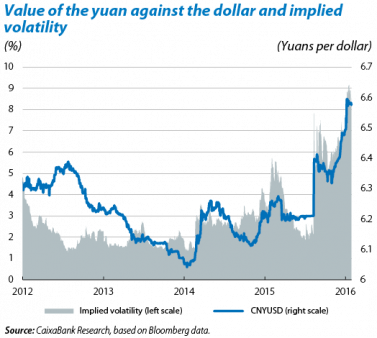 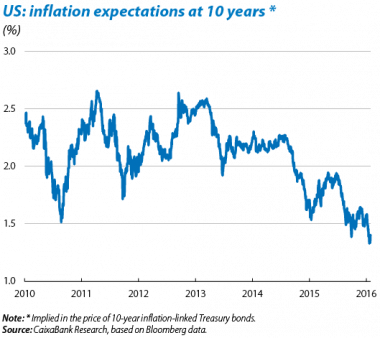 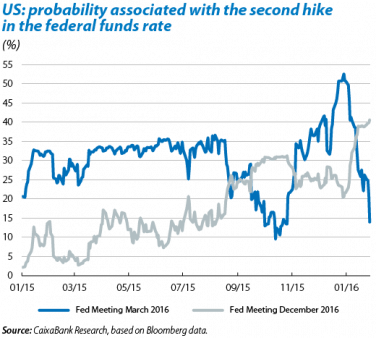 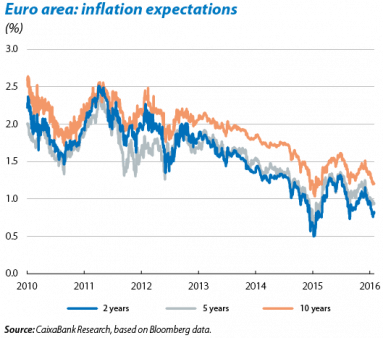 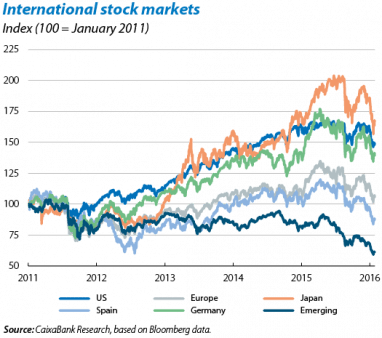 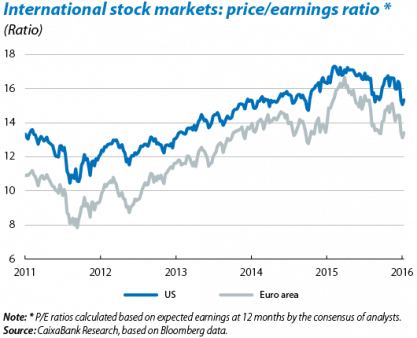 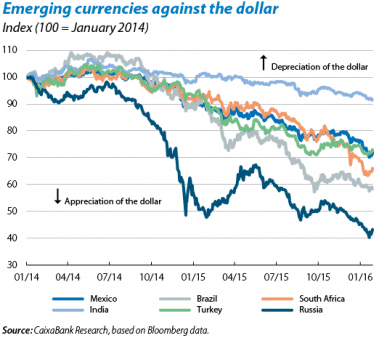