Oil prices have moved centre stage again, this time to the joy of importing countries with the price of Brent oil accumulating a sharp drop of 25% between July and October, plummeting to 84 dollars per barrel, a level not seen since 2010. This put an abrupt end to the long period of stability seen since mid-2012. Various factors have contributed to this fall, some short-term but others of a structural nature, some related to supply and others to demand. Such complexity makes it difficult to determine each factor's influence and complicates any definite projections. However, a few issues can be quite clearly identified.

Demand factors are having the most impact in the short and medium term. The cooling down of world growth prospects due to upsets in the euro area and some emerging countries has led to a widespread reduction in the forecasts for global commodity consumption, naturally including crude oil. For example, since last June the International Energy Agency (IEA) has cut its growth forecast for the world demand of crude in 2014 from 1.3 mb/d to 0.7 mb/d. These new expectations have altered the behaviour of oil-related agents and not just end consumers. In fact, «pseudo-financial» operators in derivative crude oil markets have also left their mark: the hasty closure of the large number of long speculative positions held at the start of the summer has helped to increase the downward pressure on oil prices (within an overall risk-off situation). Meanwhile developments on the supply side have not helped to curb this. Of note is Saudi Arabia's reticence to cut production (the largest producer of the OPEC countries with one third of the total), possibly due to a strategy aimed at defending market share now that the United States is reducing its imports and even thinking of exporting hydrocarbons from the shale revolution. In addition to this is the renewed dynamism in the production of countries such as Libya, Iran and Iraq. And a financial factor has also come into play on the supply side: the appreciation of the dollar, allowing exporting countries to maintain revenues in spite of the drop in the dollar price.

In short, we have witnessed a rather unusual convergence of downward pressures acting on the price of crude oil. Some will gradually disappear and even change direction. Two will be crucial: the disappearance of fears of a euro area recession with global repercussions and the continuation of reasonably high growth rates in large emerging countries such as China and India. At the same time, the two financial factors mentioned above will also ease eventually. Moreover, OPEC is likely to end up agreeing measures to stop oil prices from falling any further, and sooner rather than later. We therefore expect the price of Brent oil to pick up next year, coming close to 100 dollars a barrel and going slightly above this level in 2016.

Nevertheless, the long-term prospects are more uncertain due to the emergence and growing importance of the technological factor, its paradigms being the aforementioned boom in the US, and other countries, of shale oil (extracted via fracking) and Canada's tar sands. In fact, according to a report by the IEA, the United States could become the world's leading oil producer by 2017. The perfecting of extraction techniques, as is also the case with storage and distribution methods, is resulting in a larger and more flexible supply, prolonging the downward pressure on prices. The question is how such technological changes may affect the future of the crude oil market. 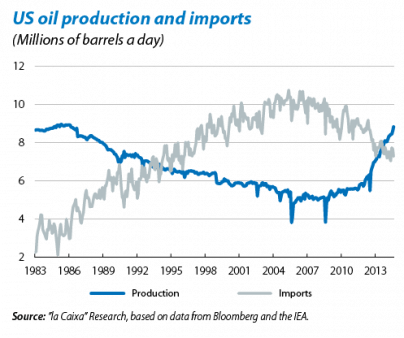 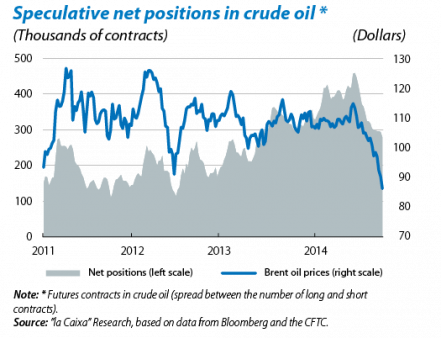