US equity prices: a cause for concern?

Since the beginning of the year, the main US equity indices have posted all-time highs. The S&P 500 has increased by over 200% since Q1 2009, when the main stock market indices began to pick up, more than 14% in annualised terms. The Dow Jones trend has been similar while the Nasdaq has performed even better, up by more than 330%, almost 19% in annualised growth terms. This prolonged and sustained rise in equity prices has raised doubts and concerns about its sustainability and possible decoupling from economic fundamentals. The Bank of America Merrill Lynch fund manager survey warns that the vast majority of investors believe the stock market is overvalued.

While accurately identifying a financial bubble as it is forming is no easy task, a number of indicators can help us gauge whether assets are overpriced. In general, there are two types of indicators. The first reflect investor behaviour and investment strategies. For example, a search for short-term yield. Such behaviour tends to be accompanied by a decoupling of the observed asset price and its long-term fundamental or sustainable value. One of the benchmark indicators is the proportion of margin debt. Recent developments in the US are a clear warning sign. Margin debt totalled almost USD 600 billion in August according to official New York Stock Exchange data. This is a record figure, much higher than the figure before the dot.com bubble burst and the 2007 financial crisis erupted.

However, attention should also be paid to indicators which, more directly, attempt to assess whether an asset’s price is in line with its fundamental value. As discussed in the article «Bubble economics: an insight into effervescent prices» in this Dossier, estimating an asset’s fundamental value is far from straightforward. This requires the calculation of the present value of expected future cash flows. The CAPE ratio (Cyclically Adjusted Price to Earnings), developed by Nobel Economics Prize winner Robert J. Shiller and measuring the relationship between share price and average corporate earnings over the past 10 years, is often used as a benchmark in assessing whether the stock market is moving away from its fundamental value. The S&P 500 now has a CAPE ratio of over 31 points, well above its historical average of around 17. The current CAPE ratio is actually close to the levels observed in the 1929 crisis. Nevertheless, it is still far from the peak reached before the most recent bubble, the dot.com, in the 2000s (see the first chart).

The overvaluation suggested by these indicators may be qualified by certain factors, however. First, technology stock seems to be particularly overvalued, especially since mid-2016 (see the second chart). Second, while a large margin debt levels may seem worrying at first glance, this does not always mean that a bubble is forming. In fact, according to figures dating back to 1959, every time margin debt has reached an all-time high, the S&P 500 was just as likely to post a positive return one year forward as after a month without record-breaking levels of margin debt.

Finally, a third element to take into account when assessing high equity prices is the current environment of low interest rates and especially the fact that this situation is unlikely to change to any great extent for some time to come. In an environment where interest rates are expected to remain very low, the present value of future cash flows increases.

Consequently, equity does not seem to be as overvalued as it looks as long as interest rates end up being as low as the market expects. However, while there is some consensus that interest rates are very likely to remain below their historical average in the coming years, just how big this downward adjustment will be is very uncertain.1 Should interest rates eventually be higher than market expectations, this could lead to a correction in US stock market indices.

Another simple exercise helps to gauge the extent of this phenomenon. If the long-term interest rate suddenly changed to 4% (it is currently around 2.4%), the historical relationship between the CAPE ratio and interest rates suggests that the S&P 500 would fall by approximately 17%.2 Naturally, this hypothetical exercise should be taken with due caution. For example, it does not take into account the reasons for this hypothetical rise in long-term interest rates, let alone the consequences for economic activity as a whole. Interest rates are actually expected to rise gradually as economic activity and corporate earnings grow. In any case, at current CAPE levels, very large gains cannot be expected in the future since history suggests that, at times of high CAPE ratios such as those currently observed, the expected return for the US stock market over the following 10-year period is around 5% per year (see the third chart).

At present, the US stock market is also sensitive to two additional factors: geopolitical uncertainty, such as the tensions with North Korea, and the reforms proposed by the Trump administration. Over the coming weeks, Congress is expected to approve a tax reform which has been warmly received by investors. However, the other electoral measures proposed, such as boosting public investment or a shift towards a more protectionist trade policy, have yet to be implemented.

All in all, there is every indication that the uncertainty surrounding high share prices in the US will continue over the coming months. In the short term, questions regarding the new equilibrium interest rate will not be resolved, while the uncertainty due to geopolitical factors and the Trump administration’s agenda is unlikely to disappear. However, the risks appear to be imbalanced and a correction is more likely than a continuing upward trend in equity prices.

2. Earnings over the past 10 years are assumed to remain constant. 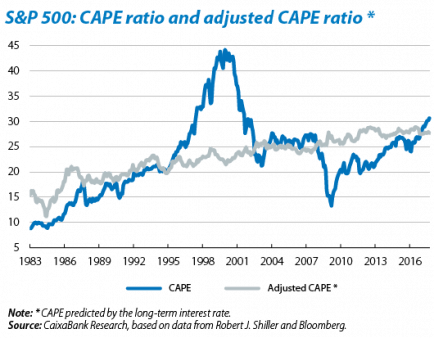 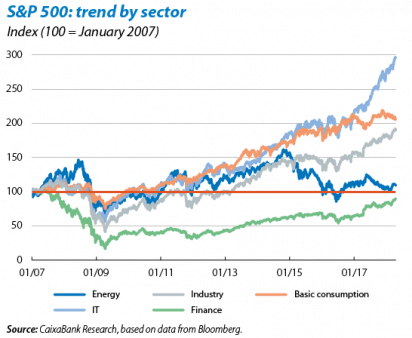 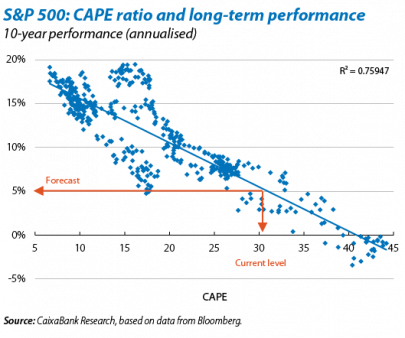