Risk aversion sets the tone for the beginning of the year. The cooling of tensions between the US and China, reflected in the signing of the first phase of the trade agreement, the stabilisation of the outlook for economic growth and the confirmation of an agreed Brexit on 31 January gave continuity, in the first sessions of 2020, to the cautiously optimistic sentiment with which investors had faced the end of 2019. Furthermore, the spike in political tensions between the US and Iran was noted only briefly in the financial markets, while investors also benefited from the commitment on the part of the major central banks to a dovish monetary policy, which they reiterated in their first meetings of the year. However, market sentiment was shaken by the health emergency of the coronavirus originating in China, which triggered a surge in risk aversion due to fears that it could restrict economic activity over the coming months (especially in China and its major trading partners). Thus, January ended with setbacks in the prices of securities closely linked to the business cycle, such as stocks and commodities, and gains in the prices of safe-haven assets, such as US and German sovereign debt, gold and the yen.

The central banks reiterated their commitment to accommodative financial conditions. On the one hand, in its January meeting the ECB was slightly more optimistic about the economic scenario, but kept a downward bias in the risk map (due to geopolitical factors, protectionism and vulnerabilities in emerging economies). In this way, it reiterated its commitment to the asset purchases amounting to 20,000 million euros a month which it began in November, as well as its intention to leave interest rates unchanged (keeping the depo rate at –0.50%, the refi rate at 0.00% and the marginal lending rate at 0.25%) until there is a robust recovery in inflation. Thus, having reinforced its stance of not altering monetary policy in the coming quarters, the ECB focused its January meeting on the formal announcement of a review of its monetary policy strategy. This will include an assessment of possible changes to its inflation target, the effectiveness of its monetary policy tools and the role it can play in combating transformations such as climate change (we analyse this in the article «The ECB and the Fed: two mandates, one target» in this same Monthly Report). The US Federal Reserve, meanwhile, also kept interest rates unchanged in the 1.50%-1.75% range. The decision was unanimous and was supported by a «cautiously optimistic» assessment of the macroeconomic scenario, in the words of Chair Jerome Powell, which reflects the alleviation of the sources of geopolitical risk (the trade agreement between the US and China, and an agreed Brexit on 31 January) and some signs of improvement in the global industrial cycle. Looking ahead to the forthcoming meetings, the Fed showed little willingness to alter its interest rates and Powell stressed that this would require a significant change in the US’ economic outlook. Finally, the Fed indicated that it expects to begin to cut back its Treasury Bill purchases and its injections of liquidity into the repo market in Q2 2020, as it believes the system is close to having a sufficiently abundant reserves.

Sovereign yields cede ground. The good tone of investor sentiment in the first sessions of the year and the prospect of a dovish monetary policy throughout 2020 sustained an environment of relatively stable interest rates in the early weeks of January. However, this was interrupted by the surge in uncertainty linked to the coronavirus, which triggered a sharp decline in sovereign debt yields (of around –40 bps in the US and –25 bps in Germany) due to the traditional value of government debt as a safe-haven asset. In the euro area periphery, meanwhile, risk premiums remained stable in Portugal (with Moody’s keeping the country’s sovereign rating at Baa3 with a positive outlook) and in Spain, while Italy’s risk premium fell by more than 20 bps after the regional election results alleviated investors’ fears of a breakdown of the national coalition government.

Business profits show their friendlier side. In the context of risk aversion with which January came to an end, the major stock market indices were adversely affected by the rise in volatility and concluded the month showing mixed signals. On the one hand, the European and Emerging market indices registered losses (EuroStoxx 50: –2.8%, MSCI Emerging Markets: –4.7%), driven by the fall in the stock prices of those sectors most exposed to the economic impact of the coronavirus, such as tourism, energy and luxury. On the other, the North American stock markets closed with hardly any changes (S&P 500: –0.2%), favoured by a good start to the business profits campaign of Q4 2019. Up to the time of this publication, 40% of the companies of the S&P 500 had published their results, with better performance on the whole than that expected by the consensus of analysts, mainly in the financial and technology sectors.

The oil price falls in the face of uncertainty over demand. In the commodity markets, the price of a barrel of Brent was also subjected to an environment of volatility. At the beginning of the month, the political tensions between the US and Iran and the interruptions of supply in Libya and Iraq drove the price up, briefly surpassing the 70-dollar mark. However, the episode of risk aversion triggered by the coronavirus ended up pushing the price of crude oil below 60 dollars.

Emerging currencies continue to depreciate. Among the currencies of the advanced economies, the flows of capital towards safe-haven assets strengthened the Japanese yen, the Swiss franc and the US dollar, while the euro continued to fluctuate around 1.10 dollars. On the other side of the coin, there were depreciations of most emerging economy currencies (the set of currencies of the emerging bloc depreciated by more than 2% against the dollar). This was also the case for currencies of economies that are highly dependent on commodity exports (such as the Australian dollar and the Brazilian real), as they were weakened by the fear that a new blip in global economic activity could weigh down the value of their exports. 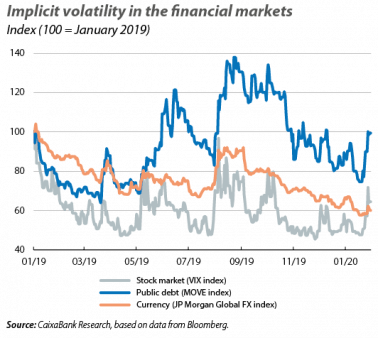 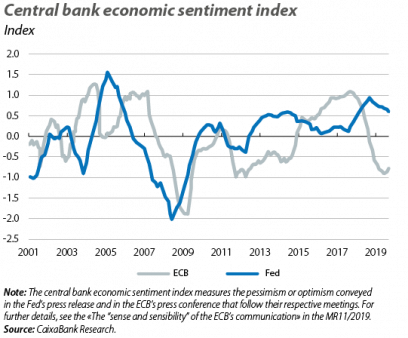 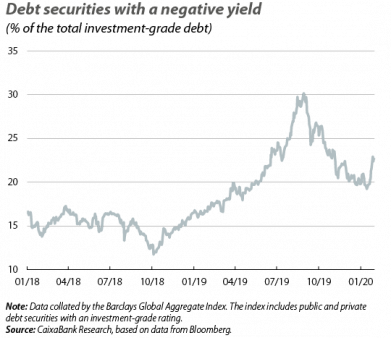 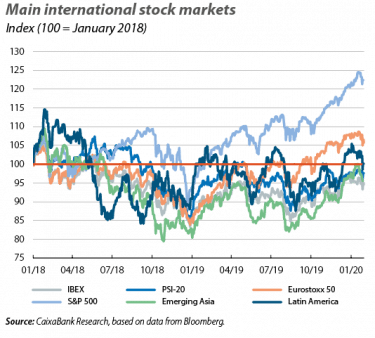 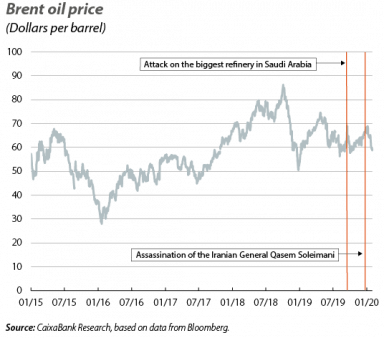 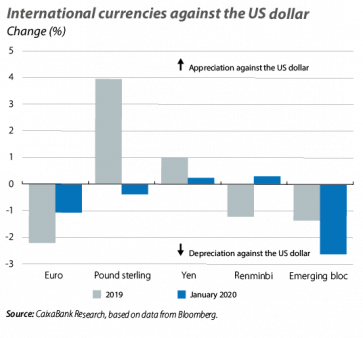