In a monetary union, labour costs are an important factor in determining the relative competitiveness of its member states. If a euro area country posts a sustained rise in unit labour costs (ULC)1 greater than the rest of the countries, it loses competitiveness and cannot resort to a currency devaluation its to regain it. This situation is not viable in the long term. Here we analyse the trend in labour costs in the main euro area countries and what might be expected in the near future.

The trend in labour costs in the euro area over the last 15 years reveals a change in the situation before and after the crisis in 2008. Before the crisis, Germany was gaining in competitiveness compared with its trading partners. ULC remained stable in Germany due to wage restraint and also improvements in labour productivity. In Spain and Italy productivity remained at a standstill while real wages rose at an annual rate of 2.6% and 3.0% respectively, increasing ULC. In France, although productivity grew at similar rates to those of Germany, wages rose further.

Over the last few years this situation, unsustainable in a monetary union, has changed substantially. Spain has gained part of the relative competitiveness it had lost as CLU are still stable thanks to wage moderation and improved productivity. However, this has not been the case for France or Italy. Although wage increases have moderated in France they still exceed the country's improvements in productivity while, in Italy, ULC have continued to rise particularly because of losses in productivity. Part of the competitiveness lost by countries in southern Europe is also being recovered thanks to the trend in German labour costs which have been rising after the crisis without its productivity improving.

This shift in relative competitiveness might continue due to the differences in the economic cycle between euro area economies. According to IMF estimates, Germany has already closed its output gap, unemployment is at an all-time low and the bulk of the evidence suggests the country will grow at a rate above its potential in the short and medium term. All this should increase pressure on wages. In fact, wages grew by about 1.7% in 2014 and the wage increases agreed for 2015 and 2016 in various collective agreements (such as the metal and chemical industries) are already higher than 3% on average.

Spain, Italy and France are still suffering from substantial excess capacity, which should result in less wage pressure this year if wage developments follow the economic cycle. This has already been the case to some extent, particularly in Spain and Italy where wages rose by 0.7% and 0.4% respectively in 2014. In France, however, the rise was 1.4% in spite of the country's weak economic growth.

In short, the economies of the euro area need to contain and make their ULC converge, both via wages and productivity. A diagnosis by country has shown just how far each economy still has to go. Neither Germany nor its European partners can lose sight of the fact that they need to increase labour productivity and wages only as long as productivity improves. It is also vital that ULC between countries converges. The errors of the past should not be repeated.

1. Unit labour costs (ULC) correspond to the ratio between labour compensation per employee and labour productivity (measured as GDP in real terms per employee). 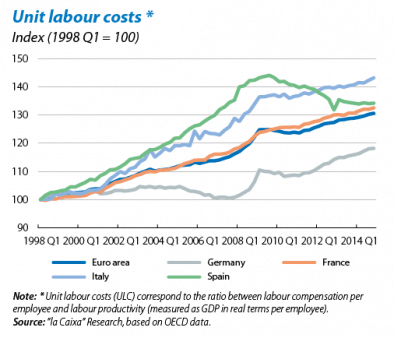 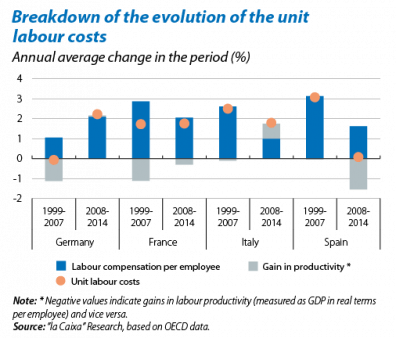