Employment and innovation: a key combination for the labour market to recover

In 2014 the Spanish economy created jobs for the first time since 2007 and the figures were quite impressive: the increase in the number of employed totalled 433,900 people. Now that the recovery is starting to build up steam in the labour market, it is a good time to analyse which sectors are creating employment. Whether the economic recovery turns out to be strong and sustained will depend on whether the most innovative sectors gradually gain in importance.

Net employment in industry and services grew by 409,600 people in 2014.2 After distributing these new jobs by the innovative intensity of each sector, we can see that most are concentrated in industries with low innovation (see the first graph). However, this figure should not come as a surprise as 40% of the jobs are concentrated in this kind of sector. The services sector, for example, has a lower innovation rate than industry and employs 82% of all workers considered.

To analyse whether the recovery in employment is due to the more innovative sectors taking centre stage, it is vital
not to focus on the figures in absolute terms but look at the contribution to the increase in employment of each sector in relation to its relative weight. This is precisely what the second graph shows, where it can be seen that a significant proportion of average innovation sectors in industry contributed more to the creation of jobs in 2014 than the number corresponding to their relative share of all employment. Of particular note are the increases seen in employment in the energy and food sectors. Some high innovation sectors in industry also performed very well (motor vehicles, chemicals, pharmaceuticals and petroleum) although this cannot be seen overall as some sectors from the same group destroyed jobs, such as the electrical material sector. On the other hand, the average and high branches of innovation in services performed badly and the least innovative sectors contributed the most to the rise in employment, not just those related to tourism.

In short, although it is true that many industries with high rates of innovation are creating jobs, this is still not a widespread phenomenon. For the encouraging recovery in the labour market to consolidate, innovation and job creation must go much more hand in hand.

1. A more complete analysis should also take into account the intensity of innovation in each sector but, given that the innovation intensity index is closely correlated with the percentage of innovative firms, the results are similar.

2. The employment data exclude public administration and education to make them comparable with the sectors available in the Survey on Innovation in Companies. 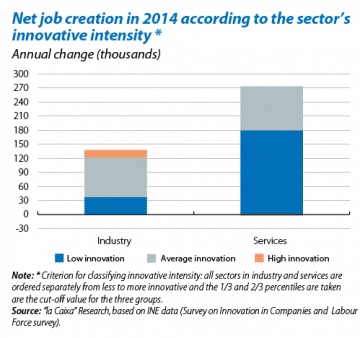 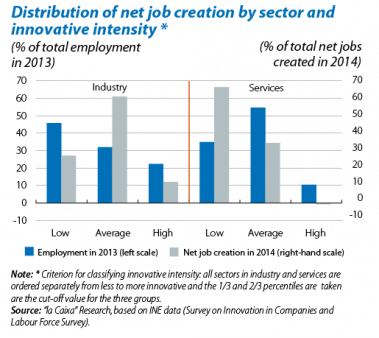