The French government's commitment to reforming the French economy: one for all and all for one?

The French government presented its Budget for 2016 at the end of September, continuing the relative fiscal consolidation underway for several years now and predicting a gradual recovery for the French economy which should achieve GDP growth of 1.5% in 2016 (a realistic forecast but not without risk according to the Haut Conseil des Finances Publiques). The deficit is also expected to fall from the level of 3.8% in 2015 to 3.3% in 2016, a reduction that would be almost entirely due to a decrease in the structural deficit, going from 1.7% in 2015 to 1.2% in 2016, in particular thanks to efforts made to contain expenditure. It should be noted that this reduction is being carried out at the same time as a significant cut in the tax burden, both for companies and households.1 Apart from this effort with the public accounts, the French government is also undertaking other reforms to boost its economy. Let us analyse the most important ones in more detail.

A considerable proportion of the agenda of reforms is related to helping French firms regain the competitiveness they had lost. To this end a tax credit has been introduced, as well as a reduction in Social Security contributions for companies, known as the Crédit d'impôt pour la compétitivité et l'emploi (CICE) and the Pacte de responsabilité et de solidarité, respectively. Both measures reduce the cost of the labour factor for firms. The Macron Act was also passed in 2015 to liberalise markets and boost activity, introducing measures in a range of areas, from extending shop opening times to Sundays and liberalising the coach service and various regulated professions, such as public notaries, to speeding up legal proceedings in employment tribunals and reducing dismissal costs for SMEs.

It has also recently been announced that the labour market will be reformed in the near future in order to make it more flexible, with the first draft planned for the beginning of 2016. This reform aims to simplify the employment legislation contained in the Code du travail,2 whose current version runs to almost 3,000 pages. It also aims to reform collective bargaining and bring this process to the level of companies, further establishing the temporary nature of agreements, in line with the guidelines of the Rapport Combrexelle. Although the draft has yet to be drawn up, the government has already established three red lines: there will be no modifications to the 35-hour working week, the minimum wage or employment contracts. Another notable reform aimed at making the French labour market more flexible is the creation of an individual account that would cover the rights of unemployment, training, etc. Its aim is to focus on protecting workers' rights instead of specific jobs to maintain the degree of protection enjoyed by workers at the same time as improving the labour market's ability to adapt to economic conditions.

The French government is introducing these initiatives with the aim to create a more flexible, competitive and enterprising economy. France's Economy Minister believes this is being accomplished, stating «the word entrepreneur, let us never forget, is a French word». Nevertheless, although the reforms announced are in the right direction there are too many red lines and there is still a lot of room for improvement. The government's leeway is limited given the extensive response of society with a busy electoral calendar. In any case, it is vital for France to energise its economy as soon as possible and for all those involved to put their shoulder to the wheel.

1. The Budget predicts that, in 2013, companies will save 13.5 billion euros with the Crédit d'impôt pour la compétitivité et l'emploi (CICE) and 18 billion with the Pacte de responsabilité et de solidarité. Households will also see a 5 billion euro reduction in income tax.

2. The Code du travail includes legislation for employment contracts, collective bargaining and other employment-related aspects such as health and safety, training, etc. 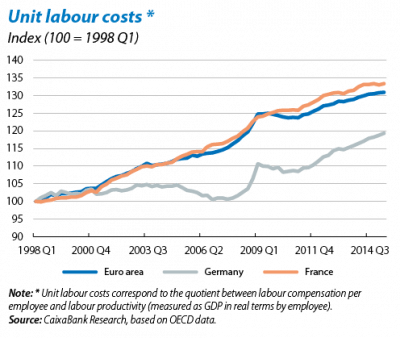 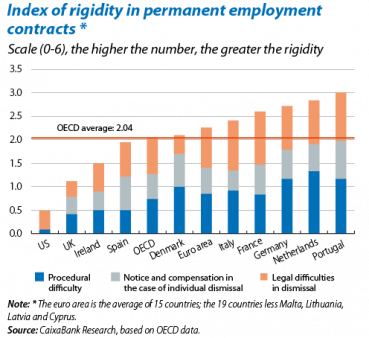