As countries' populations are becoming increasingly older, so more and more voices are warning of the need to carry out structural reforms to ensure public finances sustainability. An ageing population and consequent rise in dependency ratios could reduce tax revenue and increase public spending significantly. Hence, any measure that helps to contain this expenditure, such as policies to bolster public funds, are vital in ageing regions such as the EU. Nevertheless, there is still no consensus as to how to tackle one of the biggest challenges facing welfare states.

The ageing population affects public revenue by reducing it: this phenomenon, provided there are no changes in regulations or preferences, decreases the labour force and therefore the state's revenue capacity.1, 2 A new regulation increasing the legal retirement age, for example, could ease and even reverse this drop in revenue.3

On the other hand, and once again provided there are no changes in regulations or preferences, an older population also entails higher spending in three areas: pensions, healthcare and long-term care while there is less expenditure on education, which is concentrated into the first few years of a person's life. A priori this increase in spending appears to be significant. Nonetheless, estimating just how far ageing affects expenditure is no easy task since a range of factors all have an impact at the same time and can both increase and decrease expenditure, obscuring the true effect of ageing. For example, an ageing population is usually accompanied by a rise in per capita income. Since higher per capita income population requests more healthcare services (as these are a luxury good), it is difficult to quantify which part of the increased expenditure on healthcare is due to ageing and which is due to the population being wealthier.

An extensive study carried out recently by the European Commission on the effects of ageing on public expenditure suggests that in the long term this impact is limited.4 Specifically, for the EU average, the results indicate an age-related increase in spending of just 1.6 points of GDP in 2040 and 1.8 points of GDP in 2060 (24.6% of GDP of 2013), as can be seen in the graph. Most of this rise is due to greater expenditure on healthcare and dependency. On the other hand, spending on pensions, which accounts for almost 50% of all public expenditure, will hardly change in GDP terms over the next 45 years: from 11.3% of GDP in 2013 it will rise to 11.7% in 2040 and will then fall again to 11.1% in 2060. It is the same situation with spending on education. This scenario proposed by the European Commission is largely based on the assumption that the recently announced measures for pensions in EU countries will continue in the medium term, pushing up participation rates and significantly reducing expenditure per pensioner as most of these measures aim to improve pension sustainability. The sustainability factor approved in Spain, which comes into force in 2019 and links benefits per pensioner to the population's life expectancy so that a longer life expectancy reduces the amount of pension received, should help to reduce the negative demographic effect on pension expenditure in the medium term. The same situation will happen in Portugal, where the official retirement age and life expectancy have been linked (starting in 2015), according to which a longer life expectancy delays the official retirement age.

The rise in age-related spending on healthcare and long-time care up to 2060 follows a similar pattern: growing by 0.9 and 1.1 points of GDP, respectively. Unlike pensions, these last two areas do not assume regulatory changes that might reduce spending but do assume a pattern of health for people's additional years of life. Specifically, the population's health is expected to improve so that someone aged 67 in 2040 would be the equivalent, in terms of healthcare and dependency expenditure, to a person aged 64 in 2015, for example, and a person aged 70 in 2060. If this were not the case, spending on healthcare and especially long-term care would increase considerably. In line with the findings by the European Commission, a study produced by the OECD on the trend in public costs in healthcare and dependency concludes that non-demographic factors have the greatest effect on rising expenditure; specifically factors such as technological improvements, changes in income levels and institutional changes compared with demographic elements such as ageing.5

According to these two studies, the bulk of the evidence suggests we should not be too concerned about the sustainability of public expenditure within the current context of an ageing population. However, it comes as no surprise that, in June's Economic Bulletin, ECB analysts raised doubts regarding the European Commission's recent findings, given that the estimates used are so sensitive to the assumptions made. Just three years ago the Commission itself estimated an increase in age-related expenditure equivalent to 4.1 points of GDP between 2010 and 2060, a figure that more than doubles the one presented in its latest report, namely 1.8 points of GDP. This notable improvement in the findings comes from more favourable demographic assumptions that limit the increase in the dependency ratio and from more positive participation and employment rates (the latter two thanks partly to the impact of recent reforms passed by numerous countries although also because a better macroeconomic outlook is assumed for the region). In this respect, migratory flows, so much in the news due to the current crisis, could also significantly alter the calculations for the long-term sustainability of public accounts. In general, most immigrants who reach advanced countries do so at working age so that, if they join the labour market, they help to delay the impact of ageing and thereby the problem of sustainability.

It is therefore too early to conclude that ageing is not an important factor that might jeopardise public sustainability in the medium term. It might be more significant than assumed by the studies and its effects could start to be seen sooner than originally thought, particularly in those EU countries with a higher level of ageing, such as Germany. We should therefore do all we can to implement reforms aimed at increasing the efficiency of the public sector. Because, in the absence of more accurate estimates, it is better to be safe than sorry, as our elders would say.

1. Labour productivity is assumed to be constant; if not, the potential revenue could increase.

2. See the article «Is the impact of demographic transition inevitable?» in this Dossier for a more detailed discussion of the effects of ageing on GDP and GDP per capita and therefore, indirectly, on public revenue. 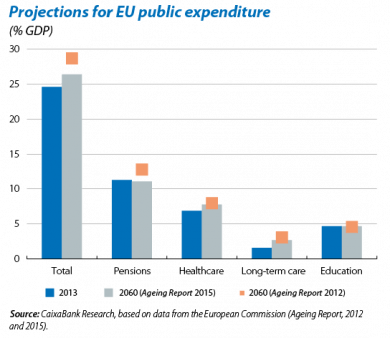