Internationalisation: an opportunity for employment

The export sector has been key to cushioning the drop in domestic demand. On average, its contribution to GDP growth was 1.8% between 2010 Q1 and 2013 Q2 and the bulk of the evidence suggests that it will play a decisive role in supporting the recovery in activity in the coming quarters. However, there are doubts regarding the extent of the positive effect it might have on the labour market.

An analysis of employment trends by sector according to their export intensity provides us with an initial clue. As can be observed in the first graph, in those sectors where the percentage of sales abroad is more than 25%, the  year-on-year rate of change in employment is, on average, positive. In those sectors with a lower share of sales abroad, however, on average jobs are still being lost.

The figures are therefore relatively encouraging. It should be noted that only one part of the labour market is being analysed, namely some industrial and service sectors, but these represent 43% of all employees. Moreover, those sectors with more than 25% of their sales abroad employ 20% of all workers.

In order to fine-tune our analysis of the capacity to create jobs of those sectors more exposed to foreign markets, we will analyse whether they are, in general, less work-intensive sectors than those sectors more oriented towards the domestic market. If this were the case, we might infer that they would be capable of generating fewer jobs than sectors with a more domestic focus. As can be seen in the second graph, this is not the case, as no systematic relationship is observed between the intensity of the labour factor for each sector and how open they are to foreign markets.

One last clue can be found if we estimate the elasticity of growth in employment related to growth in gross value added: this is not significantly higher in sectors more oriented towards the domestic market.(1) In short, it does not seem that the Spanish economy's greater internationalisation will hinder the recovery in employment. Quite the opposite.

(1) Specifically, the regression estimated is yit = a + b1 xit + b2 di + b3 xit*di+ eit, where xit is the annual growth in gross value added in real terms of sector i in the period t, yit is the annual change in employment in sector i in the period t, and di is a dichotomous variable equal to 1 for those sectors with a share of sales abroad higher than 25% of their total sales. Fictitious time variables are also included in the regression. To determine the robustness of the result, the regression is estimated for different limits of share of foreign sales and those sectors related to tourism are not included. In no case is the elasticity of employment to GVA growth higher in the more domestic-oriented sectors. 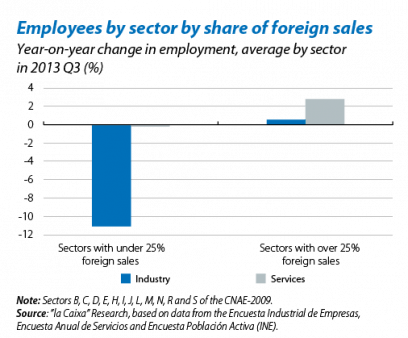 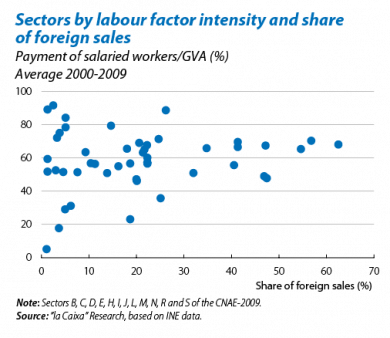 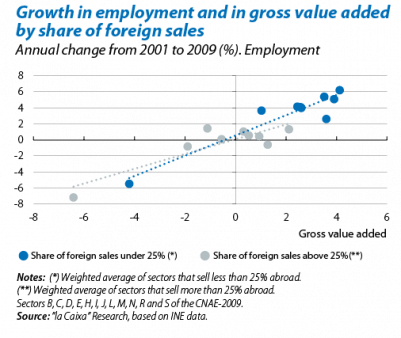