The markedly dual nature of Italy's labour market has meant that the economic crisis has resulted in significant losses of temporary jobs, in particular among the young. In 2014 Q3 the youth unemployment rate reached 42.8% (compared with 12.8% overall) and, for 2013 as a whole, precarious employment was such that 52.5% of contracts for young employees were temporary (compared with 13.2% overall). Given this situation, in December 2014 a labour reform was passed as part of a series of important measures (reform of the legal and tax system, of public administrations, etc.) promoted by the Prime Minister, Matteo Renzi, to boost the Italian economy. The Jobs Act, which will come into force throughout this year, will bring about a significant change in Italy's labour market. Below we analyse the main aspects of this reform.

One first element that should be noted are the changes in permanent employment contracts. Specifically, severance pay will be less costly and readmission in the case of unfair dismissal will be eliminated. With the new law, severance payments will increase in accordance with the length of time employed by the firm at a rate of 2 months per year worked, with a minimum of 4 months and a maximum of 24. Moreover, objective reasons for dismissal have been clarified, defining the reasons that would justify dismissal be they financial, due to demand or technological or organisational changes in the company. The new law also makes it possible for managers and workers to come to a settlement in the case of dismissal, another important step forward to boost the labour market and reduce uncertainty when hiring new workers. This compensation would cost even less but would also increase in line with the time employed by the firm (1 month per year worked, with a maximum of 18 months).

The second and most controversial change introduced by the labour reform is that employers, should they lose a case brought before an employment tribunal, are no longer obliged to re-admit the workers with permanent contracts they had dismissed, and can compensate them financially instead. Before the reform, workers had to be readmitted by the company, increasing managers' uncertainty and pushing up labour costs. However, readmission of workers has been maintained for cases of discrimination and fraudulent dismissal.

The changes introduced should significantly increase the incentive to give permanent contracts (which will also enjoy tax benefits during the first year) and could reduce, at least in part, the dual nature of Italy's labour market, particularly benefitting young people. The success of this reform will largely depend on it being implemented correctly and whether it manages to increase the speed and predictability of new employment contracts. Moreover, the Italian government plans to complete this reform with additional changes, such as a contract that will replace atypical temporary contracts to prevent these from being misused in jobs which, given their nature, should be permanent. It also aims to reduce the existing number of employment contracts. Another important task that will be carried out is the development of active employment policies, at present very few and not very effective. In any case, labour legislation alone will not be able to boost the Italian economy but must form part of an overall modernisation with transformations in the legal, tax and educational systems, among others. Italy therefore has a gigantic task ahead of it but it does look as if it is already getting down to work. 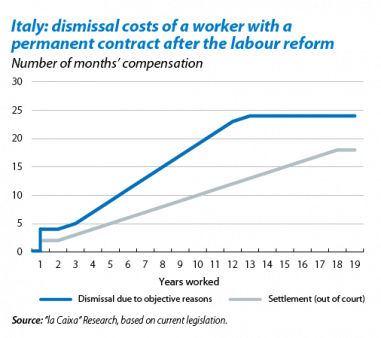