Recovery of employment and growth of the Portuguese economy

One of the main characteristics of the recent economic recovery in Portugal has been the surprising progress of the labour market. In fact, between 2014 and 2017, the number of jobs grew by more than 351,000, which represents an average annual growth of 1.9%, slightly higher than the average GDP growth of 1.8% in the same period. What are the main factors that are contributing to this change?

The relationship between GDP and employment: before and after the financial crisis

Between Q4 2013 (the period that marks the beginning of the recovery of economic activity and employment) and Q2 2018, employment increased by 9.2% and GDP by 8.3%. This reveals a considerable ratio of 1.1 jobs created for each new unit of GDP, substantially above that of the euro area in the same period (0.6). This value also contrasts with that observed in the past in the Portuguese economy, since between 1995 and 2008, the relationship between employment and GDP was 0.6 jobs per unit of GDP.

One of the explanations for this dynamism in the labour market is that the economy has managed to create jobs in net terms starting at lower GDP growth rates than prior to the international financial crisis. As can be seen in the first chart, the correlation between growth in employment and that of GDP (the so-called Okun curve) has become steeper since 2013, meaning that increases in the GDP growth rate are associated with a greater acceleration in the rate of job growth. The chart also highlights that the Portuguese economy is now able to create employment starting at a year-on-year GDP growth rate of 0.5%, a rate significantly lower than that of the period between 2002 and 2008, when it was 1.5%.

The stronger relationship between employment and GDP after the financial crisis coincides with the structural reforms introduced in the labour market, especially those implemented in the period 2011-2015. In this regard, the ECB has stressed that countries that implemented structural reforms, like Portugal, are now seeing how employment reacts more substantially to the recovery in GDP.1 In Portugal, the reforms implemented during this period were aimed at simplifying the legislation and they managed to increase the flexibility of the labour market, as shown by the Employment Protection Legislation (EPL) indicator developed by the OECD.2 More specifically, the OECD considers that the changes made to severance pay in this period3 may have provided a significant boost to the recent bout of job creation. The programmes introduced to support recruitment4 are also likely to have had a positive impact.

Nevertheless, it should be added that the rapid increase in employment in recent years is also a result of temporary factors. Specifically, the pressure on companies to cut costs during the recession forced many of them to reduce their workforce in excess, just in order to survive, a phenomenon that is reversing now that the recovery has become established. During the period 2008-2013, 630,000 jobs were destroyed (i.e. 12% of the positions that existed in 2008). This was partly a result of a rigid and dual labour market, and partly because the Portuguese corporate sector is made up of small businesses, which are less likely to survive a recession. The rigidity of the labour market, as well as the lack of mechanisms available to reduce the number of hours worked per employee5 during the financial crisis, exacerbated the loss of jobs. In addition, the reduced protection for temporary workers (compared to those with a permanent contract) and the high market duality6 fostered a reduction in the number of employed people through their contracts not being renewed.

The sectoral composition is also important

However, the construction and industrial sectors have also made a major contribution to job growth, since they experienced significant job creation following the destruction of jobs observed during the recession. As an example, in the construction sector one in every two jobs were destroyed, while in industry the figure was one in every five. In cumulative terms, between Q1 2014 and Q2 2018, employment increased by 13.3% in the construction sector and by 14.9% in industry. This was following cumulative reductions of 45.8% and 18.5% during the recession (2008-2013), respectively.

What will be the relationship between employment and GDP in the future?

The shift of the economy towards the tertiary sector (greater role of services in the productive structure), together with a less rigid labour market, will continue to foster a stronger relationship between employment and GDP in the future. As we have seen, according to the Okun curve, the economy is now able to create jobs at lower GDP growth rates than before, which allows individuals to benefit from the recovery in economic activity more quickly.

The other side of the coin of the strong rate of job creation is the slower growth in labour productivity. Even if part of the strong employment creation is the result of temporary factors –suggesting that labour productivity growth might recover in the coming years–, there are reasons to believe that this recovery will be limited. In particular, the low educational attainment of a significant fraction of the Portuguese workforce remains an important factor. In fact, in 2017, Portugal was the EU country with the highest percentage of workers with an education level below secondary education.7 Increasing human capital remains one of the major challenges in order to boost productivity.

3. Severance pay for dismissal in permanent contracts was reduced from 30 days’ wages per year worked down to 12 days, and the minimum level of compensation to which workers were entitled was eliminated. The new rules apply to new employment contracts.

4. Such as the Employment Contract, a form of financial support to help companies hire unemployed people who are registered in the job centres.

6. In the first half of 2018, temporary contracts accounted for 19% of total employment, a percentage similar to that of 2008. 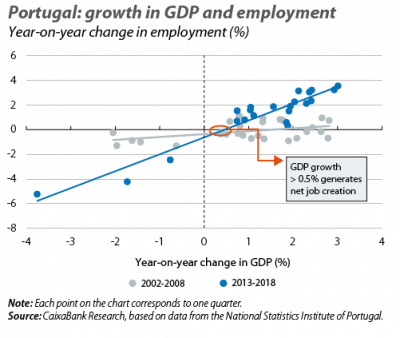 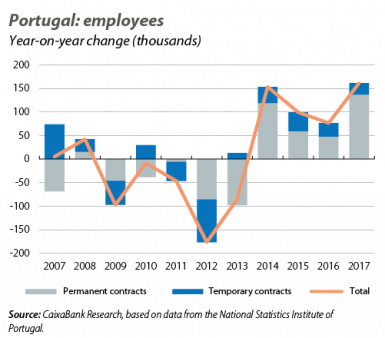 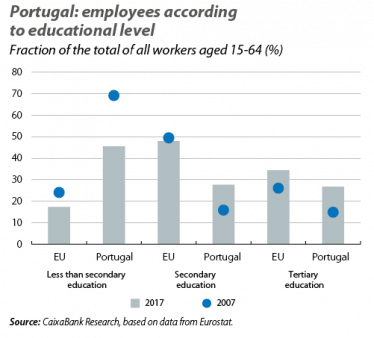