The reduction in the US labour force: retired or discouraged?

The recovery in the US labour market after the last big crisis is turning out to be a long, tortuous process. Many have raised doubts regarding its flexibility, which had been praised formerly. Between January 2008 and March 2010, close to 9 million jobs were lost and the unemployment rate shot up from 5.0% to 9.9%, a level that had not been reached since the recession early in the 1980s. In the last four years, the unemployment rate has slowly improved, falling to 6.7% last February, a figure close to the target (6.5%) set by the Federal Reserve (Fed) at the end of 2012 in order to start its normalisation of reference interest rates. However, an examination of other vital signs for the labour market shows that this improved unemployment rate exaggerates the positive nature of the diagnosis. So much so that, at its last meeting, the Fed's Open Market Committee withdrew the numerical target of 6.5% from its monetary forward guidance. The room left for the labour market to improve is a crucial variable to gauge whether the expansionary monetary measures run the risk of causing problems of overheating.1 If this margin is considerable, the recipe of low interest rates for a prolonged period of time announced by the Fed should not be any cause for concern. But if there is little room for improvement, the upward pressure on wages will be a serious threat.

A more detailed analysis of the unemployment rate (the ratio between the unemployed population and the labour force, understood as those who are employed or actively seeking employment) shows that the good news of its reduction has been overshadowed by the fact that this is largely due to a shrinking labour force and not because the unemployed have found work. In particular, the participation rate (the ratio between the labour force and the population aged over 16) has gone from 66.4% before the crisis to 63.0%, an unprecedented decrease among the rest of the developed countries over the same period. Given the size and importance of this phenomenon, many studies have attempted to explain it and make forecasts.2

Broadly speaking, the participation rate is determined by three groups of elements. First, demographic factors, mainly the proportion of adults out of the total population. Second, socio-economic preferences such as the inclusion of women in labour market, which led to the upward trend in the rate as from the 1960s. And third, cyclical factors (compared with the previous, more structural factors), in particular the discouragement effect that occurs when economic conditions are so adverse some people decide to stop looking for work (and the opposite when there are cyclical improvements in economic activity).

Demographics appear to have played a significant role in the recent reduction in the labour force. Specifically, the ageing of the US baby boomers (those born 1946 and 1964) should have been pushing the participation rate down since 2000, when the first wave of baby boomers started to approach retirement age. However, there is notable disparity in results from empirical studies regarding the demographic factor's degree of relevance: while analysts from the Philadelphia Federal Reserve estimate that the retirement of baby boomers lies behind a surprising 66% of the decrease in the participation rate, those from the Chicago Federal Reserve calculate that this is only responsible for a modest 25%.3 One aspect that supports the theory that demographics are only moderately responsible is the fact that the participation rate has also fallen substantially since 2000 in the group of adults aged between 25 and 54 (prime-age workers), precisely the group with the highest participation rates among the population as a whole.

Consequently, other factors apart from an ageing population are also important in explaining this drop in the participation rate. The most noteworthy of these is the discouragement caused by the harshness of the recession among those unemployed people who, after months of fruitless searching, have thrown in the towel and consequently no longer form part of the labour force, simultaneously lowering both the participation rate and unemployment. In this respect, during the current crisis the percentage of long-term unemployed out of all those without work has reached an all-time high in the US labour market (45%). And although this share has now fallen to 37%, the drop can be attributed, once again and to a great extent, to the discouraged people in this group.

The large number of discouraged potential workers requires us to look at other measures of the underutilisation of employment apart from the unemployment rate if we want to know the real state of the labour market. Among these, one series published monthly by the Bureau of Labor Statistics includes, in addition to the unemployed, those discouraged people who have stopped actively looking for work and those who are forced to work part-time due to
the current situation but who would like to work full-time. Looking at the first graph, we can immediately notice a much weaker improvement in employment than the one suggested by the unemployment rate alone.

Regarding the discouraged, and although we can expect many of them to return to the ranks of the labour force as the economy recovers, of concern is how capable these people really are of working again after such a long period of inactivity. This would suggest that one factor we initially thought to be cyclical actually has a more permanent component. This contingency is known as «risk of hysteresis» and, together with the demographic factor, could have reduced the growth potential of the US economy in the medium-term.

In addition to discouragement, the harshness of the recession has also affected the labour force by forcing young people to join the labour market later. This phenomenon is particularly visible in the high number of women who have decided to prolong their studies or to start a family at an earlier age. As with discouraged workers, this delay is mainly a cyclical factor with secondary structural aspects. However, on this occasion the structural component could have a positive effect on potential growth insofar as the labour force will be better trained in the future.

Another element that has received particular attention from the specialist media is the extraordinary increase in the number of applications for disability pension. Whichever way you look at it, this figure is higher than the ageing population seems to warrant. Such an increase is due to the fact that those unemployed with some kind of partial disability, having used up all their unemployment benefit entitlement, have decided to try their luck via disability benefit with the hope of receiving some kind of compensation to help them survive. Although this is surely a much less relevant factor than those mentioned previously, its structural nature warrants some consideration as those people whose disability is unlikely to be accepted will return to work once the economic cycle improves.

Lastly, together with the USA's internal factors, globalisation has also helped to lower the participation rate. Between 2000 and 2007, the severe blow for workers in the manufacturing sector as a result of China joining the World Trade Organization was offset by a prosperous real estate sector which was able to absorb a large proportion of workers laid off from industry, mostly in low-skilled jobs. However, the bursting of the real estate bubble, which set off the Great Recession, broke this bridge between jobs.4 We are familiar with the rest of the story: these workers, most of them low-skilled, have stopped actively looking for work as they have become discouraged.

In short, empirical studies point to both structural and cyclical factors (i.e. discouragement) behind the fall in the participation rate. However, the precise extent of each of these is still a matter of controversy. A controversy that can be seen not only among the Fed's analysts but also among those at the top of the institution, including members of the Monetary Policy Committee. Hence, among others reasons, the disparity of opinion regarding whether the rate of monetary normalisation should be fast or slow. So far, the Fed has opted for the second option but it would be advised to watch for signs that might indicate a smaller margin of improvement in the labour market than estimated, such as the rate of wage rises.

1. By margin of improvement in the labour market we mean the margin regarding idle resources.

2. This article uses the concept of «participation rate», as used by the Bureau of Labor Statistics. Note that this rate is often also calculated as the ratio between the labour force and the population aged between 16 and 64. 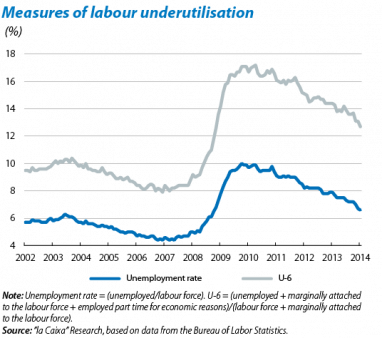 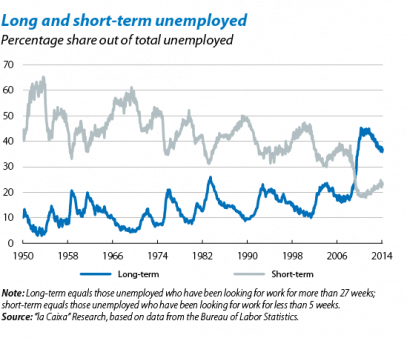