Wage trends and labour underutilisation in the Spanish labour market

One of the key determinants of wage dynamics throughout the economic cycle is how close the labour market is to saturation. This tends to be gauged using the unemployment rate. A large number of unemployed indicates there is slack for companies to increase production and hire more workers without pressurising wages. As an economy enters the mature phase of the economic cycle and unemployment falls, pressure tends to increase on wages because companies find it more difficult to attract new workers.1

As can be seen in the first chart, Spain’s unemployment rate has fallen significantly since the peak reached in 2013 (a cumulative drop of 9.5 pp), now standing 6.8 pp above its pre-crisis level. Although it is still relatively high, should this rate of descent continue, it might soon reach levels at which, historically, wage growth has increased.

However, in the current stage of the recovery, the unemployment rate is not the best indication of labour market saturation. This is because there has been a considerable increase in the number of part-time workers who would like to work more hours and the degree of saturation is therefore smaller than suggested by the unemployment rate. A more accurate picture of labour market saturation is provided by the labour underutilisation rate, which includes both the number of unemployed and also involuntary part-time workers.

Although the labour underutilisation rate has also fallen considerably in the past few years, it is still 10.3 pp higher than its pre-crisis level. In fact, the percentage of the labour force that is currently involuntarily part-time (7% in Q3 2017, representing 58% of part-time workers) has hardly fallen since the recovery began in 2013. An analysis of the relationship between labour underutilisation and wage growth (the modified Phillips curve) suggests that, given the high underutilisation rate, wage growth for the economy as a whole is still relatively subdued.

But are there significant differences between sectors? The third chart shows that this situation differs radically depending on the sector. In hotels and restaurants, recreational and administrative activities, and also in construction, both the unemployment and the underutilisation rate are still relatively high.2 On the other hand, some sectors have a relatively low unemployment rate but high involuntary part-time employment (education, healthcare and other services). At the other end of the scale we find sectors with low rates of both unemployment and labour underutilisation. Consequently, although wage growth is expected to remain relatively subdued in general, we are likely to see notable differences between sectors.

1. The negative correlation between the unemployment rate and wage growth is known as the Phillips curve.

2. Sector-level unemployment takes into account the economic sector in which the worker was last employed, if they have worked during the past year. The long-term unemployed are therefore excluded, accounting for almost 50% of the total. 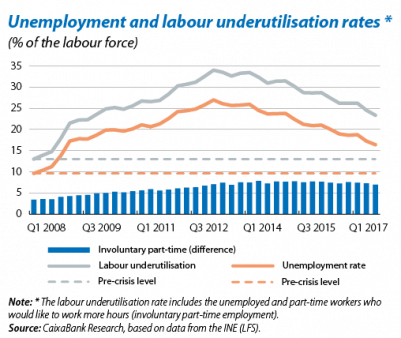 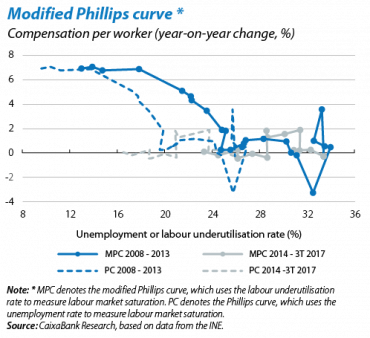 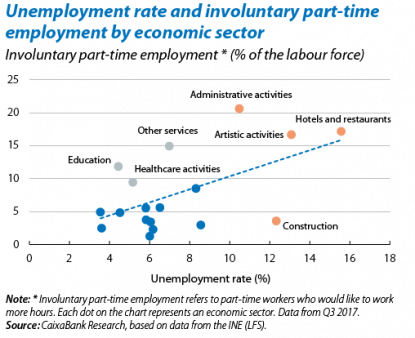