What the recruitment data hides

In 2018, 22.3 million employment contracts were signed in Spain. This is a record number which marks a sixth year of sustained increases, as well as a significant increase over the 17.8 million contracts signed in 2007. Despite the fact that 21% more contracts were signed compared to before the financial crisis, the number of people registered with Social Security stood at 19 million at the end of last year, a level very similar to that of 2007 (19.4 million). What is the reason for this contrast?

The other, less positive side of the story is temporary hiring.2 The number of temporary contracts signed in 2018 (20 million) is 22% higher than in 2007, yet the total number of contracted days is 22% lower. This is due to the continued increase of very short-term contracts. In particular, 28% of contracts signed last year had a duration of one week or less, and almost 40%, one month or less. In both cases, this represents a proportion that is 12 pps higher than in 2007. At the same time, there was a reduction in the proportion of both temporary contracts with a duration of more than one month and those without any end date, most of which correspond to temporary contracts for carrying out construction works or specific services, as well as to interim contracts. The result has been a marked reduction in the duration of temporary contracts (from 79 days on average in 2007 to 52 in 2018) and an increase in employment turnover. In addition, young people and low-skilled workers are the most likely to string together such very short-term contracts, which are usually combined with episodes of unemployment or inactivity.

Surprisingly, the use of very short-term contracts has increased in almost all sectors (see second chart). Their incidence is greater in more seasonal sectors, such as artistic activities and catering, but even in a sector such as industry, where employment is traditionally more stable, contracts of less than a week accounted for 32% of all the contracts signed in 2018 (in 2007, they only represented 4%). This marked increase in the number of very short-term contracts has not been reflected in the labour force survey (LFS) data, indicating that the time aggregation bias existent in the LFS.3 This would explain why the standard ratio of temporary employment, which has risen from 23.4% in 2012 to 26.8% according to the LFS data, has failed to capture all of the increase registered in short-term employment.4

It should be noted that the increased use of short-term contracts is not linked to the economic crisis. Their use has been increasing steadily for more than two decades and is related to the fragmentation of production into more limited tasks, a trend that has been facilitated by structural factors such as the reduction of transport costs and technological change.5,6 For example, increasingly small and medium-sized companies are participating in global value chains and must adapt their production
to a demand that is variable over time, but they need a flexible labour structure in order to do so. In this regard, technological change also makes it easier to adjust recruitment policies in order to match the duration of employment relations with the company’s specific employment needs at any given time. Therefore, in a way, these contracts increasingly resemble the «employment on demand» of the gig economy, which matches the supply and demand for employment in real time.7

Adapting recruitment to better suit companies’ staffing needs can also boost their competitiveness.8 However, a distinction should be made between the real need for a short-term position that matches a temporary need in the productive process and an unwarranted use of such contracts, given the negative externalities that are associated with them. The worker runs the risk of being trapped in a cycle of very short-term contracts, continuously switching between employment, unemployment and inactivity, which has consequences for both income and social security coverage. In addition, with regards to productivity, an excessive use of these short-term contracts can be counterproductive for both the worker and the company in the medium term, since they are unlikely to invest in training and human capital. Furthermore, excessive workforce turnover can be negative for the public finances as it reduces the social security contributions that are collected and increases the costs of unemployment benefits.

Preventing the inappropriate use of short-term contracts for longer-term employment relations is no easy task. A frequently-used approach is to increase the costs of these contracts, although this has not always had the desired effect. This approach has already been applied since 2001, as the Social Security charge for common contingencies of contracts lasting less than a week is 36% higher than it is for other contracts,9 and in December 2018 the Government increased this differential up to 40% for contracts of
five days or less. In France, where a similar measure was implemented, Pierre Cahuc and his co-authors10 show that the increase in social contributions for these contracts actually reduced their average duration. This is the opposite of the desired effect, because the higher contributions raised labour costs and ended up reducing the aggregate demand for employment. In light of this, it seems that a more effective course of action would be to focus on preventing the unwarranted use of short-term contracts. It would also be worthwhile analysing whether differences in redundancy payments between different types of contracts could be influencing the use of short-term contracts. The ultimate aim of all this, of course, is to achieve a fairer labour market with less duality.

1. The recruitment data provide a record of employment relationships that were created, and a single worker can string together multiple such relationships in a given year. The Social Security registration data correspond to the number of workers who hold an employment contract at a particular time.

2. Reducing the high rate of temporary contracts is one of the main challenges facing the labour market in Spain, given its negative impact in many areas, including productivity. See the Focus «How does the type of employment contract affect productivity?» in the MR03/2016.

4. This type of bias is common in labour force surveys, which, by asking about a person’s employment status in the week in question, fail to capture jobs they have had outside that period.

5. See the Dossier «Inclusive growth: creating opportunities for all» in the MR01/2019 for a detailed analysis of how these factors are affecting economic growth.

6. OCDE (2017), «How technology and globalisation are transforming the labor market», OECD Employment Outlook 2017.

9. Act 12/2001 of 9 July, on urgent measures for labour market reform to increase employment and improve its quality. 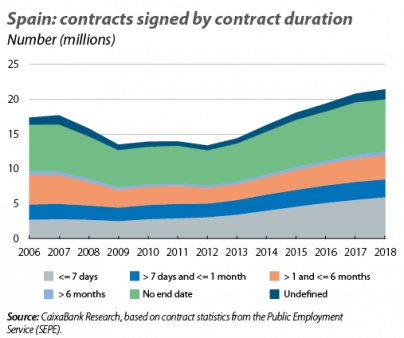 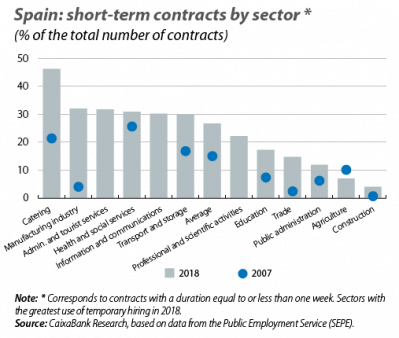