Growth in housing prices is starting to reach high levels in some markets. Taking 2014 Q1 as our benchmark, significant increases can be seen in the nominal price of housing in the US (11.0% year-on-year), United Kingdom (7.9%), Ireland (7.8%) and New Zealand (7.2%). These rises are even more substantial if we only take into account the trend in prices in certain towns and cities. For the year to date, year-on-year growth in housing prices was well into double figures in both London and Dublin. Similarly, the value of property in Germany's large cities has grown three times faster than the rate for the country as a whole (7.3% and 2.4% year-on-year, respectively), the former seeing cumulative growth of 42% over the last five years.

Given this situation, there are fears that, should the current environment of extremely lax monetary conditions go on for much longer (in other words, interest rates at an all-time low, limited volatility and ample liquidity worldwide), this might lead to property prices overheating. It should be noted that a large proportion of the imbalances created in the sector in the last decade have been attributed to the low real interest rates recorded at the beginning of the same decade. Considering the impact on the economy and financial sector of the bursting of the real estate bubble, it comes as no surprise that the rapid growth in housing prices observed recently has aroused misgivings.

To determine whether such arguments are enough to confirm the formation of imbalances in housing prices in developed countries, we will use the simile of a physics principle, according to which the position of a body at a future point in time cannot be determined solely through the speed at which it is currently moving; we also need to know its current position. Returning to real estate, if the growth in prices is equivalent to speed, we need some kind of reference to determine the current position of real estate prices in terms of their equilibrium level. An increasingly widespread indicator used for this purpose is the relation between a country's housing prices and household income. Consequently, should housing prices greatly and extensively exceed the rise in household income, this could suggest that the former are above their equilibrium level. According to OECD data, this would be the case of, among others, countries such as Belgium, New Zealand and Canada where, judging by this index, housing prices would be overvalued by more than 30%.

Using this indicator, we can classify different countries according to the degree of overheating observed in their real estate sectors. To this end, we have related the extent of imbalance in housing prices (i.e. the current position) with the change recorded in 2013 (the speed). Without doubt, the countries more likely to experience an overheated property market are those in which the overvaluation of housing prices has continued to increase in the last year (top right quadrant). This group would be made up of Canada, New Zealand, Australia and the United Kingdom, among others. Less alarming, however, is the case of countries such as France, Italy, the Netherlands or Spain where, although housing prices are somewhat overvalued, this is gradually being corrected (bottom right quadrant). The US, Germany and Ireland head the third group of countries (top left quadrant) where the rise in housing prices is bringing them close to their equilibrium level. This suggests that the growth observed recently in the US and Irish property markets is due, to a certain extent, to their recovery after an excessive price adjustment over the last few years and is not the result of another real estate bubble forming. And, lastly, the bottom left quadrant contains those countries whose housing prices are falling even though they are already at a relatively low level.

The above diagram shows that, according to our classification, in 2013 only 6 of the 24 countries analysed showed signs of overheated housing prices. This is a very different picture from 2005, when the number of countries was much higher, namely 14. Given this situation, should measures be taken to reduce the overheating of housing prices observed in some countries? And, if so, what should these measures be?

Regarding the first question, the experience of the recent real estate crisis seems to have tilted opinion in favour of early intervention to reduce any negative effects of overheating in the property market. One initial option might be to raise interest rates since higher financing costs act as a brake both on the demand and supply of real estate and ultimately help to cool down housing prices.1 However, given that signs of overheating are often geographically localised, this does not seem to be the ideal solution: removing any monetary stimulus would affect economic activity as a whole and would be counterproductive, particularly in those economies that are still fully immersed in their recovery.

More precise and direct alternatives should therefore be found to cool down localised booms in housing prices, such as macroprudential management tools (see the article «Macroprudential tools, the great unknown» in this Dossier). Among the range of measures available, recent studies have shown that those limiting household demand for credit, by relating the loan granted either to their income or to the value of the property (the Loan-to-Value or LTV ratio), are the most effective in controlling growth in real estate credit. This reduces any potential risks in the financial system due to the property market overheating and, in turn, cools down rising real estate prices.2

Other measures that can also have a localised effect on housing prices are of a fiscal nature. According to a recent article by the European Commission, a large number of European countries provide substantial incentives to acquire housing (such as tax deductions on mortgages).3 Over the last few years there have been notable reforms to reduce such incentives in several peripheral European countries, although the political cost of such measures generally limits their implementation.

In short, the recovery in the property market does not seem to be showing any widespread overheating of housing prices in developed countries, although some locations have been detected where the temperature is rising fast. For the moment, macroprudential and fiscal policies are enough to remedy such localised imbalances without having to resort to tightening up monetary measures which are still needed to support the incipient economic recovery.

1. Although a large amount of literature has proved this negative relation between property prices and interest rates, there are substantial differences in estimates of its extent. For more information, see Kuttner, K. «Low interest rates and Housing Bubbles: Still no Smoking Gun».

2. For more information, see Kuttner and Shim «Taming the Real Estate Beast: The Effects of Monetary and Macroprudential Policies on Housing Prices and Credit». 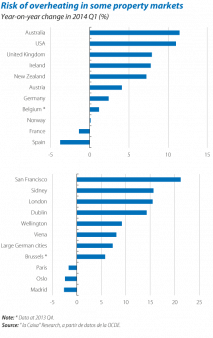 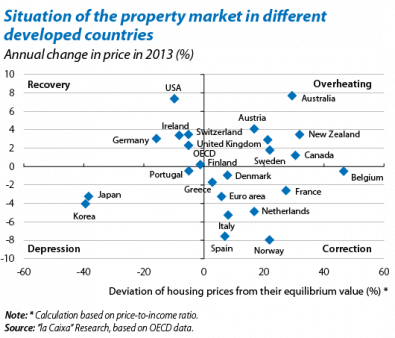