The ECB finds itself in an alley with just one exit: QE

In September 2014, Mario Draghi gave a surprise announcement that the ECB's balance sheet would be expanded by one trillion euros through the purchase of asset-backed securities and covered bonds and also by granting long-term credit at a very low interest rate with the condition that loans be given to the non-financial sector (known as targeted long-term refinancing operations or TLTROs), a commitment confirmed at its December meeting when the expansion of the balance sheet was classed as «intention» rather than «expectation». The impact of such announcements was immediate, with a significant drop in yields both on public and corporate debt as well as well in interbank interest rates.

With the three programmes underway for a few months now, we can begin to analyse just how effective they have been. Unfortunately the conclusion is not very encouraging: the bulk of the evidence available suggests that the ECB will find it very difficult to increase its balance sheet to the level indicated via the measures announced to date. In the first two TLTROs held, the total amount demanded was 212 billion euros, far below the maximum available, namely 400 billion, and also below what analysts expected overall. Similarly, although the rate of covered bond purchases is higher than in previous programmes of a similar nature (see the corresponding graph), the scope of this last programme seems   limited. Moreover, 210 billion euros are still pending repayment, corresponding to the LTROs held in December 2011 and February 2012, which will drain liquidity.

Apart from growing doubts regarding the effectiveness of the measures being carried out, the uncertain macroeconomic situation of the euro area is also pressurising the ECB. Specifically, beyond the speed at which the euro area is recovering, which was already expected to be very slow, of particular note is the change occurring in inflation  expectations. A change that is unlikely to reverse over the coming months, with inflation probably entering negative terrain. Although to a large extent this drop is due to falling oil prices and not to any further decline in domestic demand, fears of deflation will once again plague the euro area.

Given this scenario, and given the repeated statements of several members of the ECB's Governing Council, such as Coeure and Praet, opening the door more or less explicitly to the announcement of a sovereign debt purchase programme, the ECB seems almost bound to make a move in this direction at its coming meetings. If it finally implements a quantitative easing (QE) programme, it will more than likely opt for a sovereign debt purchase programme of around 500 billion euros which might last about one year. This new measure, together with the operations already underway, would be enough to increase the size of the ECB's balance sheet as announced. In addition, the ECB has also opened the door to buying up corporate bonds.

Naturally, a programme of such characteristics would push interest rates to a slightly lower level than at present,  helping to consolidate the recovery in credit, but the impact would surely be greatest on the exchange rate, with the euro possibly going below 1.20 dollars. However, at this stage in the game the biggest shock for growth prospects is not the announcement that QE will start, which the market has largely already supposed, but the possibility of the ECB not announcing it after all.

Given the inability of any other EU institution to revive growth, the ECB has become almost the only credible reference. If it disappoints the expectations aroused, the negative effect on household and investor confidence could be another blow to the still fragile recovery. It therefore appears that the ECB has entered an alley with just one exit: QE. 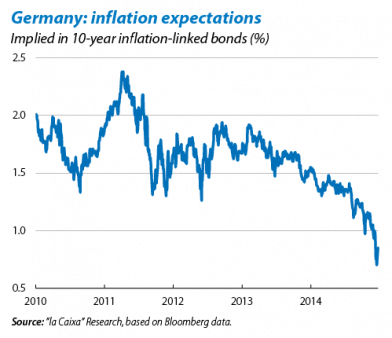 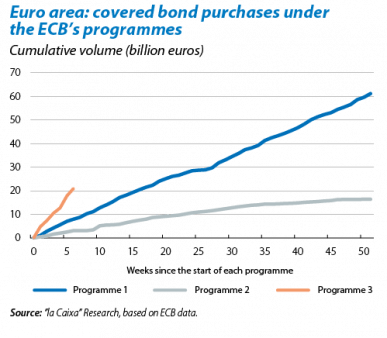