One of the best-known mantras during J.C. Trichet's presidency of the European Central Bank (ECB) was that the institution would never commit itself: «we never pre-commit», he repeated, again and again. But times have changed. The current President, Mario Draghi, has moved significantly away from this approach, incorporating an additional tool into monetary management: «forward guidance». And there are good reasons for this.

The ECB's main (conventional) monetary policy tool lies in its handling of official interest rates: raising them, maintaining them or lowering them. Such control over very short-term rates allows it to affect, via expectations, the medium and long-term rates and therefore influence economic growth and inflation. However, in the euro area's current context, with official interest rates already close to zero, there is very limited margin to introduce more stimuli through this tool. Observing that the central bank's meetings merely issue yet another decision to «maintain interest rates» could lead agents to form expectations regarding the monetary authority's intentions that differ from what the institution might desire. As far as we know, back in May the Governing Council of the ECB realised that agents' expectations regarding the future path of monetary policy were moving away from what it believed to be the right path. Consequently, the Governing Council decided to make use of «forward guidance». This tool allows it to communicate to the public the path the institution aims to take in terms of interest rates, with the degree of specificity it deems appropriate. This was announced on 4 July by including, in its monetary policy communication, the phrase «the Governing Council expects the key ECB interest rates to remain at present or lower levels for an extended period of time». With this, the institution aims to clarify its view of the economic situation and reaffirm its commitment to an expansionary monetary strategy, precisely at a time when market interest rates are under pressure to rise, generated by the US Federal Reserve (Fed).

On realising why the ECB has introduced forward guidance, the question immediately arises as to whether this has been effective and credible. It is true that only a short time has passed but, on analysing the evolution of forward EONIA rates, we can see the measure has indeed had the desired effect. In other words, agents' expectations regarding future interest rates have shifted downwards, even though the forward guidance has been relatively vague. In fact, although this initial impact is as intended, the ECB, just like the Fed in August 2011, might need to stipulate the date on which it expects to start raising interest rates. In other words, to specify the end of this «extended period of time». The benefit of this is that some of the uncertainty surrounding qualitative guidance is eliminated, making it easier to anchor market interest rates at the desired level. The cost is that, if the central bank then acts differently, its credibility might suffer lasting damage. Moreover, as the economy gradually enters the expansionary phase of the cycle, investors will inevitably ask a more detailed question: what must happen at a macroeconomic level for the ECB to believe it is the right time to shift towards a less expansionary policy? When this kind of doubt spreads, and in order to achieve appropriate clarity in guidance, the central bank might associate the evolution of monetary strategy with the performance of economic variables consistent with its targets. The Fed and the Bank of England, both of which come under a twofold mandate that requires them to maintain price stability and also boost growth, have already taken this step, announcing which levels or thresholds of unemployment and inflation will mark the start of interest rate hikes. Unlike its Anglo-Saxon peers, the ECB has a single statutory mandate: price stability. This gives it less room to manoeuvre in the area of «forward guidance» as it would be controversial to refer to variables such as the unemployment rate. Consequently, it is not easy for the ECB to adopt more precise guidance by using thresholds of economic variables and, if it did so, these would refer, in principle, to inflation or inflationary expectations. 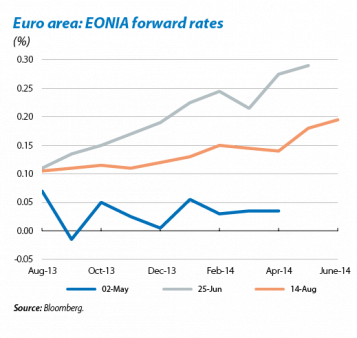