A federal funds rate hike: this time is different

Last 17 October the US Federal Reserve (Fed) made it very clear that it is extremely likely to raise the federal funds rate at its next meeting on 16 December. Given the imminence of the start of monetary normalisation, two issues have now come very much to the fore: how fast and how much the rate will rise over the coming years. Looking back at upward cycles in the past could provide us with some clues but we must remember that today's context is different and highly idiosyncratic.

Since the mid-1950s, the fed funds rate has undergone 12 upward phases. During these upward cycles the rate has typically risen over a period of more than two years on average and with an increase of almost 5 pps. If we calculate a «speed index» for monetary normalisation by dividing the rise in the interest rate by the duration of the upward cycle, the average speed would be 2.4 pps per year. However, this historical average is biased upwards since it includes the 1980s and 1990s when there was substantial monetary adjustment and when the Fed transformed how it implemented monetary policy. So, if we focus on the last four cycles, the federal funds rate rose, on average, by slightly more than 3 pps in under two years, bringing our speed index closer to 1.7 pps per year.

The upward path in the federal funds rate is expected to take, as forecast by members of the Fed's Monetary Policy Committee, suggests it will normalise even more slowly at a rate of 0.9 pps per year (see the graphs). This projection may seem highly conservative but there are several factors that suggest the rate of increase should be particularly gradual on this occasion. Firstly, the US macroeconomic situation means the Fed must act with caution: unlike the situation at the start of the adjustments mid-1990s and 2000s, today inflation and inflation expectations are still below the 2% target and, in spite of the economic recovery over the last few years, observed GDP is still below the estimate for potential GDP. On the other hand, taking into account the fact that the ECB is considering an even more flexible stance, excessive divergence between the monetary policies on both sides of the Atlantic could push the dollar up too high.

Moreover, the current situation of some of the main emerging economies does not only allow but even encourages the Fed to take its time with its monetary normalisation. In particular, fast adjustment in US interest rates could result in episodes of financial instability in those emerging countries with more vulnerable macroeconomic and financial situation, such as Brazil.

Lastly, we should also remember that, on this occasion, the Fed has another instrument apart from the federal funds rate to influence interest rates: the active management of its balance sheet. Should the Fed deem it necessary, it could sell off some of the bonds acquired over the last few years. Should the other tools fail which the monetary institution has at its disposal (see the Focus «US monetary normalisation: the Fed's new toolbox» in MR07/2015), this more aggressive strategy would make interest rate hikes effective in all parts of the curve.

In short, the factors that usually influence the Fed's decision are, this time, at levels that suggest that the most appropriate normalisation strategy required at present is more gradual than on other occasions. This is also being confirmed by the market whose implied expectations point to a somewhat more cautious approach than the one indicated by the Fed's members. 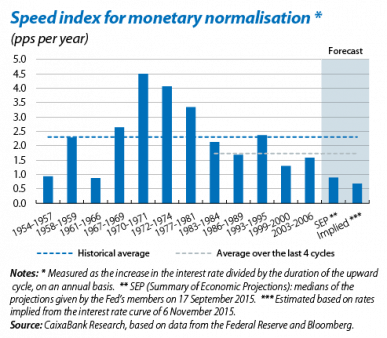 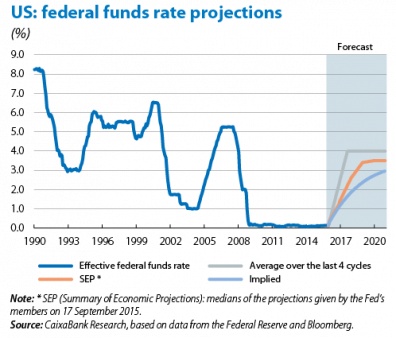