The monetary policy that needs to be carried out by the main developed countries continues to generate intense and interesting debate. In the US and United Kingdom, GDP growth is above 2% and people are now opening discussing the right time to start raising interest rates. In the euro area, for months now the liquidity injected over the last few years has been gradually drained off but weak growth and low levels of inflation are pressurising the ECB to continue measures to underpin the recovery. Although the monetary policy tools that have been used in the last few years are, in many cases, new, the underlying debate has not changed. On the one hand there are fears that toughening up monetary policy too soon could derail the recovery and, on the other, that prolonging easy monetary conditions too long could create new bubbles in certain real or financial assets.

The extraordinary situation over the last few years forced central banks to take innovative measures without being able to rely on the support of widely accepted theories. In such a situation, which is quite disconcerting up to a point, it would be very useful to have benchmarks that can be used to defend a measure. And this is precisely the aim of the Riksbank, Sweden's central bank, whose actions have aroused fierce debate. The point of disagreement: the consequences for the Swedish economy of the interest rate hikes carried out by the Riksbank between June 2010 and July 2011. According to Economics Nobel Prize winner, Paul Krugman, this action has led Sweden to deflation and is therefore a sign of what might happen if the ECB or the Fed rush in to toughening up monetary policy. Let us analyse this in a little more detail.

Sweden's economy, like those of the main developed countries, also suffered from the global crisis in 2009. The Riksbank, whose mandate is to maintain inflation at around 2%, responded by lowering the official interest rate to 0.50% and keeping it at this level until June 2010. At that time, the Swedish economy had exited the recession two quarters earlier and the consensus of analysts placed its rate of growth in 2011 at 2.6% and inflation at 2.1%. Given this situation, the Riksbank decided to start raising the interest rate, a trend it maintained until July 2011 when it carried out the last hike and left it at 2.00%.

Between June 2010 and June 2011, growth and inflation prospects for 2011 increased considerably, reaching 4.4% and 3.1%, respectively. Bearing in mind the fact that the effect of an interest rate hike on GDP growth or inflation usually takes about three quarters to materialise, it seems strange that, after the interest rate hikes carried out by the Riksbank, growth prospects increased rather than falling. In fact, it was not until the summer of 2011 when they started to fall. That was precisely the moment when the euro area fell back into recession due to the worsening of the sovereign debt crisis. A crisis which also affected Sweden (exports of goods and services account for 50% of its GDP, and exports of goods to the euro area account for 40% of the total).

It is therefore true that the Riksbank's decision to raise interest rates in June 2010 is debatable. For this debate, in addition to the aforementioned arguments we should also consider other aspects such as financial stability and the economy's idle capacity. But it is not obvious that the action taken by the Riksbank was the reason for the Swedish economy's relapse and its current deflation. 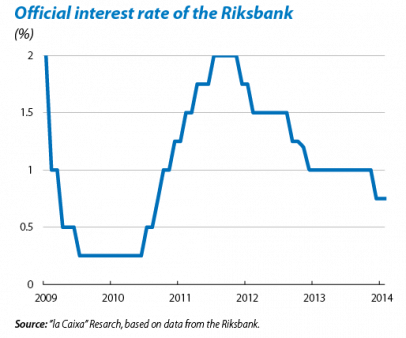 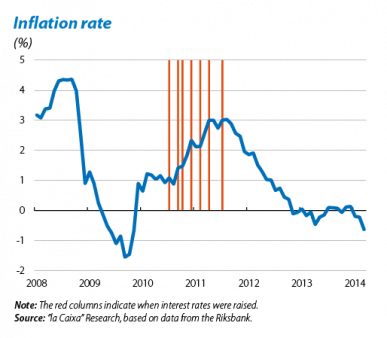