Should monetary policy react to the financial cycle? Some reflections and possible answers

To what extent should monetary policy react to the financial cycle, or lean against the wind, as it is known? This question has given rise to heated debates between leading economists and it will also be present in the discussions around the strategic reviews currently being carried out by the major central banks. The dilemma is well known: if monetary policy reacts to the financial cycle in an attempt to dampen it and smooth financial fluctuations, it affects economic activity and inflation.

A recent article by the prestigious economists Gourio, Kashyap and Sim1 has helped to give credibility to the theses in favour of taking the financial cycle into consideration. In their research, the authors show that most analyses on optimal monetary policy did not take into account the potentially very high impact that financial crises can have on GDP. They also ignore the fact that monetary policy is a powerful tool for mitigating the negative impact of the financial cycle in times of crisis. In particular, in economies where a bad allocation of credit can generate financial shocks, the authors demonstrate that significant welfare gains in society can be generated by incorporating the financial cycle into monetary policy. In particular, a monetary policy that anticipates the coming crisis when there is a financial boom and raises interest rates allows the likelihood of a severe financial crisis occurring to be reduced (by preventing potential financial bubbles), as well as preventing less productive companies from capturing a large part of the credit and limiting risk appetite. These gains are especially important if the economic losses generated by a financial crisis are high.

In our chart, we show what the reference interest rate for the euro area would be on the basis of a Taylor rule, amended to take the financial cycle into consideration. Specifically, like Juselius and co-authors in their original article, we allow the reference interest rate to react not only to fluctuations in the output gap and inflation, but also to changes in the debt service gap, that is, to the deviation relative to the historical average of the ratio of interest payments by households and firms in relation to their income. The intuition is that a low level of interest payments encourages households and firms to take on more debt, which ends up affecting their economy’s GDP and the macrofinancial conditions. It therefore makes sense to include it in the monetary policy rule.2 We call the interest rate which takes the financial cycle into account the «interest rate with an augmented Taylor rule», and we compare it with the shadow rate and the rate derived from a traditional Taylor rule. The shadow rate is simply the refi rate that we would observe if it were not anchored to 0%, that is, if it reflected the ECB’s unconventional measures such as quantitative easing (QE).3

The results leave no room for doubt: in the booming years of the 2000s, the interest rate with an augmented Taylor rule was significantly higher than both the shadow rate and the rate according to a traditional Taylor rule. This is because these were years of financial boom, in which the debt service gap was in negative territory (i.e. interest payments were modest), which encouraged indebtedness and thus generated an overheating of the economy. This boom should have led monetary policy to set higher interest rates in order to cool the financial cycle. In fact, setting higher rates could have helped to reduce asset prices and thus contain the leverage and excessive risk appetite of those years.

During the crisis period, in contrast, factoring in the financial cycle would enable better measurement of the economy’s weakness, which helps to understand why somewhat lower rates than those prescribed by the Taylor rule may be more appropriate. Finally, in recent years, incorporating the financial cycle into the Taylor rule would lead to reference rates that are higher than the shadow rate. Therefore, according to what the shadow rate indicates, it appears that, in reality, rates have been too accommodative. Indeed, with an output gap that has been closing and a small recovery in credit after successfully completing the deleveraging process following the crisis, it is no wonder that incorporating the financial cycle prescribes higher rates and that, in fact, they would have already started to rise.

Ultimately, failing to take the financial cycle into account results in lower rates than would be desirable in times of economic expansion, which ends up accelerating the onset of the coming crisis and exacerbating its effects. Such effects forces central banks to implement aggressive rate cuts. The lesson here is that excessively low rates in the present also generates low rates in the future, creating a vicious circle. In contrast, taking account of the financial cycle and not allowing ourselves to be blinded by the (apparent) blessings of boom periods is key (in combination with the appropriate macroprudential policies) for ensuring a more balanced management of monetary policy.

3. For further details on shadow rates and the methodology used by Wu and Xia to calculate them, see the Focus «Discovering monetary policy in the shadow» in the MR02/2016. 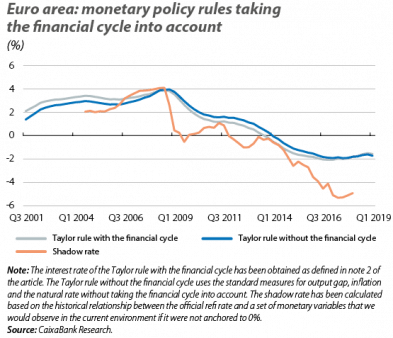