Which emerging central banks will have to follow in the Fed’s footsteps?

With two hikes in just three months, the normalisation of the official interest rate of the US Federal Reserve (Fed) appears to be firmly on track. The crucial question is now whether emerging central banks will tend to mimic the decisions taken by the US central bank due to the implications these might have for emerging financial assets and for these countries’ economies in general. But not all emerging countries are bound to follow the Fed down the path of normalisation.

After the various crises suffered in the 1980s and 90s, several emerging countries decided to carry out structural reforms aimed at making them less vulnerable to external shocks. Adopting a floating exchange rate was one of the key measures implemented from the end of the 1990s in many countries.

Emerging countries that want to boost their foreign trade can find a pegged exchange rate very useful as it reduces exchange rate uncertainty, making these countries more attractive for international investors. However, in order to maintain a fixed exchange rate, usually pegged with the dollar, central banks were forced to follow the course taken by the Fed, in some cases leading them to implement monetary conditions that were not entirely appropriate for their own economies.

Now, after many emerging countries have liberalised their exchange rates, there should be less pressure to follow the Fed. But several countries still tend to replicate US monetary policy. This pattern of behaviour can be seen in many of the countries with a current account deficit. They are more dependent on inflows of foreign capital and, consequently, although they may have a floating exchange rate, their respective central banks have gradually raised interest rates over the past few years to prevent any sharp depreciation in their currencies and ensure they can still attract international investors.

According to a study by the Federal Reserve Bank of Dallas,1 this kind of action is particularly prevalent in emerging countries receiving debt-based net inflows of capital over the past few years. On the other hand, this is not the case of those countries whose capital inflows have focused on other kinds of investment, such as foreign direct investment. The reason: investment in debt, be it sovereign or corporate, is much more liquid and therefore much more sensitive to changes in investor sentiment. Foreign direct investment, however, tends to be made with an eye on the longer term.

We can therefore expect the central banks of countries such as Turkey, Russia and South Africa to raise their interest rates over the coming quarters as they have received significant amounts of debt investment in the past few years. 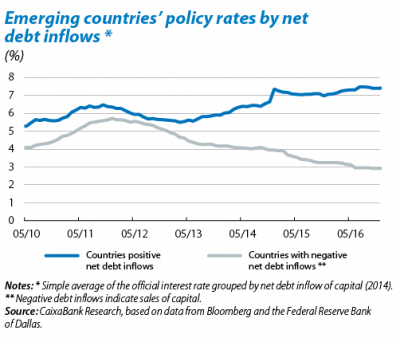 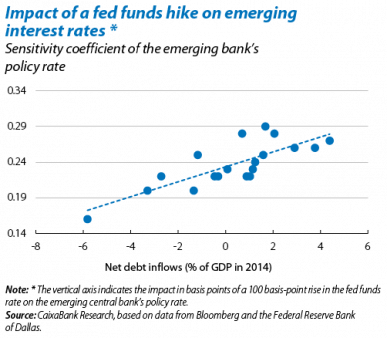