According to the Congressional Budget Office (CBO), the federal deficit will shrink more quickly than expected. After the positive trend of the last few months, spurred on by the end of exemptions regarding payroll tax and some transfer of income from 2013 to 2012 on the part of higher income households, the Congressional Budget Office estimates that federal revenue will increase by 15% in 2013,(1) up to 17.5% of GDP. For its part, outlay would fall by 2.3% to 21.5% of GDP, reflecting the automatic adjustment resulting from the famous sequester. This improvement on both flanks, which would continue in 2014, would help to shrink the federal deficit from 7.0% of GDP in 2012 to 4.0% in 2013, coming close to 3.4% in 2014. In the short term, this prospect of correction is welcome. Not only because it indicates that fiscal consolidation is making headway but also because it relieves tensions regarding the debt ceiling, extending the deadline from August to October. Nonetheless, this does not resolve the problem of the sustainability of US federal debt in the long term.

Should current policies continue, the CBO projects that revenue will continue to increase, approaching 19% of GDP by 2023 thanks to the end of deductions for depreciation and the gradual improvement in the tax base of wages and earnings due to the improved economy. However, the correction in federal spending, excluding interest payments, stops at a relatively contained 19.4% of GDP by 2023 (21.3% in 2012). From this point on, affected by the ageing of baby boomers and their impact on Medicare (medical and healthcare for those over 65), it would rise to 26.1% of GDP in 2037 and 32.6% in 2087. The projected improvement in revenue would therefore not be enough to offset rising outlays, taking federal debt to an alarming 200% of GDP by 2037.

There is a solution but it requires drawing up a long-term sustainability plan and coming to an agreement about whether spending should be cut, taxes increased or something halfway between. Cutting benefits is complicated. However, there is room to improve healthcare efficiency (the USA spends 17.4% on public and private healthcare when the OECD average is 9.6%). There is also room for tax hikes (especially on consumption and green taxation): in 2010, taxes accounted for 25% of GDP compared with 36.1% in Germany and 34.9% in the United Kingdom. On the other hand, eliminating the complicated system of deductions would introduce simplicity and increase revenue without the need for tax hikes. The solution therefore lies in the corridors of Congress.

(1) All the years refer to the «tax year» which, in the USA, goes from September to September. 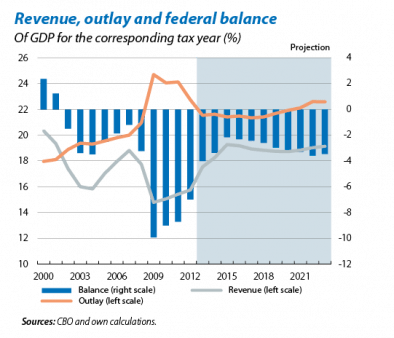 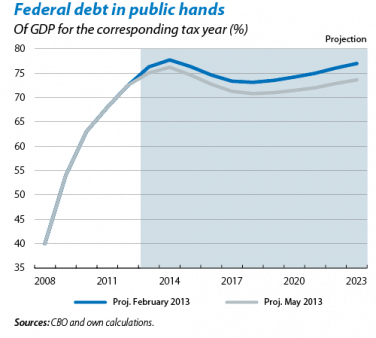 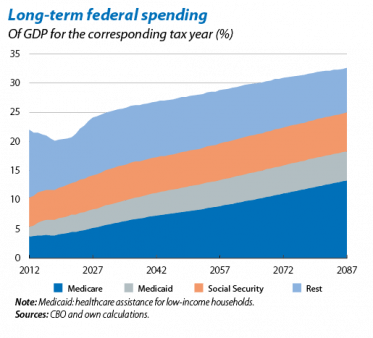