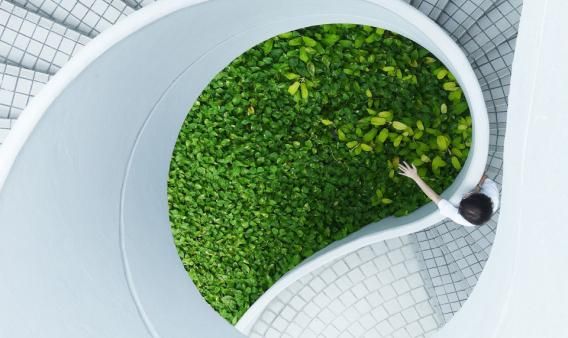 The fight against COVID-19 has two major points in common with the fight against climate change. Firstly, although a pandemic can spread in a matter of weeks while climate change worsens much more gradually, both have the ability to evolve exponentially: in the former case through social contagion mechanisms and in the latter case through polluting emissions accumulated over time. Secondly, once the phenomenon has been identified and the necessary measures are taken to curb it, the costs become apparent immediately, whereas the benefits take a while to become visible.

In a famous speech in 2015, the governor of the Bank of England, Mark Carney, referred to climate change as the «tragedy of the horizon»,1 noting that, as a collective problem that surpasses the traditional horizons of the economic and political cycle, current generations do not have the right incentives to combat it, even having access to all the available information on the devastating effects it will have in the future. Is it possible that, by highlighting the risks of inaction to address adverse events, the COVID-19 pandemic will help to accelerate the fight against climate change?

Of course, while COVID-19 is having devastating consequences for health and the economy on a global scale, the mobility restrictions imposed to curb the pandemic have reduced emissions across the world. In this article, we will discuss how much of a short-term impact the COVID-19 pandemic has had on polluting emissions and to what extent this is a lasting shift. Finally, we will present different future scenarios for the trend in polluting emissions.

The immediate effect of the COVID-19 pandemic: a temporary and insignificant reduction in emissions

The COVID-19 pandemic has forced millions of people around the world into lockdown and has led to the closure of schools, factories, shops, hotels and airports, with a drastic reduction in the mobility of the entire population. It is no wonder, then, that this pandemic has also reduced the levels of polluting emissions.

Although there is not yet any emissions data available for 2020, studies have been carried out that estimate how they have changed by sector in real time, based on mobility and economic activity data.2 The Carbon Monitor project, for example, allows us to obtain estimates of daily carbon dioxide emissions (which represent 80% of all polluting emissions) in the energy, industrial, residential, land and air transportation sectors, based on data on electricity generation, production, mobility and fuel consumption, among others. As the first chart shows, the most drastic declines in emissions occurred in the first weeks of April, with global levels plummeting by 17.0% year-on-year in the second week. At the end of April, at a time when around half of the world’s population was in lockdown, cumulative global emissions had fallen by 8% compared to the same period in 2019. The decline was considerable, but it was quickly undone: by the end of September this cumulative drop had already been limited to 6% year-on-year with the gradual normalisation of economic and social activity, and by the end of November it had fallen even further, to 5%, despite the new restrictions imposed to curb the second wave of the pandemic.3 Beyond this dynamic observed in global emissions, there was a significant rebound in emissions in the energy and industrial sectors, which are responsible for 70% of total emissions, registering a cumulative reduction of 3% up until the end of November, in contrast with the cumulative decline of 7% up until the end of April. 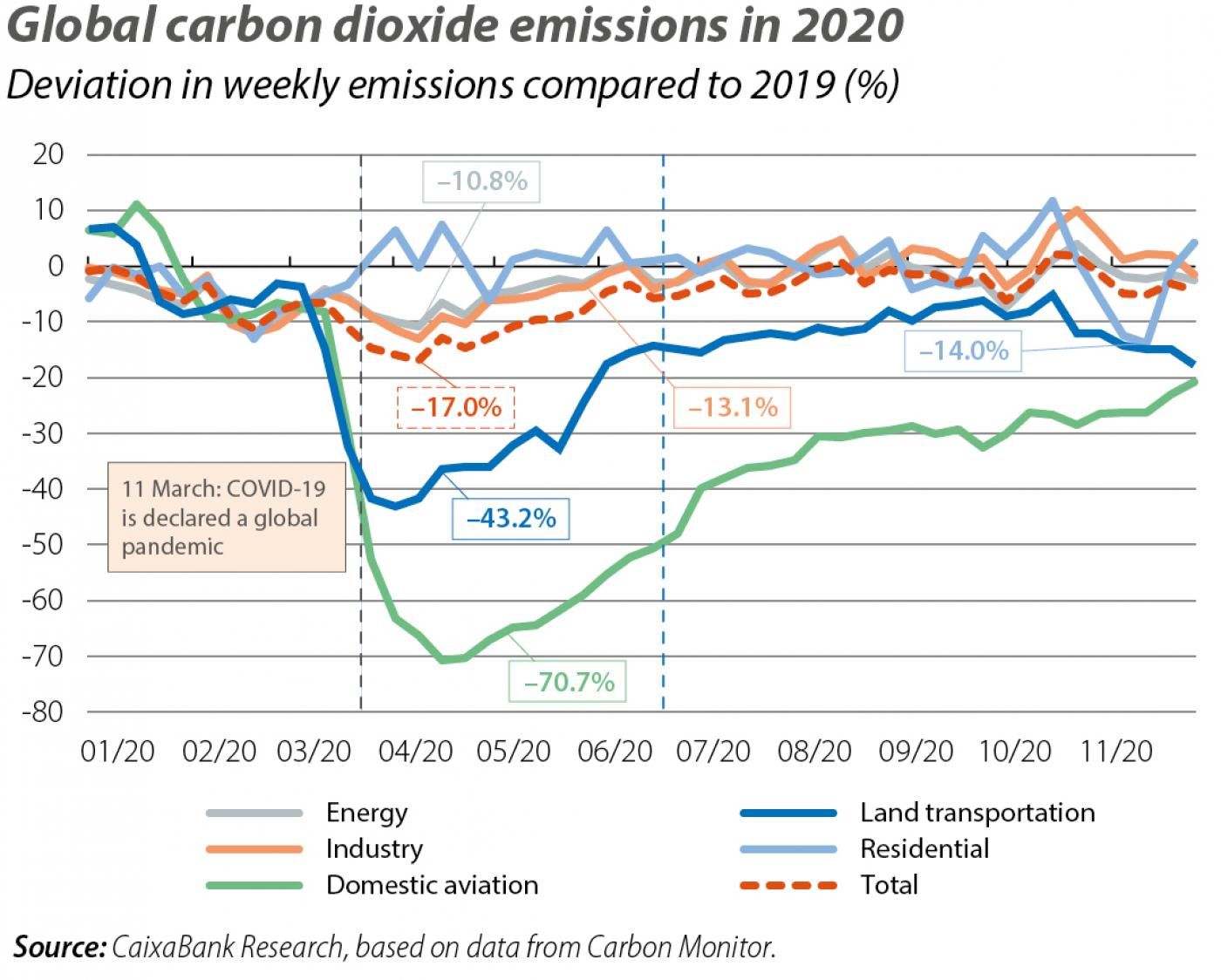 Thus, we are talking about a temporary reduction in emissions in an exceptionally adverse context marked by a very high economic and human cost.4 In addition, it should be clarified that the effect of this temporary reduction will be small relative to the colossal challenge that climate change poses for our society. Indeed, while the Carbon Monitor estimates presented indicate a reduction in global polluting emissions of between 5% and 6% in 2020,5 which would represent the biggest decline since World War II, it is estimated that the average temperature of the planet will cool as a result of this drop by only 0.01 degrees Celsius between now and 2030 relative to the counterfactual scenario without the pandemic.6 Therefore, it is clear that only an economic recovery with a strong green imprint driven by ambitious measures to combat climate change, combined with the development of new technologies for capturing and absorbing polluting gases, can ensure we are in a position to meet the targets laid down in the Paris Agreement and limit global warming to 2°C above pre-industrial levels. 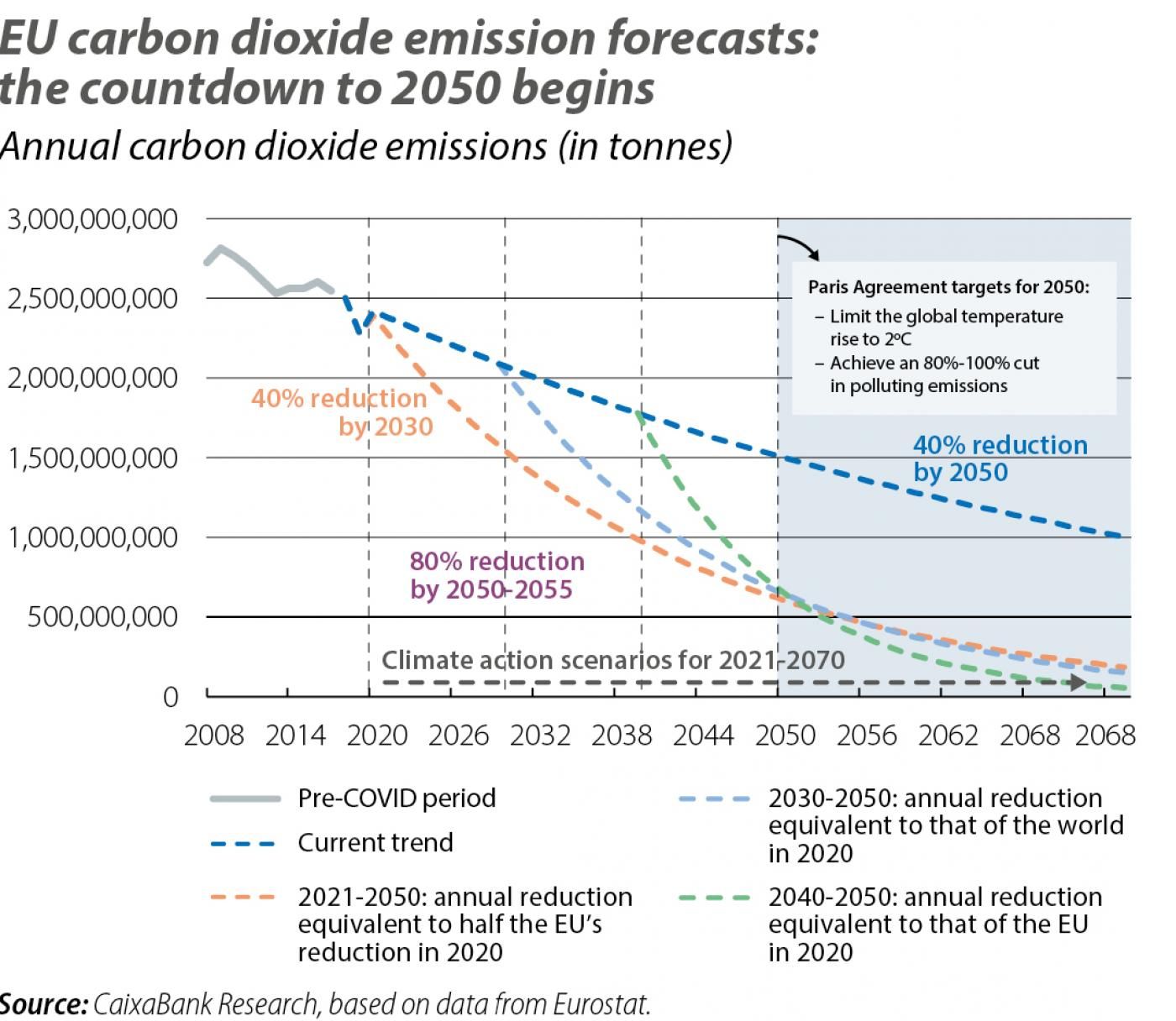 From COVID-19 to the long-term evolution of emissions: the ship has to change course

The magnitude of the structural change needed in our productive model to address global warming over the coming decades is evident. In order to achieve the targets of the Paris Agreement, the EU has clearly defined the various battle grounds for cutting greenhouse gas emissions by between 80% and 100% by 2050 compared to 1990 levels.

How can we achieve this end goal? Taking into account pre-pandemic emissions data, estimates of the drop in emissions in 2020 (around –9% in the EU according to estimates by the Carbon Monitor) and the targets for reducing emissions by 2050, we have developed different scenarios for the potential evolution of carbon dioxide emissions in the EU over the coming decades. In the first scenario, from 2021 countries would maintain the trend observed between 2008 and 2018, with an average decline of 1.6% per year across the EU as a whole. In this case, by 2050 the EU would have reduced its emissions by just over 40% compared to 2018, well below the recently announced targets of a 55% cut in emissions by 2030 and zero net emissions by 2050.7 By tripling efforts and reaching a scenario in which emissions are reduced by 4.5% a year, the EU would achieve an 80% reduction between 2050 and 2055, with reductions of 40% as early as the mid-2030s.8 This would be a fairly significant sustained rate of decline in emissions, approximately equivalent to maintaining an annual reduction of half that seen in 2020 in the EU. To illustrate this pedagogically, it would be a reduction similar to that achieved with a two-month lockdown followed by a gradual return to normal spread over a period of six weeks (Le Quéré et al., 2020).

On the other hand, if the post-pandemic recovery were to postpone Europe’s efforts to cut emissions, or if investments within the framework of NGEU failed to have the anticipated effects, the scenario would be different. Thus, maintaining the current trend until 2030, between 2030 and 2050 annual emission cuts equivalent to those observed globally this year (between 5% and 6%) would be necessary in order to achieve a reduction of 80% by around 2050.

Finally, postponing climate action until 2040 would be very detrimental for the planet,9 and would also result in draconian reductions of 9% per year being required between 2040 and 2050 in order to achieve the aforementioned 80% reduction by around 2050. This rate of reduction would be similar to sustaining the levels of reduction observed in the EU in 2020, during a pandemic, for 10 consecutive years. Obviously, such a reduction in emissions would be almost impossible to sustain without inflicting enormous damage on the economy.

Ultimately, the scale of the climate challenge underscores the need to start taking ambitious action as soon as possible. The pandemic also reminds us that reducing polluting emissions cannot be done at the cost of a drastic reduction in economic activity. The smart thing to do, in order to meet the targets set, is to promote a green recovery that can revive the economy through cleaner, more sustainable technologies.