Calm continues to permeate the markets

The financial markets continue to perform healthily. During the month of February, investor sentiment continued the improvement shown in January and the markets exhibited a positive tone. This trend was once again supported both by the flow of positive news regarding the trade negotiations between the US and China and by the more cautious tone of the communications of the major central banks, particularly the pause in interest rate hikes announced by the Fed. Thus, market prices continued to recover from the peak of uncertainty experienced at the end of 2018, which saw a spike in financial volatility and widespread losses in the stock markets. In February, volatility in the financial markets remained moderate and the main stock market indices ended a new month with gains. All in all, a tone of caution towards the extent of the global economic slowdown prevails. As a result, low sovereign interest rates persist in the fixed-income markets and, according to market prices, investor’s expectations are that the Fed’s tightening cycle has already come to an end. On this note, the Fed’s update of its macroeconomic forecasts at its meeting in March will be key, given that they will indicate whether its members still expect further rate rises in 2019 (the latest forecasts indicated a median expectation of two further hikes).

The central banks show patience in the presence of downside risks for global growth. On the one hand, in the minutes of its last meeting, the ECB stressed the intensification of downside risks for the economic outlook, resulting from the moderation in the economic activity data and the financial turbulence experienced at the end of 2018. While members of the ECB still consider part of the slowdown in economic activity in the euro area to be temporary and the likelihood of recession to be low (an outlook we broadly share here at CaixaBank Research), the meeting minutes highlighted the high degree of uncertainty surrounding the persistence of that weakness and its impact on the medium-term outlook. For this reason, the ECB reiterated its intention to keep financial conditions accommodative in order to support the recovery of inflation. It also stressed the need for a complete assessment of the macroeconomic scenario of the euro area in the updated forecasts it will present at its next meeting on 7 March. On the other hand, at its biannual appearance before the US Congress, the chairman of the Fed, Jerome Powell, explained that the pause in interest rate hikes announced in January is a response to the conjunction of three factors: the spike in financial volatility at the end of 2018, a lower chance of upward surprises in inflation and the slowdown in the global economy. All in all, Powell did not rule out further changes to the official rates in the future and pointed out that they will depend on how the economic and financial data progress. In this regard, the minutes of the Fed’s January meeting showed that there is some disparity of opinions among its members. Some stressed that, in the absence of positive surprises in the economy, they would not wish to increase interest rates. Others argued that if the slowdown in economic activity in the US is moderate, as it is expected to be, they would like to implement new rate rises towards the end of 2019.

Sovereign rates remain low. Backed by the messages of patience from the central banks, in February the fixed-income markets were dominated by the stability of sovereign interest rates, which remained low. In the US, the yield on the 10-year bond fluctuated in a narrow band of 20 bps, ending up at around 2.70%. In the euro area, meanwhile, the yield on the German bund remained at very low levels, even falling below 0.10% (a low not seen since late 2016). In the periphery of the euro area, the risk premiums of Portugal and Spain declined slightly, while in Italy the risk premium was more volatile. Here, after a surge of around 40 bps at the beginning of the month, Fitch’s maintenance of the country’s rating (BBB, with a negative outlook) helped to spur a certain recovery in the differential.

The main international stock markets continue to register gains. The positive tone in investor sentiment observed since January continued in February, resulting in a moderation of volatility in the stock markets of the advanced economies and an increase in capital flows into equities. Both the US S&P 500 (also favoured by relatively better business profits in Q4 2018 than those expected by analysts) and the main indices of the euro area achieved monthly gains of around 3%. In the emerging economies, on the other hand, there was differing performance between regions. While the Asian indices clearly benefited from the favourable news about the trade negotiations between the US and China (specifically, the Shanghai stock market climbed by a spectacular 14% in the month as a whole), the back-and-forth sway of economic news and policies in Latin America led to modest declines on the region’s main trading floors.

The euro stabilises and oil prices rise. In the currency markets, the aforementioned stability of sovereign interest rates helped the euro to remain at around 1.13 dollars, while the British pound appreciated up to 1.17 euros (levels not seen since May 2017) in light of the various developments on the Brexit front (see the International Economy section). The price of a barrel of Brent oil, meanwhile, continued its rise that started at the beginning of the year, supported by the production cuts agreed by OPEC and its partners in December, reaching over 67 dollars. 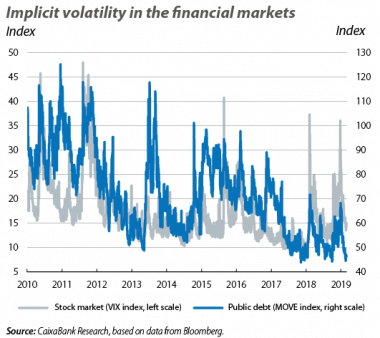 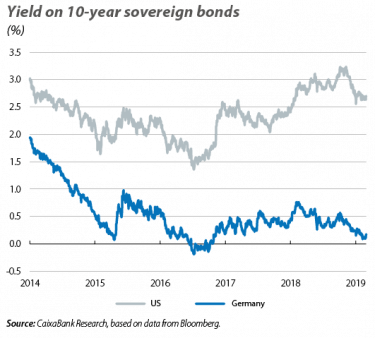 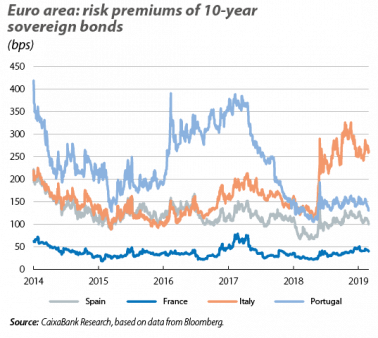 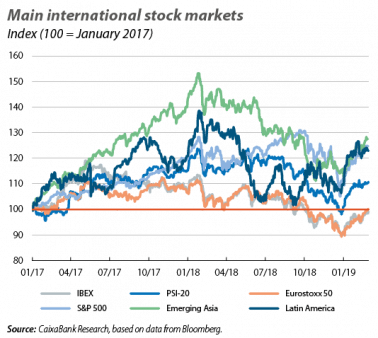 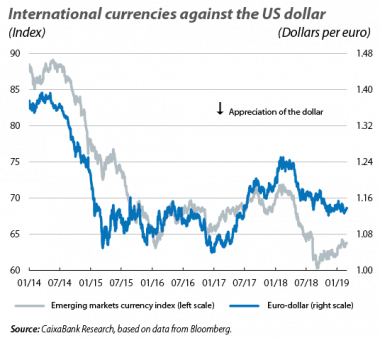