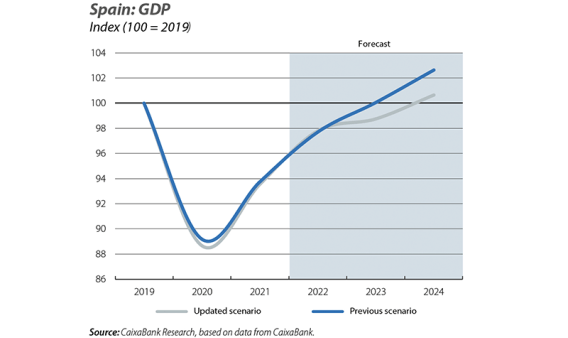 Downward revision of the 2023 growth forecasts

The economic environment remains dominated by the energy crisis that erupted in the wake of Russia’s invasion of Ukraine. This crisis deepened in the second half of August after Russia successively cut off gas supplies via the Nord Stream 1 pipeline, eventually leading to a total cut-off in early September. Whereas our forecast scenario in July was based on a TTF benchmark gas price of around €90/MWh for 2023 on average, throughout September the futures market fluctuated at around €200/MWh, more than double what was expected just two months ago. Also, in the face of the sharp rise in gas prices, the ECB has signalled its intention to ratchet up the pace of its interest rate hikes in response to the inflation rally. Spain is better placed than other major European economies to deal with the energy crisis: we are much less dependent on Russian gas than economies such as Germany or Italy (9% of our gas imports in 2021 came from Russia, compared to 65% in Germany and 43% in Italy in 2020) and our capacity to convert liquefied natural gas back into natural gas gives us greater ability to diversify gas imports. As a result, we are very unlikely to see episodes of gas rationing here in Spain, despite the cut-off of Russian gas supplies to northern Europe. That said, our economy is not immune to higher gas prices or sharper interest rate hikes. These dynamics lead us to revise our forecast scenarios. In the current context, we expect GDP growth to remain at around 0% in the closing stages of this year and in early 2023. For 2023 as a whole, we have revised our GDP growth forecast down from 2.4% to 1.0%. We have also revised our inflation forecast up to 4.5% for the 2023 average (previously 2.6%). 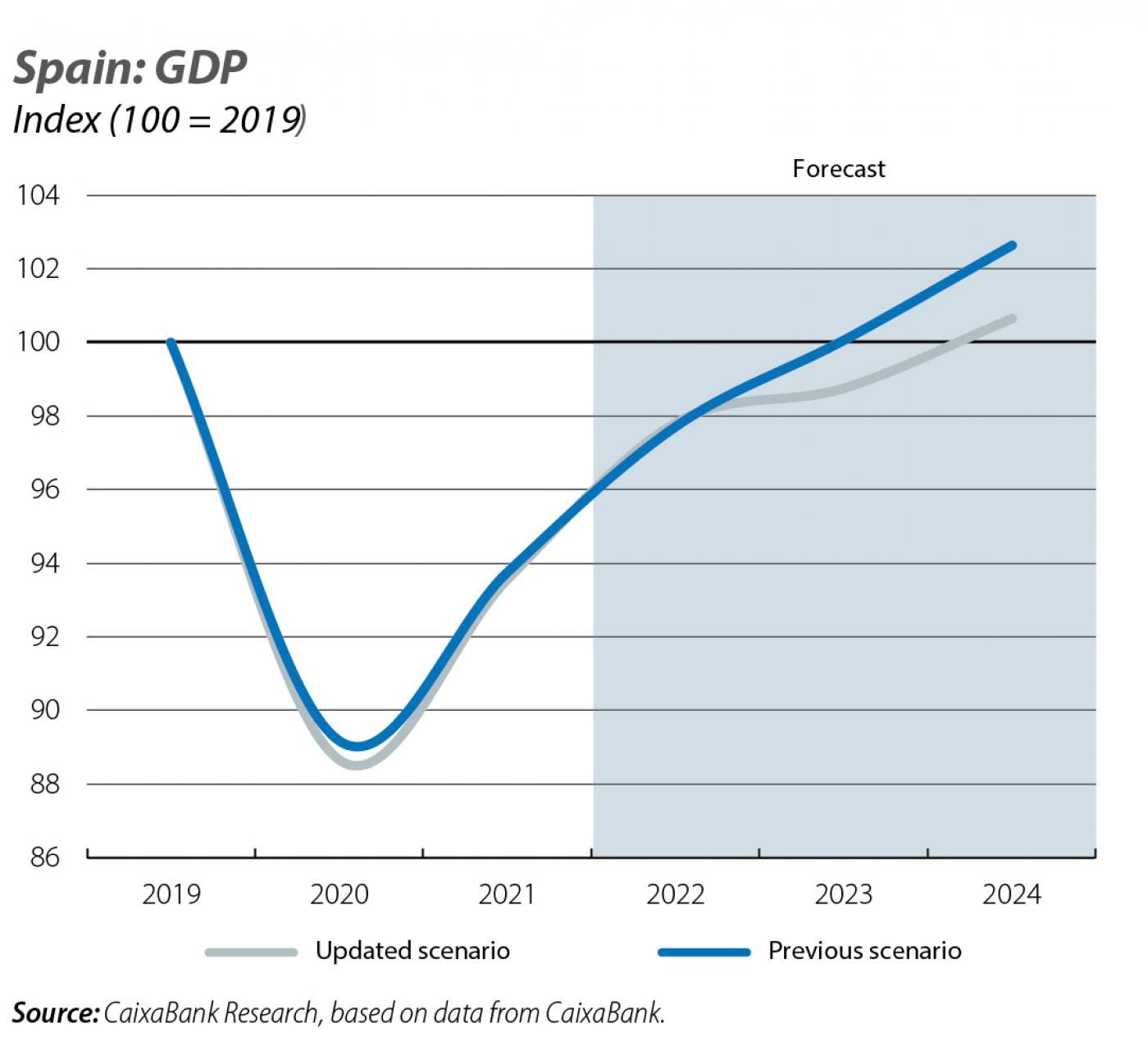 Following a strong rebound in GDP growth in Q2 (1.5% quarter-on-quarter), the economic activity indicators point to a cooling in Q3. The services PMI has wavered during the quarter and in September fell into recessive territory (48.5 points). The manufacturing PMI entered the contractionary zone back in July and has remained there since (49 points in September). Furthermore, both the official indicators related to consumption – retail sales published by the National Statistics Institute, or the turnover data for large corporations published by the Treasury – and CaixaBank Research’s domestic consumption indicator suggest that household consumption fell during Q3. In contrast, job creation has held up better than expected, and tourism-related indicators suggest a strong summer season (spending by foreign tourists in July-August was only 2.2% below the level of the same months of 2019, compared to –3.9% in Q2). Overall, we expect the economy to grow very moderately in Q3, at 0.2% quarter-on-quarter, although this estimate is subject to significant uncertainty and the risks are skewed to the downside. Social Security affiliation increased in September by 29,286 people, exceeding the average for the month of September in the period 2014-2019 (+14,300). However, despite a strong September, job creation for Q3 as a whole has moderated, with the average increase of 24,000 people falling short of pre-pandemic levels (average of 70,000 in the period 2014-2019). Considering the seasonally adjusted number of registered workers not on furlough, the growth compared to the previous quarter moderates to 0.7%, versus 1.0% in Q2. Slight respite in the inflation data

While inflation remains very high, the September figure of 9% marks a notable reduction from the 10.5% registered in August. Core inflation also moderated, albeit more gently, to 6.2% (6.4% in August). This moderation is mainly due to the fall in energy prices. Electricity prices in particular have dropped sharply, as have fuel prices. Also, transport prices were affected by the subsidies introduced for public transport. Despite all this, to the extent that the moderation in inflation has been driven by energy prices, which have been highly volatile in recent months, it is still too early to rule out further rallies. 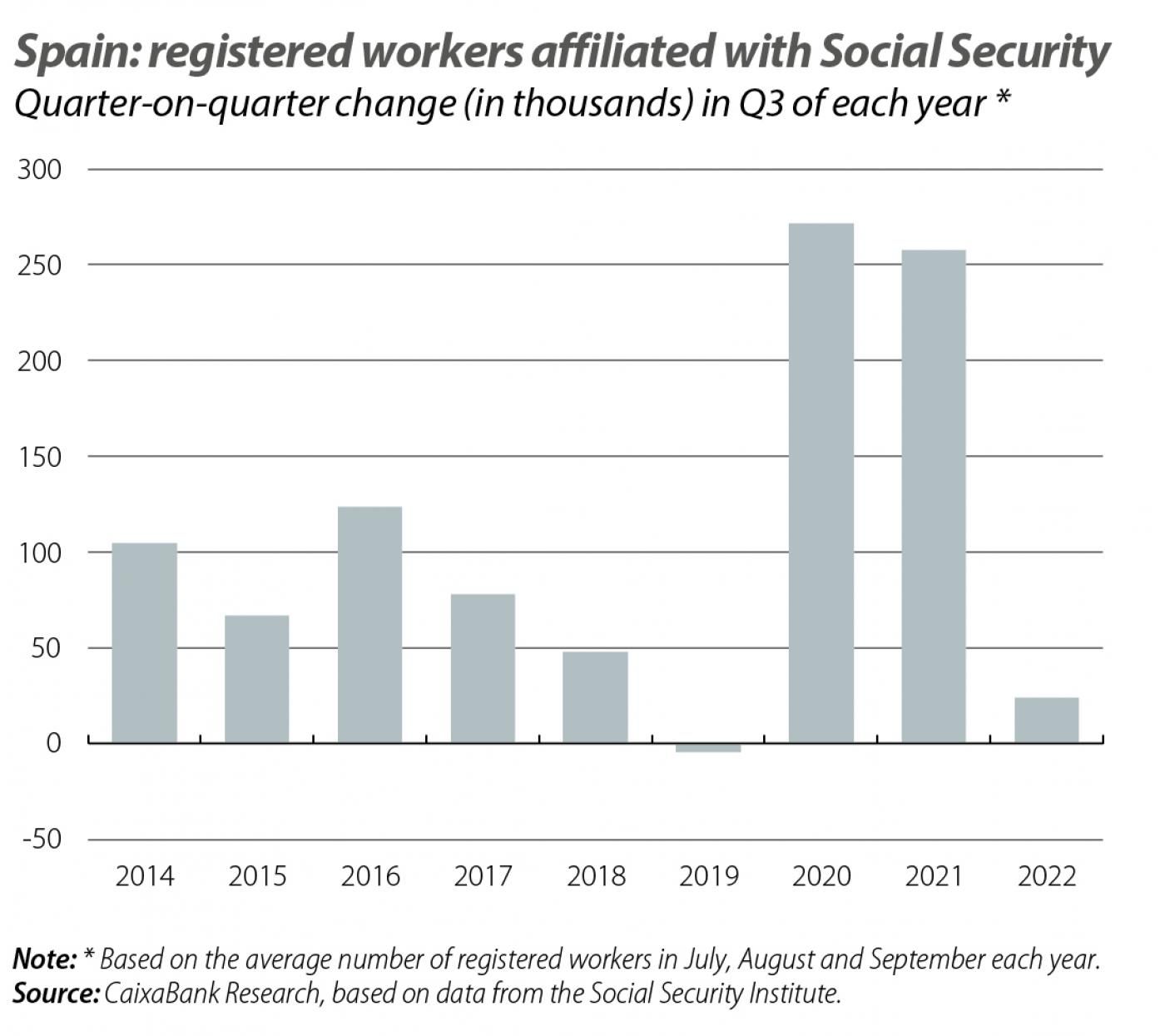 House prices based on valuations grew by a modest 0.4% quarter-on-quarter in Q2. This is well below the figure registered in the previous quarter (2.4%) and brings the annual rate down to 5.5% in Q2, compared to 6.7% in Q1. We believe that some of the factors that have been stimulating demand will gradually lose momentum (slower growth in real disposable household income, a climate of greater uncertainty, and rising interest rates). Thus, the July sales figure already shows signs – albeit faint – of a moderation in demand: the number of sales rose 8.0% year-on-year in July, whereas the figure for the first half of the year stood at 23.2%. 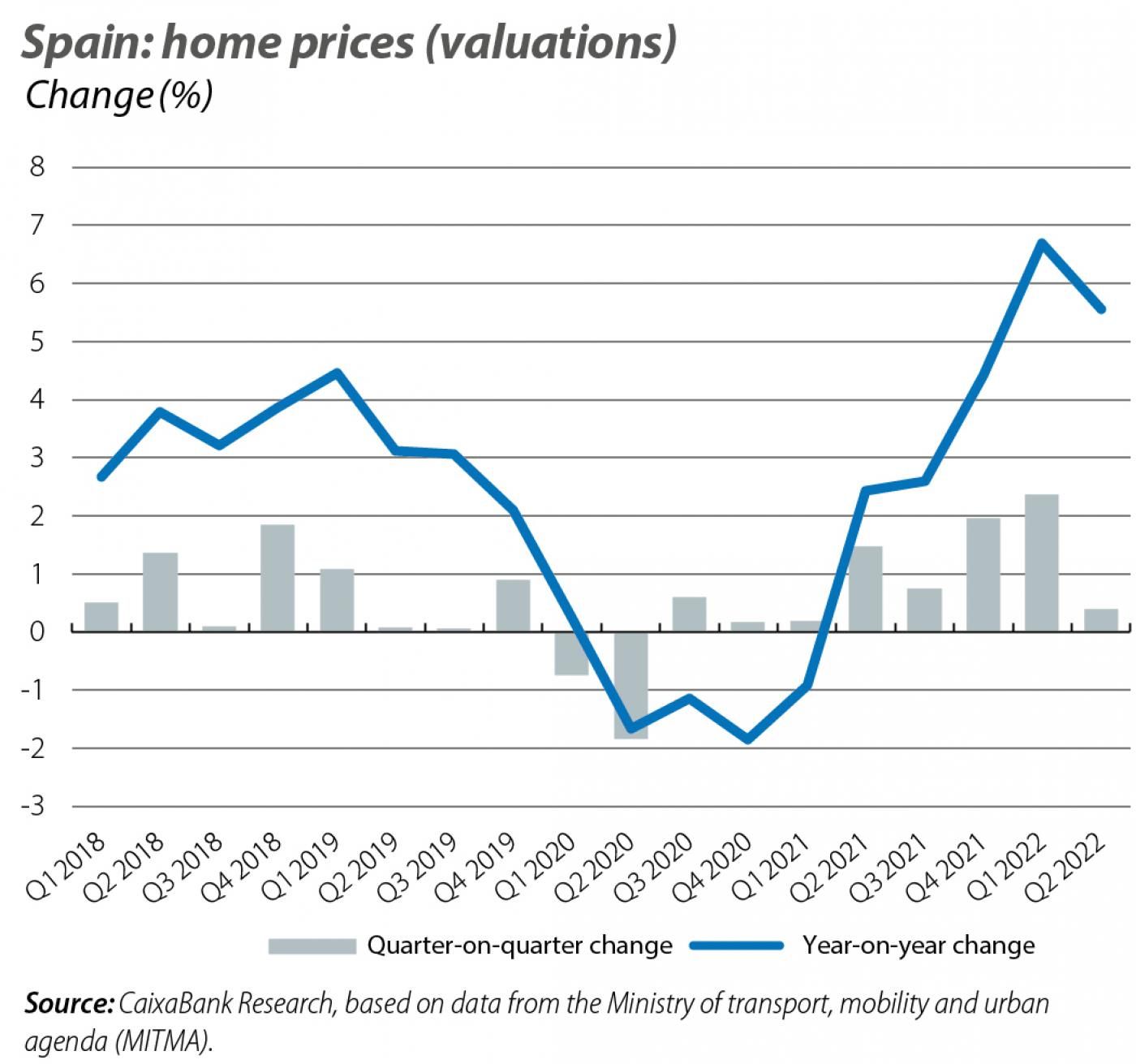 The general government deficit is substantially lower than last year

Up to June, the budget deficit excluding local public-sector corporations stood at 2.3% of GDP. This is lower than the 4.5% for the same period of 2021 and slightly above the 2.2% of June 2019. This improvement is the result of a significant increase in revenues, at 12.7% year-on-year in the first six months of 2022, compared with just a 1.3% increase in expenditure. On the revenue side, tax revenues registered far higher growth than social security contributions (16.5% versus 5.4%), favoured by the increase in prices on which taxes are calculated, especially in the case of taxes on production. On the expenditure side, the decrease in social benefits (linked to the gradual disappearance of COVID-related measures) is offset by the growth in employee remuneration (2.6% year-on-year) and intermediate consumption (7.5%). Interest expenditure, meanwhile, rose 13.8% year-on-year in a context of tightening financial conditions. 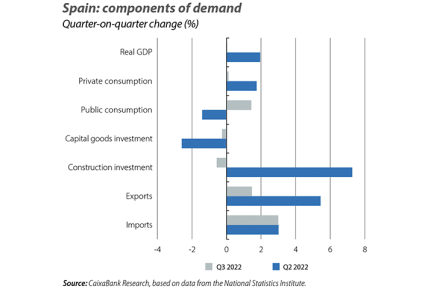 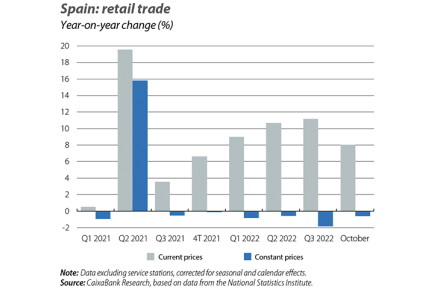