A better outlook for growth in spite of several elections. At a European level, March saw three important events that highlight how economic activity is improving despite high political uncertainty. First, the ECB improved its risk assessment due to a stronger recovery, slightly upgrading its growth forecasts for the euro area to 1.8% in 2017 and 1.7% in 2018. This is in line with CaixaBank Research forecasts of 1.7% both for 2017 and 2018. Second, in the political sphere, the Dutch parliamentary elections on 15 March marked the start of Europe’s electoral calendar with a favourable outcome for the incumbent government. However, all eyes are on the French presidential elections at the end of April, a key source of risk for the euro area’s economy. Lastly, on 29 March the UK formally triggered the procedure to leave the EU, beginning two years of negotiations. Given the considerable links between the EU and the UK, both parties have to lay the foundations for a new relationship that is as orderly as possible. But the process will be complex and uncertainty is high.

Economic activity indicators point to more solid growth in Q1. In March, the composite business sentiment index (PMI) for the euro area reached its highest level since April 2011, at 56.7 points (clearly above the 50-point threshold for the expansionary zone). March’s economic sentiment index (ESI) also reached a peak since 2011 at 107.9 points. Economic activity indicators accelerated across all countries. In Germany the PMI composite index rose to 57.0 points (56.1 in February) while the ESI climbed to 109.2 points. French indicators performed even better. The composite PMI reached 57.9 points (55.9 in February) and the ESI rose to 104.9 points, suggesting economic activity is speeding up slightly. Nevertheless, the upcoming French presidential elections are a considerable source of risk and the medium-term growth projections for the French economy are also rather disappointing. The French president elected in May will therefore need to carry out reforms.

Consumption indicators point to strong domestic demand. Retail sales rose by 1.0% year-on-year in January. Although this figure is slightly lower than December (1.2%), it is still above average for the past two years. The euro area’s consumer confidence index stood at –5.0 points in March, maintaining the upward trend starting in Q2 2016. Household consumption will continue strong over the coming months, boosted by improvements in the labour market and accommodative financial conditions.

Economic growth translates into job creation. Employment rose by 0.3% quarter-on-quarter for the euro area as a whole in Q4 2016 (0.2% in Q3), ending the year at 153.9 million workers (the highest level since Q3 2008). This increase in employment was widespread across countries but especially in Spain and Portugal, both up by 0.4%, and also Italy with employment rising by 0.3% after the previous quarter’s dip (–0.1% in Q3 2016). Growth in employment was more moderate in France and Germany (0.2% and 0.1%, respectively), although it should be noted that the German economy is close to full employment. Higher employment is gradually leading to wage rises, up by 1.6% year-on-year in Q4 in the euro area overall, slightly higher than the average growth in Q1-Q3. But there are big differences between countries, reflecting their highly disparate labour markets. Wage costs rose faster in Germany (2.9% year-on-year) and France (1.5% year-on-year) while posting weak growth in Italy after several quarters of decline.

Inflation continues to normalize. Euro area headline inflation, measured by the harmonized index of consumer prices (HICP), stood at 1.5% in March. This figure is 0.5 pp below the 2.0% posted in February, due primarily to a smaller contribution by its volatile components (energy and unprocessed food). The base effect of the slump in oil prices towards the end of 2015 has also started to dwindle. This had led to large positive contributions from energy prices but oil has now stabilized at around USD 50-55 per barrel. Core inflation, indicating the medium-term inflationary trend, stood at 0.7% in March, 0.2 pp below February’s figure. This slight dip was caused by a smaller contribution from service prices due to the calendar effects of Easter, which falls entirely in April this year while in 2016 it was in March. Beyond this one-off factor, we expect core inflation to recover gradually over the coming months thanks to the growth in economic activity and improved labour market conditions.

Portugal’s economic growth is looking more solid as the country’s macroeconomic imbalances are corrected. Portuguese GDP grew by 2.0% year-on-year in Q4 2016, the fastest growth rate since 2010. Private consumption performed particularly well in Q4, up by 1.1% quarter-on-quarter (0.4% in Q3), while investment rose by 4.6% quarter-on-quarter (0.2% in Q3). Growth in public consumption was much more contained, however, namely 0.3% quarter-on-quarter. This strong growth in domestic demand boosted imports (up by 4.5% quarter-on-quarter), resulting in the foreign sector making a negative contribution to quarter-on-quarter GDP growth (–1.0 pp) in spite of good export figures (up 2.5% quarter-on-quarter). These data confirm that Portugal’s economic growth is more balanced in the current expansionary phase beginning in 2014, with domestic demand driving growth and healthy exports. For 2016 as a whole, GDP increased by 1.4% and the growth rate is expected to be similar in 2017. CaixaBank Research’s scenario predicts 1.5% growth in GDP this year.

The budget deficit is falling but public debt remains high. Portugal’s fiscal balance ended 2016 at –2.1% of GDP, outperforming the stability target set by the European Commission (–2.5% of GDP). This figure is 2.3 pp better than the one posted in 2015 (–4.4%), thanks to a 0.9% increase in revenue and 3.8% decrease in expenditure. Revenue growth was due both to the economic recovery and also extraordinary measures such as the debt settlement programme (PERES), while expenditure was cut via reductions in public investment, unemployment benefits and debt interest payments. After improving its fiscal balance, the Portuguese government has asked the European Commission to leave the excessive deficit procedure. Nevertheless, given the country’s public debt of 130.4% of GDP, fiscal consolidation will have to continue over the coming years.

Portugal’s current account surplus continues to increase gradually, at 1.0% of GDP in January (cumulative over 12 months). Between 2000 and 2008, Portugal’s foreign sector suffered from a persistent current account deficit, reaching –12.1% of GDP in 2008, resulting from a pattern of strong domestic consumption, low savings and poor export competitiveness. This negative trend has since been corrected. First via the adjustment in imports due to the impact of the economic recession. More recently, a series of structural adjustments (fiscal consolidation, private deleveraging and better export specialisation, both in products and destinations) have helped to correct this trend. The country now has a moderate current account surplus. In composition terms, there has been a sustained increase in the services balance surplus and a correction in goods balance deficit. In January, the services balance posted a surplus of 7.1% of GDP and the goods balance a deficit of 5.0% of GDP. 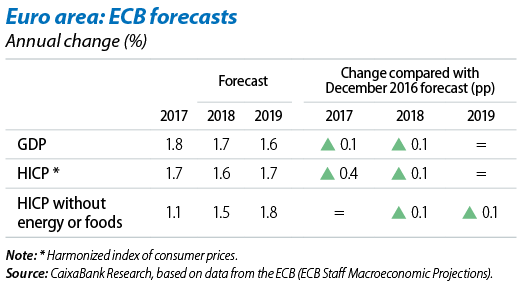 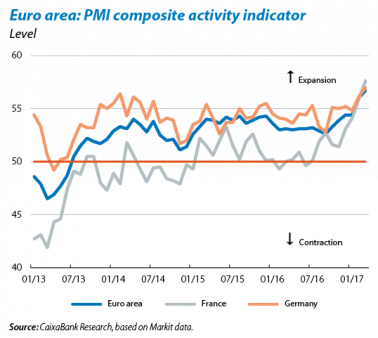 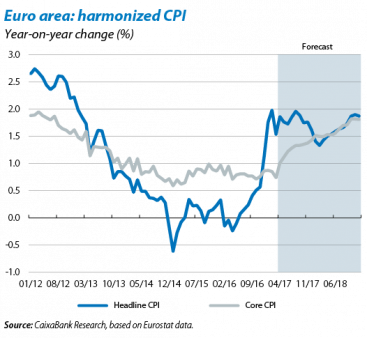 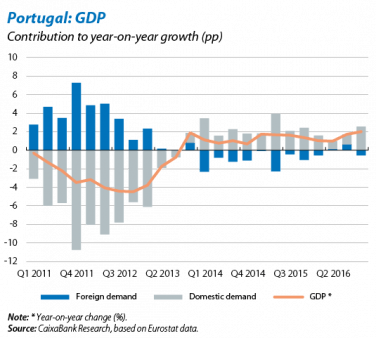 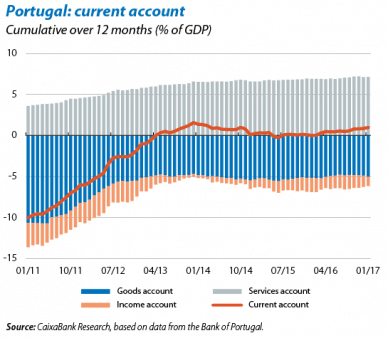