Europe gives new impetus to its economic policies. Faced with the unprecedented impact of the pandemic on the economy, economic policy is generally responding rapidly and with ambitious measures. That said, there are significant differences between regions and countries, with advanced countries, given their greater capacity to take on debt, deploying a more decisive battery of measures than emerging countries. There is also significant disparity among advanced countries, which is largely explained by differences in their capacity to implement a fiscal stimulus (greater margin in the US and in the economies of the core of the euro area than in Europe’s periphery). However, in May, European institutions took an important step forward in implementing a common European response to the economic impact of the COVID-19 epidemic. In particular, a few days after France and Germany expressed their support for a possible 500 billion euro package to be distributed among EU countries in the form of non-reimbursable transfers (thereby not increasing states’ public debt ratios), the European Commission proposed a Recovery Plan that would include a fund of some 750 billion euros (5.4% of EU GDP), most of which (approximately 500 billion euros) would be disbursed in the form of transfers, with the rest taking the form of loans. In addition, the funds would be obtained through the issuance of truly European debt by the European Commission, which would be supported by an increase in the capital ceiling of the EU budget (from 1.2% of GDP to 2.0%), which would also include the creation of new taxes at the European level. The funds would be evenly distributed over a four-year period (between 2021 and 2024) and the allocation between countries would take into account the severity of the impact of the coronavirus. Although there are still no official figures on the potential distribution by country, we estimate that Spain could benefit from an annual sum of between 1.5% and 2.0% of its GDP (see further details in the Brief Note of 29 May 2020 entitled «Propuesta de Plan de Recuperación»). This proposal, however, will have to be approved at the European Council (in June or July) and then ratified by the European Parliament and by all Member States.

COVID-19 deals a heavy blow to economic activity, but there are signs of a gradual revival

Greater declines are expected in Q2 2020, but an incipient recovery occurred in May. The latest indicators show a sharp decline in economic activity in April caused by the extension of the lockdown throughout the month, which also means that more weeks will have been affected by the restrictions on mobility in the second quarter than in Q1. Specifically, the Bank of Portugal’s coincident indicators for aggregate economic activity and for consumption (which have a close correlation with GDP and consumption) fell to –1.7% and –2.7% in April, respectively, accentuating the –0.9% and –1.5% declines already registered in March. Indicators such as electricity and fuel consumption are also indicative of the extent of the paralysis in activity in April. Electricity consumption on working days fell by 13.8%, diesel consumption fell by 46.9% and that of petrol, by 58.4%. Data on credit and debit card payments also reflect a drop in consumption, as they fell by around 38% in April. As for May, the available indicators are still limited, but they suggest a slight improvement in economic activity (e.g. car sales and mobility indicators). In the same vein, the credit and debit card purchasing index recovered to 75 points (59 at the end of April and 44 at the end of March). However, electricity consumption continues to show a weak recovery, as the average daily consumption in the first 20 days after the lockdown was eased was 1.8% lower than in the previous 20 days, despite the percentage of companies in operation increasing to 90% from the 84% registered in the second half of April.

The contraction of the economy will be felt in the labour market. The first signs of the impact of COVID-19 on the labour market were already apparent at the end of Q1: there was a reduction in employment of 0.3% year-on-year (the first since Q3 2013), as well as a significant increase in the inactive population (some unemployed people were reclassified as inactive due to their inability to actively seek work because of the restrictions imposed to curb the pandemic). Yet the latest data confirm that the impact will be greater in Q2. For instance, the number of people receiving unemployment benefits increased by more than 17% year-on-year in April, reaching 197,949 people. At the same time, the number of the number of registered unemployed in job centres rose by 30.1% year-on-year in May (based on the latest data up to 26 May), while collective redundancies have affected more than 2,500 people since the state of emergency was declared (just under 1% of the unemployed population). Finally, as of 27 May, 1,332,114 people were on furlough, a situation mainly affecting workers in the manufacturing, retail, accommodation and catering industries (which account for more than 57% of all furloughed workers).

The current account balance deteriorated in Q1. The current account balance worsened by 595 million euros over the past 12 months and reached –0.3% of GDP in March, which represents a 2-decimal-point decline compared to December 2019. This deterioration is largely due to the reduction in the tourism balance and the decline in the sector’s revenues in March. With this deterioration, the economy’s external lending capacity declined to +0.7% of GDP.

The fiscal budget balance deteriorated due to the impact of the pandemic. In April, the fiscal balance stood at –2.5% of GDP (year-to-date), worse than the –1.9% registered in the same period of 2019. The impact of the COVID-19 outbreak on the public accounts was particularly visible in the deferral of revenues (320 million euros) and in the significant increase in some expenditure items, such as current transfers and the acquisition of goods and services. Overall, it is estimated that COVID-19-related expenditure already implemented up to April amounted to 345 million euros (0.2% of GDP). Over the coming months, the impact of the expenditure related to economic support measures will become more visible as the aid measures are implemented and, potentially, expanded. 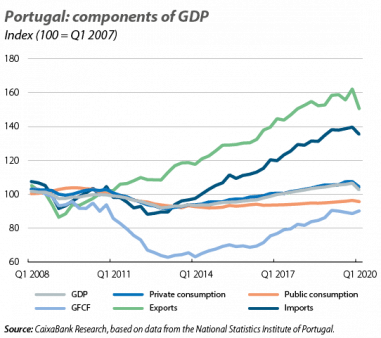 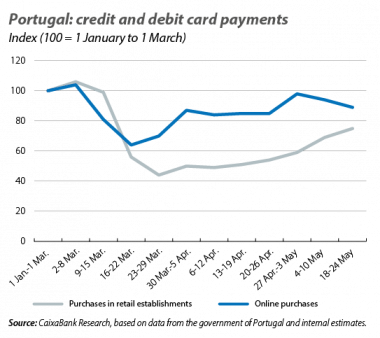 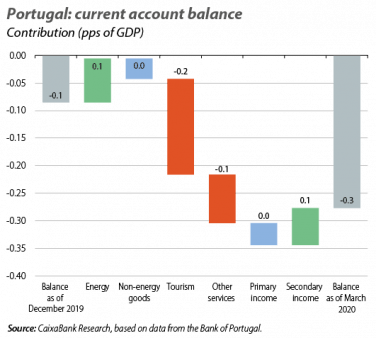 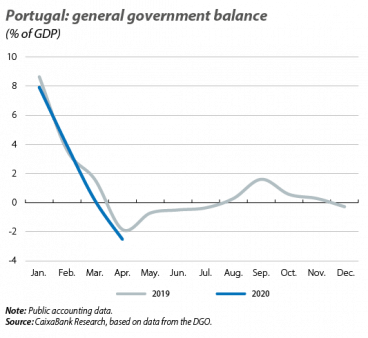