The run of bad surprises in international economic indicators over the last few weeks has left its mark on the markets. Commodity prices have been particularly hard hit. Stock markets have looked weak, although some have managed to stay in the zone of cyclical maximums (such as the US stock market), but others have weakened from already depressed levels (for example, the Spanish stock market). Monetary interest rates and yields on sovereign debt have fallen both in the USA and in the euro area (including the periphery countries).

In the USA, the reappearance of the spectre of relapse is reminiscent of the pattern over the last three years: aggressive monetary boosts, hopes of revival, incipient improvement, debate regarding the Federal Reserve's exit strategy, disappointing growth and further stimuli. Fortunately, on this occasion there are very good reasons to believe that recent figures are due to a transitory bad patch and that the US economy will maintain its cruising speed. Moreover, this episode might possibly serve for the Fed to reassert its belief that too many stimuli are better than too few. Given this scenario, stock market losses are merely a temporary correction and sovereign debt yields will remain at an all-time low for a long period of time.

The Bank of Japan's actions constitute another key factor. The gestation process for its ambitious quantitative easing plan has already affected the foreign reserve and bond markets (helping to push down yields in a number of countries). After the «go-ahead» received at the G20 meeting, this programme is likely to be comprehensively implemented, thereby prolonging the reflationary effects not only for Japan itself (continuity in the downward trend of the yen and upward trend for the Nikkei) but also at a global level.

The panorama in the emerging countries has both positive and negative points and a wealth of fine distinctions.
The difficulties encountered in controlling inflation, reviving growth and becoming the motor of the international economy are in addition to doubts regarding their true long-term potential, particularly in the BRIC countries. This is reflected in listless stock markets but lively debt markets. The authorities have already started to apply expansionary measures, combining monetary with fiscal measures depending on the circumstances. The fact that there is ample room in this area, together with the continuation of structural reforms and the low level of public and private debt, suggest the economy will not take long to revive. Stock markets and currencies will benefit (with a leading role for the Chinese yuan's appreciation).

The euro area continues to be the weakest link. In this case, the doubts regarding growth capacity seem more justified, both in the short and long term. This is the reason behind the relatively bad performance by Europe's stock markets which have continued to lose ground compared with the USA and Japan. However, there are grounds to expect better performances from now on. Tail-end risks have shrunk convincingly. On the one hand, the political commitment to reinforce EMU seems firm, as testified by the advances being made to complete the institutional framework and consolidate common economic governance. On the other hand, the presence of the ESM and of the ECB's OMT programme is avoiding the selling spirals in sovereign debt markets that inflicted such damage during 2010-2012. This has been indicated by the calm that reigned during the Cypriot crisis and the political impasse in Italy.

Economic policy is being shifted, albeit timidly, towards expansion. In the fiscal area, all the evidence suggests that the deadlines for reducing public deficit will be eased in numerous countries. Regarding the ECB, there is a rumour in the markets that it might implement measures both in the area of official interest rates and unconventional measures. A cut in interest rates is now more likely and we are also likely to see a mechanism started up to boost SME financing, especially in periphery countries.

The normalization of the banking sector is still pending. Unfortunately, some actions by the political authorities have had a negative effect. Specifically, the Cyprus bailout exposed the debate, in an untimely and disorderly fashion, regarding how deposits, bonds and the rest of bank liabilities will be treated in future crises. This was not a good time for such a debate, given the hypersensitivity that still exists regarding this issue among the public and investors. Consequently, bank bonds and shares were notably punished, and the overshooting is now gradually tending to correct itself. Apart from the direct effect of the relatively large weight of this sector in the indices for both types of assets, there is also as significant effect through the central role played by the banking system in financing the euro area's economy, with the consequent macroeconomic repercussions.

We expect the authorities to be very sensible regarding the upcoming events in the banking sphere. The negotiations to design and start up the different elements of banking union form the core of these events. However, there are two additionally important elements: the stress tests prior to the single supervisor starting operations and Slovenia's likely bailout. Satisfactory results on these two fronts would help to combat financial fragmentation, facilitate private sector financing and, ultimately, contribute to exiting the recession.

This possible improvement in conditions in the euro area would be a great help for Spain's financial markets. International perception of the country's solvency has been improving, as shown by the notable reduction in the risk premium on sovereign debt and the larger number of bonds in foreign hands. However, there is still a lot of scepticism concerning Spain's capacity to return to the path of sustainable growth. This is weighing heavy on the stock market, particularly on the banking sector. Another negative factor for share prices is regulatory uncertainty, once again with the banking sector as the main target but also affecting other important industries such as electricity. Restructuring public accounts, progressing with structural reforms and clarifying regulatory frameworks is the contribution we expect from the Spanish authorities for the Spanish stock market to regain its appeal and improve its performance.

Companies are still immersed in a twofold process of improving their solvency and efficiency. The former (financial deleveraging) has already been recognised by the corporate bond markets with low risk premia for large Spanish companies with access to capital markets. The latter (better bottom line potential) not yet, neutralized by the disappointing figures still coming from the macroeconomic environment.

In short, the market environment has contrasting influences at both a global and local level: unfavourable figures for economic activity, very easy liquidity conditions and steps being taken by political powers that are slow but in the right direction (albeit with some stumbles).

Investors will have to continue putting up with this mixed scenario in the short term. The money and bond markets are still likely to be well-supported, while risk assets will become notably volatile although without any huge downward pressures. On the stock markets, the announcement of corporate earnings should bolster share prices. In fact, this is already happening in the USA, the first country to publish its corporate results. With regard to commodities, we see the recent drop in prices as a short-lived occurrence that is not only due to the latest weak figures for global growth but also to temporary factors such as speculative sales by pseudo-financial investors (particularly evident in the plummeting gold prices mid-April). In the case of oil, we expect it to pick up slowly towards its level at the start of the year.

In the medium and long term, we expect a scenario of global economic revival, regional rebalancing, contained inflation and a slow withdrawal of monetary stimuli (so that liquidity will still be abundant). The outcome would be a gentle improvement in yield curves and gains for international stock markets.

Unfortunately, there are big risks. Two stand out in the short term. Firstly, macroeconomic indicators might still provide some negative surprises. Secondly, possible disagreements between euro countries regarding monetary and fiscal policy or details of banking union could make the euro markets nervous, particularly within the current situation of political and social discontent. In the medium and long term, the main risk is posed by ultra- expansionary monetary policies not only failing to revive growth but also resulting in destabilizing financial bubbles. 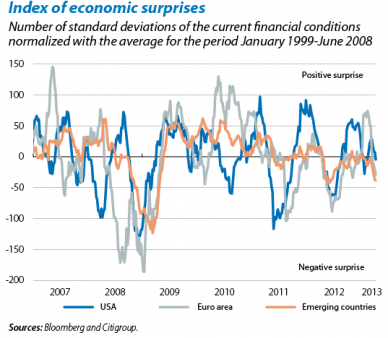 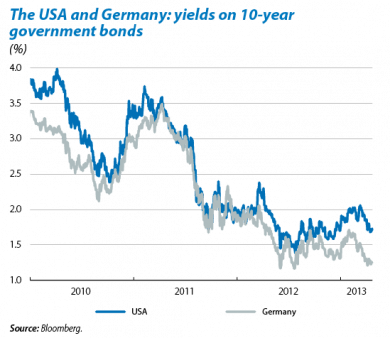 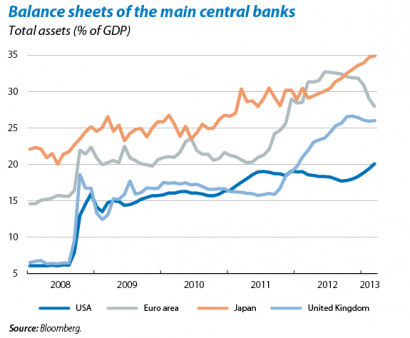 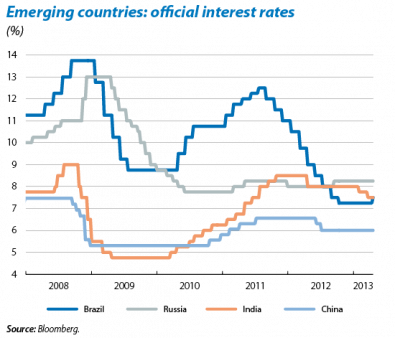 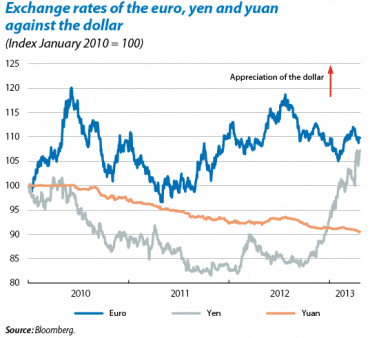 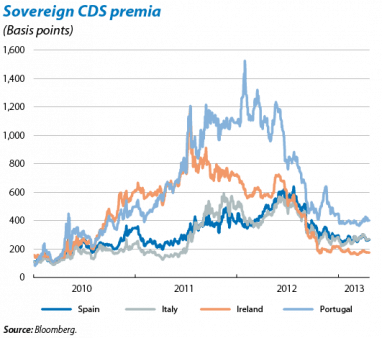 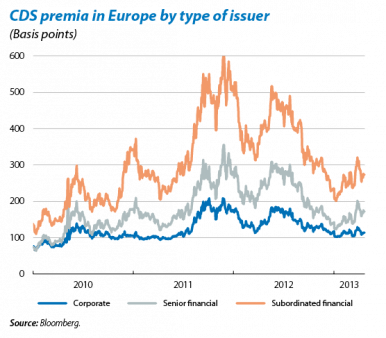 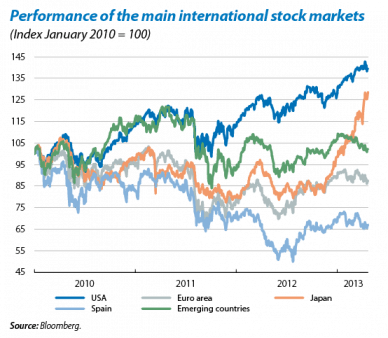 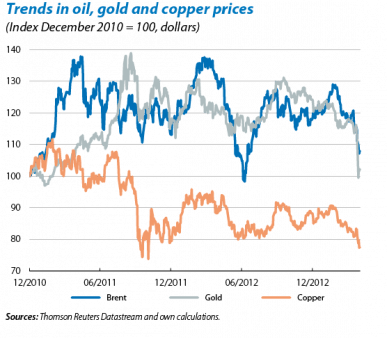