Recovery, but with differences between Germany and France and Italy

The recession is gradually being left behind. As expected, the euro area's GDP growth moderated slightly in Q3  (0.1% quarter-on-quarter compared with 0.3% in Q2). This should not be any cause for concern, however, as the good figures from Q2 were partly due to temporary factors. Once discounted, the trend is still positive. What is more worrying is the divergence that is slowly emerging in the growth capacity of different countries. Germany is  reaffirmed as the economic motor; in general, the so-called periphery countries are also gradually joining the recovery. In this respect, of note are the figures from Spain, Portugal and Ireland. The other side of the coin is represented by the French and Italian economies, where a more pessimistic view is taking shape.

France is stuck on the road to recovery and Germany consolidates its position as the driving force for Europe. There is no doubt that the French economy is going through a difficult stage. This is demonstrated by the fall in GDP of 0.1% quarter-on-quarter in Q3, a worse figure than for the euro area as a whole. Business indicators point to this negative differential for the French economy being repeated in Q4. Although the euro area's PMI for manufacturing increased in November, this was largely thanks to the signs of strength provided by German indicators as the French figures worsened. The healthy state of the German economy is also reflected in the IFO business climate index, which in October and November exceeded the figures for Q3. However, the French economy's pulse is much weaker, not only due to the tone of activity indicators in Q4 but particularly because there are serious doubts regarding its capacity to grow in the medium term.

Activity improves in the periphery countries. Italy moderated its rate of decline but has not managed to exit the recession. A loss of competitiveness and lack of reforms augur a less vigorous revival in the Italian economy than in the euro area as a whole. The outlook is somewhat better for Spain: after nine quarters of shrinkage, GDP grew by 0.1% quarter-on-quarter. The figures presented by the Portuguese economy are also relatively encouraging. After three years of economic contraction, in Q2 GDP surprised by growing 1.1% quarter- on-quarter (–0.4% in Q1). In Q3 this growth stood at 0.2%, a figure more in line with Portugal's growth capacity in the short and medium term.

Business indicators continue to rise although the differences between countries are still notable. November's economic sentiment index maintained its upward trend in Germany while taking a breather in France, reflecting  once again the greater weakness of the French economy.

Domestic demand joins the recovery process. The good performance by retail and consumer goods in Q3 indicates that consumption might be gradually gaining steam. Although November's consumer confidence figures are a
little weaker, they are still above the level of Q3 and there is no reason to doubt they will return to the upward trend of
the last few months. This improvement in domestic demand is also starting to be seen in investment. According to
the economic sentiment survey produced by the EC, manufacturing firms in the euro area expect investment to grow by 3% in the coming year. This contrasts with the expectations held for the whole of 2013, namely a fall of 3%. Both consumption and investment had already posted quarter-on-quarter positive growth in 2013 Q2, of 0.1% and 0.2% respectively but the improvement seen in the monthly indicators since then gives cause for relative optimism.

Inflation picks up, allaying fears of the risk of deflation. In line with expectations, inflation increased by 0.2
percentage points and stood at 0.9% in November, thereby halting three months of drops. This change in trend was predicted in our scenario as the fall in inflation over the last few months was especially due to temporary factors (falling oil and unprocessed food prices). As long as these effects continue to lose relative weight and the recovery in domestic demand consolidates, inflation will gradually gain ground. However, the significant effort being made by several countries in the euro area to continuously improve their competitiveness will keep inflation at moderate levels. In this respect, the EC's opinion polls on inflation prospects over the coming months are quite stable and indicate no clear trend. The surprise provided by the ECB last November, when it cut the refi rate to 0.25%, must be interpreted as a further show of commitment by the top monetary authority to a macroeconomic scenario in which prices rise by around 2%.

The improvement in the employment expectations index of the last few months is starting to be seen in the labour market figures. In November, the index of expectations for the industrial sector maintained its upward trend of the last few months and stood at –6.3 points, its highest since April 2012. This is starting to be reflected in the unemployment figures. Specifically, the unemployment rate fell by 0.1 percentage points in October to 12.1%, the first decline posted since 2011 Q1. Germany's labour market is still the one in the best shape, with unemployment at an all-time low and an index of employment expectations that continues to show very significant progress. In France, however, although the unemployment rate fell by 0.2 percentage points in October, the outlook for the labour market is less encouraging. In this case, the index of expectations fell significantly, adding to the rest of the indicators that raise doubts regarding how quickly the French economy can recover.

Exports surprise with poorer growth than expected. Over the last few years, the foreign sector has been the main source of growth in economic activity in the euro area. Its contribution to the recovery was expected to gradually ease
as imports responded to the recovery in domestic demand. But the notable slowdown in export growth occurring over the last few months has come as a nasty shock. Specifically, in Q3 exports fell by 1.5% in year-on-year terms, contrasting with the rise of 8.2% posted in 2012 Q3. Part of this slowdown could be due to the reduction in growth prospects for the emerging countries that occurred this summer when tapering was expected to start in September. However, this drop in growth prospects for the emerging countries has now corrected and a favourable trend continues in export orders. The slump in exports should therefore be temporary.

The EC expects the recovery to continue and build up steam next year. However, it warns that growth will be less substantial due to the need for adjustment in a context of high uncertainty. Nonetheless, the more catastrophic scenarios contemplated a few quarters ago, such as the break-up of the euro, have been dispelled. Similarly, it should be easier to sort out the balance sheets of banks, non-financial firms and households as growth in activity gains ground. The EC insists on the need to implement reforms to accompany the correction of large macroeconomic imbalances, the implementation of Banking Union being particularly important, vital to resolve financial fragmentation. Once achieved, all firms with the same risk profile should be able to enjoy similar credit conditions irrespective of their location.

Macroeconomic imbalances are being corrected but there is still a long way to go. For the third consecutive year, the EC's report that studies trends in 10 macroeconomic indicators has concluded that 16 member states need an in-depth review of their economies. Over the coming months, the EC will propose to those different countries with imbalances a set of measures to redress their situation and could impose penalties if they judge these to be insufficiently applied. The news this year is that, for the first time, the EC has decided to add Germany to the list of countries with homework, largely because of its significant and sustained current account surplus (see the Focus «Report on macroeconomic imbalances: a warning note for Germany»). The important issue is to assess to what extent this is the result of the excellent performance by Germany's export sector or is a consequence of a chronic lack of investment by companies and the public sector. 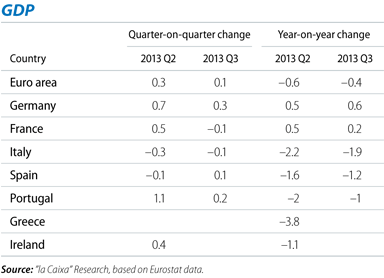 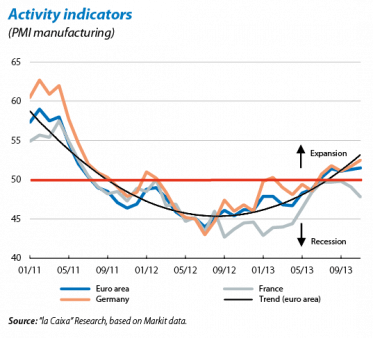 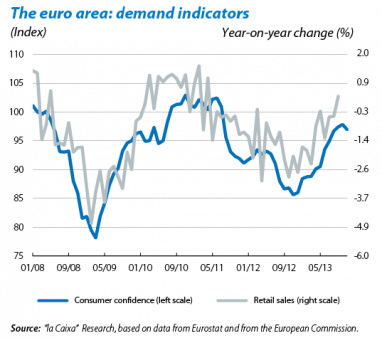 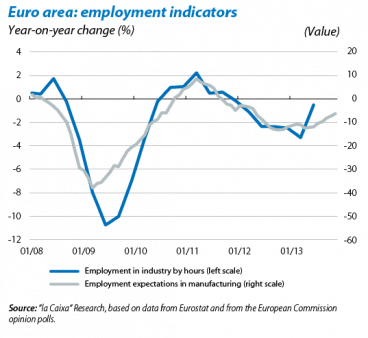 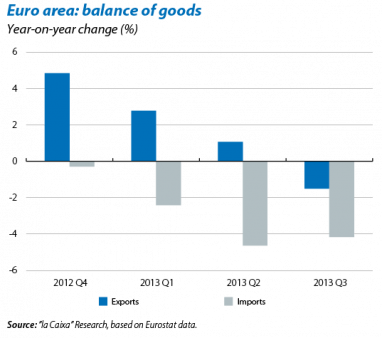 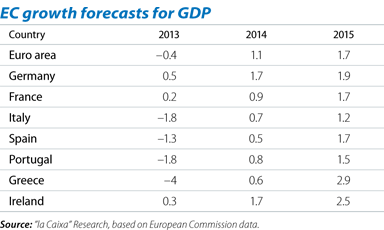