In line with expectations, GDP grew by 0.8% quarter- on-quarter in Q4, bringing the annual figure to 3.2%. The dynamism of consumption indicators suggests that domestic demand is still the main engine of growth, supported by the improvement in the labour market. However, as has been happening since the recovery started in 2013, external demand very probably deducted from this growth: in spite of the good performance by exports, the rise in domestic demand is pushing up imports.

The outlook is positive with a view to 2016 although there are considerable downside risks. According to our estimates, the Spanish economy will grow by 2.8% year-on-year, 0.1 pps more than the forecast one month ago due to the reductionin our forecast for oil prices. The expected good performance by economic activity is based on the fact that the factors supporting growth in 2015 (low oil prices, tax cuts, expansionary monetary policy and the euro's depreciation) look like continuing this year albeit to a lesser extent, so they will continue to boost consumption and investment. Business and confidence indicators point to a good start to the year and therefore endorse this upward adjustment in our forecasts. However, political uncertainty and a less favourable external environment are increasing the downside risks forour main scenario. For example the European Commission's economic sentiment index suggests that the confidence of agents was still high in January albeit with a slight downward correction. Specifically this index stood at 107.6 points that month, a lower figure than 2015 Q4 but still far above the100 points set by the historical average. This somewhat less optimistic impression by sentiment indicators might reflect greater concerns due to international financial unrest and the current political situation. If this uncertainty continued for some time it could end up having a negative effect on the progress of the economy. We must not forget that, in spite of the notable advances made in correcting its macroeconomic imbalances, the Spanish economy is still very vulnerable to changes in sentiment on the part of international investors due to its large international debt position and continuing imbalances in its public accounts (see the Focus «The public deficit: an insufficient adjustment» in this Monthly Report). The report on the sustainability of the public accounts by the European Commission has indicated that Spain's high level of public debt is one of the main sources of weakness in its economy, especially in the medium term.

The recovery is maintaining its intensity for the time being. In spite of increased instability, supply and demand indicators continue to be surprisingly good. In terms of supply, the industrial production index grew by 4.2% year-on-year in November, a figure that is in line with strong growth in Q4. Business sentiment indices (PMI), both manufacturing and services, also ended 2015 significantly above the 50-point threshold that marks the zone of expansion. Solidness can also be interpreted from the trend in industry's growing production capacity utilization, which reached its historical average in Q4. Of note in demand is the strong rise in the different consumption variables as all have continued to grow and at values above their historical average. For example, in December automobile sales recorded a strong rate of increase year-on-year of 16.6% (cumulative over three months).

The private sector spearheaded job creation in 2015 and ensured that the rate did not fall below 3.0% during the second half of the year, a pace that was clearly higher than the one expected a few months ago. After the boom in job creation during the first few months of 2015, largely thanks to the temporary impact of the public sector, a slowdown was predicted that did not occur in the end as private sector employment took over the reins and grew strongly. By sector, most of the recovery for the year as a whole was concentrated in services with 421,500 extrajobs; industry and construction played an important role throughout the year but lost steam in Q4.

The increase in employment improves the gross disposable income of households. In 2015 Q3 the gross disposable income (GDI) of households increased by2.1% year-on-year (cumulative over four quarters), boosted by wage-earners which can be explained by the rise in employment as wages remained subdued, and also by the increase in the gross operating surplus of the self-employed. Undoubtedly this larger GDI boosted consumption which, as it ended up growing at a faster rate, led to a reduction in the savings rate. Specifically this fell by 0.5 pps in Q3 to 9.2% of GDI. Over the coming months, and temporarily while the recovery consolidates, we expect the savings rate to be below its historical average of 9.8% due to a greater increase in consumption than the rise in GDI.

Given this favourable situation, demand for credit continues to grow. According to the bank lending survey in Spain for Q4, the criteria used to approve loans did not change while requests for financing increased in general across all kinds of loans. The expectations of the institutions surveyed also suggest that requests for loans will increase in 2016 Q1. On the other hand, judging by the continued reduction in the NPL ratio for the banking sector (in November it fell by 0.3 pps to 10.3%, 2.4 pps below last year's figure), bank balance sheets are increasingly healthy, which might boost the supply of credit (see the Focus «Spain's banking sector, ready to support the recovery» in this Monthly Report). In this respect, in the follow-up report on the financial aid programme for Spain, the European Commission approves of the measures taken between 2012 and 2014 as it believes they helped to improve banks' resilience, a key factor to ensuring credit remains available.

The real estate market continues to recover, supported by the strong increase in the demand for loans to buy housing. One sign of this is the trend in house purchases which rose in November to 11.7% year-on-year (cumulative over 12 months). Nonetheless, regional differences and excess supply suggest a disparate trend in prices.

Inflation surprises and falls by 0.3 pps in January down to –0.3% although we had predicted a slight rise.This unexpected drop is mainly due to the fall in prices for electricity and energy. With the aim of incorporating lower oil prices than considered a few weeks ago and this unexpected slump in January's figure, we have considerably reduced our inflation forecast for this year. In 2016 we expect inflation to reach 0.5% on average (compared with –0.5% in 2014).The trend in inflation in January was very uneven between Spain and the euro area; while it was negative in the formerit picked up by 0.2 pps in the latter, rising to 0.4%. Shouldthis continue, this inflation gap might help the Spanish economy to continue regaining competitiveness compared with the euro area and thereby boost sales towards this trading partner.

The drop in oil prices will boost the current account balance in 2016. In addition to cheaper energy, the trade balance, both for goods and services, will also support the trend in the current account balance. There was a notable upswing in November in international trade: domestic demand led to a sharp rise in goods imports, namely 2.7% cumulative over three months, although exports rose more, by 2.8%year-on-year, thanks to the exceptional performance by non-energy exports which contributed 5 pps to the overall increase. On the other hand the excellent performance by tourism made a very positive contribution to the good trend in the balance of services. The record figure of 68.1 million tourists visiting Spain in 2015, 4.9% more than in 2014, reinforces this view. 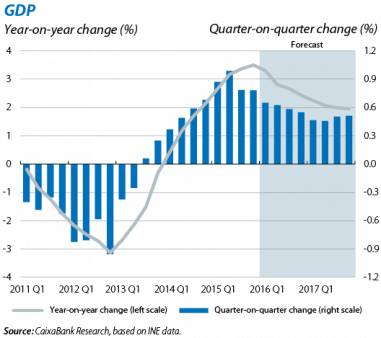 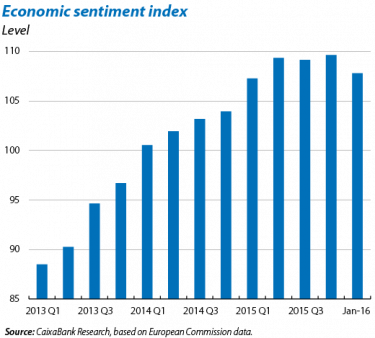 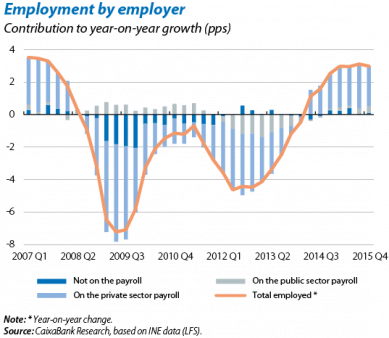 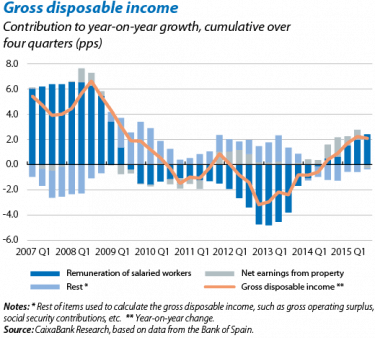