Sailing in a favourable external environment

GDP growth remained high in Q3. GDP grew by 0.8% quarter-on-quarter (3.1% year-on-year), in line with the CaixaBank Research forecast and slightly slower than Q2 (0.9% quarter-on-quarter). Although the breakdown by components has yet to be published, early indicators point to this fast growth being driven by domestic demand, specifically private consumption and investment, especially construction. Exports and imports picked up in Q3 thanks to an increasingly favourable external environment with the global economy speeding up. However, the economic activity growth rate is likely to ease over the coming quarters. This is because of diminishing support from certain factors over the past few years, such as expansionary fiscal policies, spending on consumer durables after postponing such purchases during the crisis, and a moderate rise in oil prices. The government has also revised downwards its GDP growth forecast due to the uncertainty caused by Spain’s political situation. The new macroeconomic scenario contained in the Draft Budgetary Plan for 2018 now predicts 2.3% GDP growth in 2018, 0.3 pp lower than the previous forecast (see the Focus «Ten years of public deficit and counting» in this Monthly Report).

Economic activity indicators already pointed to strong growth in Q3. From the supply side, the indicators for manufacturing were particularly positive. The business index for industry rose by 7.6% year-on-year in August while its PMI index reached 54.3 points in September, a level in line with the average for the first half of the year (54.8). A sharp rise in new industrial orders in August (up 8.2% year-on-year) also suggests the sector’s positive trend will continue in the last part of 2017. This uptick was mainly due to the good performance of industrial orders from the euro area (up 6.6% year-on-year), showing the positive impact on the Spanish economy of the stronger growth enjoyed by our main trading partners. The trend in the services sector, which represents almost two-thirds of GDP, was also positive. Economic activity for this sector accelerated its growth rate in August to 6.2% year-on-year, while the sector’s PMI business sentiment index remained high in September (56.7 points). Regarding demand, the consumer confidence index stood at 0.2 points on average in Q3, slightly below the Q2 average (1.5) but far better than the historical average (–13.6) and the average for 2016 (–3.8). Average growth in retail sales also increased by 1.7% year-on-year in Q3 (a similar rate to the first six months). Private consumption is therefore expected to continue to drive growth.

Very positive employment trend in Q3 2017. The boost provided by economic activity can be seen in the labour market with 521,700 more people employed than a year ago. There was also a considerable drop in the number of unemployed (–589,100 in the past four quarters), reducing the unemployment rate to 16.4% (–2.5 pp in the past year). The labour market improved beyond what was already expected considering that this quarter coincides with the peak of the tourism season. Indeed, in seasonally adjusted terms, employment rose by 0.75% quarter-on-quarter in Q3 (0.84% in Q2 2017). This growth in employment was widespread across all sectors, although especially in the private one. In particular, private sector employment has risen by 463,500 people over the past 12 months, accounting for 89% of the jobs created over this period and in excess of the private sector’s 84% share of all employed people. Nevertheless, the IMF’s annual report on the Spanish economy warns that job creation is still concentrated in sectors with below-average productivity (25% tourism-related, 25% administrative support and 14% public services). The institution also warned of the high temporality of Spanish jobs and of extensive over-qualification in some sectors. Both aspects hinder productivity gains and reduce the economy’s growth potential. The Fund recommends focusing active employment policies on certain groups of people, such as the unemployed and unskilled workers.

Inflation moderates but is on track for a medium-term recovery. In October, headline CPI slowed down its rate of growth to 1.6%. Details by component have yet to be published but this slowdown can be explained by a smaller increase in fuels compared with the rise in October 2016. Inflation stood at 1.8% in September, the latest figure available with a breakdown by component. Food and non-alcoholic beverages contributed positively to growth due to a smaller drop in fruit prices (in year-on-year terms). Leisure and culture also made a positive (albeit smaller) contribution, while housing-related prices (gas and electricity) slowed down. Nevertheless, prices continue to rise very slowly, as shown by core inflation which remained at 1.2% in September. Over the next few months, inflation will continue to slowdown compared with the current figure. This is particularly due to the base effects of electricity prices and, to a lesser extent, the direct and indirect effects of an appreciating euro. In the medium term, however, inflation is likely to see sustained growth, a trend that should occur throughout the euro area. In fact, the ECB announced it would reduce its monthly asset purchase rate in January, from EUR 60 billion to EUR 30 billion. This suggests it now has more confidence in euro area inflation recovering in the medium term. Nevertheless, financial conditions will remain highly favourable in spite of this gradual withdrawal of monetary stimuli.

Accommodative financial conditions boost bank credit. The bank lending survey for Q3 2017 shows that credit standards eased on loans to households for house purchases, crucial for the real estate sector’s recovery. Mortgages for house purchases rose by 29% year-on-year in August, a fundamental support for demand. However, the outstanding mortgage balance is still declining (–2.8% year-on-year in Q2 2017), in line with household deleveraging. Nonetheless, outstanding consumer credit is still growing at a good rate (15.2% year-on-year). Outstanding credit for non-financial enterprises (excluding developers), which are also still deleveraging on the whole, continued to fall in Q2 2017 (–3.1% year-on-year). Developer credit is falling at a very fast rate (–6.7% year-on-year) due to the sale of doubtful assets. However, the NPL ratio is still high in the developer segment, namely 21.5%, far higher than in the other segments (8.5% in August). The European Commission and the ECB, in their eighth report on Spain’s banking sector after the end of the financial aid programme for this sector, highlighted the good performance of the financial system, bank capitalisation and the adjustments made to business models as well as cost structures in order to boost margins. The report points out, however, that a key challenge faced by Europe’s banks in general is to sustain sufficient profitability over the medium term. 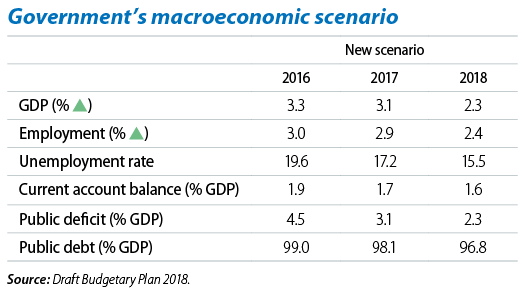