Foreign demand is running out of steam. It contributed 0.4 pp to GDP growth, 0.4 pp less than in Q2. The external sector’s lower contribution is due to stagnant exports and imports in quarterly terms. Nevertheless, these data, although weaker than expected, are within the series’ typical variability and do not alter the external sector’s positive outlook. Looking ahead to the next few quarters, we expect the trend in the foreign sector to remain solid, supported by solid growth in the euro area (the destination of just over half Spanish exports) and synchronised growth at a global level. External demand should therefore continue to make a positive contribution to GDP growth (see the Dossier «The Spanish economy in 2018: the importance of the foreign sector» in this Monthly Report).

Early Q4 indicators point to the gradual slowdown in economic activity continuing. The services PMI index, which represents two-thirds of GDP, fell slightly to 54.6 in October. But it is still clearly in the 50-plus expansionary zone. Manufacturing indicators were positive, however, with a PMI of 55.8 points in October, the highest since 2007. Industrial production also accelerated in Q3 to 2.5% year-on-year (2.2% in Q2). Demand indicators for October pointed to a slowdown due to the uncertain political situation. Spain’s total retail sales fell by 1.1% year-on-year in October, a drop that was particularly marked in Catalonia (down 3.9% year-on-year). However, November’s economic sentiment indicators were very strong. For instance, the European Commission’s ESI index rose to 110.8 points (110.2 in October), the highest for the past 23 months.

Favourable trend in the labour market. The number of registered workers affiliated to Social Security increased by 101,479 in seasonally adjusted terms. This means the job creation rate remained at a high 3.5% year-on-year. The number of unemployed fell by 23,690 people, also in seasonally adjusted terms. National account data for Q3 point to employment increasing by 2.9% year-on-year in terms of full-time equivalent jobs, matching the previous quarter’s record. In the past 12 months, 501,000 full-time equivalent jobs have been created.

Inflation eases in Q4. The recovery in oil prices, intensified by the dollar’s appreciation against the euro, helped to keep headline inflation at 1.6% in November. But price moderation will be the dominant trend in this last quarter of 2017 and early 2018. The base effect of electricity prices, compared with very high levels early in 2017, is accompanied by a moderation in core inflation, which fell by 0.3 pp in October to 0.9%. This decrease was due to a smaller rise in the price of industrial goods (with a share of 24.8% in headline inflation) and services (41.2% share), specifically those related to housing and leisure and culture. For more details on the inflation outlook, see the Focus «The ups and downs of Spanish inflation: changing with energy» in this Monthly Report.

The current account is still in surplus despite rising energy imports. After the publication of September’s current account data, which for the 12-month cumulative period was 1.8% of GDP, we still expect the current account to end 2017 with a surplus of around 1.8% of GDP, close to the 1.9% achieved in 2016. This is because the larger energy bill due to rising oil prices is being offset by the good performance of exports and an income balance that is still supported by low interest rates. The deterioration in the balance of goods is almost entirely due to the larger energy deficit, increasing by EUR 4,867 million cumulative up to September. The non-energy surplus, however, fell by just EUR 467 million between January and September. The improvement in the services surplus is mostly due to tourism, whose income rose by 11.6% year-on-year in the 12-month period up to September. However, the higher expenditure by Spanish tourists abroad, up by 13.6%, has limited the improvement in the overall balance of tourism services.

Tourist arrivals dipped slightly in October. Specifically, 7.3 million international tourists arrived, an increase of 1.8% year-on-year, a notable deceleration compared to the 10.4% year-on-year average between January and September. This slowdown in international tourism was particularly marked in Catalonia (down by 4.7% year-on-year in October). By origin, the arrival of German and French tourists increased slightly in year-on-year terms while the arrival of English tourists, the largest share, has hardly varied at all from one year to the next.

The total general government deficit stood at 2.0% of GDP in September (excluding local government corporations) and the year is very likely to close on target. Up to September, general government had accumulated an adjustment of 1.2 pp out of the total 1.3 pp needed to reach the deficit target of 3.0% of GDP by 2017 (3.1% including bank restructuring costs). By administration, the central government deficit, with data up to October, fell to 1.1% of GDP compared with 2.0% in October 2016. The autonomous communities have also improved, posting a surplus of 0.1% of GDP in September which contrasts with the 0.2% deficit in September 2016. In September, Social Security registered a deficit of 0.6% of GDP, the same as in September 2016. In spite of these positive figures, public debt remains high. In Q3 it totalled 98.6% of GDP, close to the peak of 100.7% of Q3 2016 and well above the 43.8% average for the period between 2006 and 2010, both included. It is therefore important not to become complacent and to continue with fiscal consolidation efforts.

The real estate market continues to improve. House prices published by the Ministry of Public Works, based on the appraised value, rose by 2.7% year-on-year in Q3, 0.7% quarter-on-quarter, recovering from a relatively lukewarm Q2. The sector continues to improve with purchases of non-subsidised residences rising by 13.5% in the 12-month period up to September and a 23.2% increase in new building permits in August. Over a longer timescale, the market is now midway between the levels of 2007, the last year of the bubble, and 2013, the last year of declines. House sales and new building permits have posted cumulative increases of 45.3% and 57.4% compared with the 2013 level but are 41.5% and 79.6% below the 2007 level, respectively.

The NPL ratio is falling and bank loans continue to flow. In September, the NPL ratio fell to 8.33% (down 0.16 pp year-on-year) thanks to the increase in the loan portfolio and the reduction in doubtful loans. Growth in loans and the sale of non-performing asset portfolios will continue to reduce this rate over the coming months. One of the factors enabling banks to continue lending to households and enterprises, as shown by the latest available data, are their healthy balance sheets. In October, new lending to households for house purchases rose by 16.8% year-on-year in the first nine months of the year while new consumer credit was up 17.2%. Lending to SMEs also increased by a significant 8.7%, while new operations for large companies are starting to pick up again (0.5%). 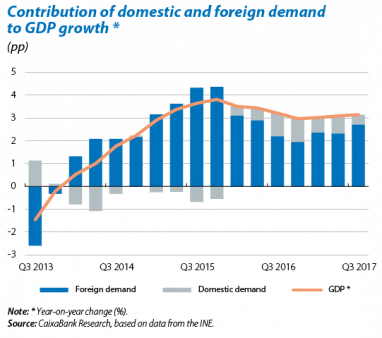 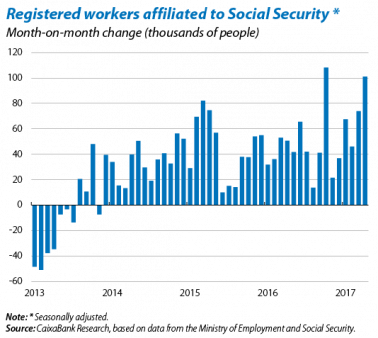 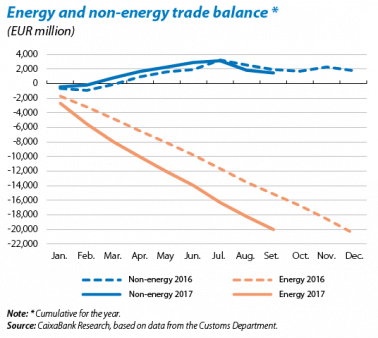 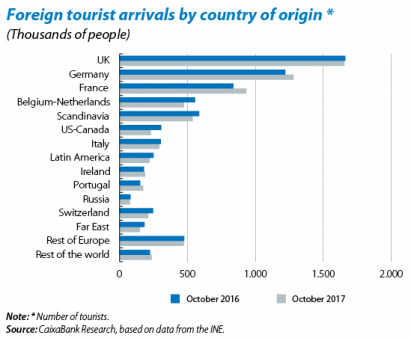 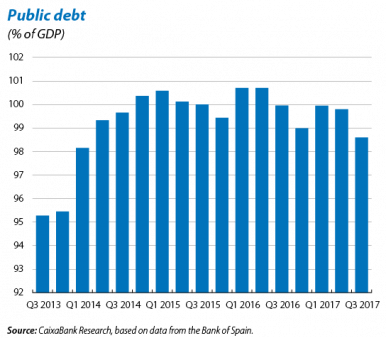 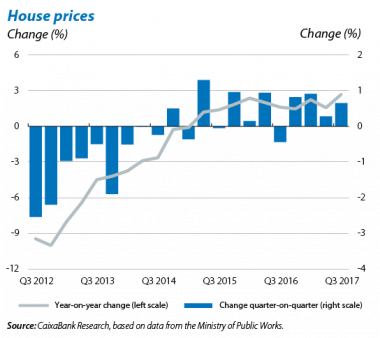