In the run-up to the outbreak of the war, the growth forecast for 2022 was 5.5%. Indeed, the high growth recorded in Q4 2021, which exceeded our expectations, together with the encouraging indicators for Q1 of this year, suggested that growth could end up being even higher. Nevertheless, the earlier than expected interest-rate hikes by the central banks, the persistence of bottlenecks in global supply chains and the rapid rise in inflation invited prudence. With the irruption of the war, the downside risks have risen sharply, forcing us to cut our forecasts for this year. Right now, uncertainty is very high, so it is still too early to put a figure on the impact of the current situation on the economic outlook. That said, it is possible to identify the different channels through which the conflict in Ukraine will affect the Spanish economy. The most important one is the sharp increase in the price of oil, gas and electricity. This will harm the most energy-intensive sectors, such as transportation, metallurgy, fishing, the extractive industry and paper manufacturing. Shortages of some commodities and industrial metals will also affect the manufacturing industry and the agrifood sector. The Spanish economy will also be affected by lower growth in private consumption due to the heightened uncertainty and the fall in purchasing power that will come with higher inflation, lower momentum in exports due to the lower growth of our major trading partners and increased stress in global supply chains. This is its highest level in over three decades. The price of energy, the main cause of the rise in inflation during 2021, will continue to push it up throughout 2022. As early as September, the high energy prices already began to drive up inflation in other components (especially in food). In this regard, the inflation data by component for the month of January (the most recent data at this level of disaggregation) shows that inflation exceeds 2% in 63% of the components (compared to 30% in September), while it is above 5% in 26% of cases (versus 12% in September). As for February, we expect to see an even greater proportion of components above 2% and 5%. Faced with this situation, the tensions in the energy and commodity markets caused by Russia’s invasion of Ukraine will have a considerable impact on inflation. On one hand, there will be a direct impact resulting from increases in the price of gas (and, consequently, that of electricity, which constitutes 4.1% of the CPI), oil (fuels constitute 7.8% of the CPI), commodities and food. On the other hand, the prolongation of high energy prices could exacerbate the contagion effect across the various components of the Consumer Price Index that we have witnessed in recent months. 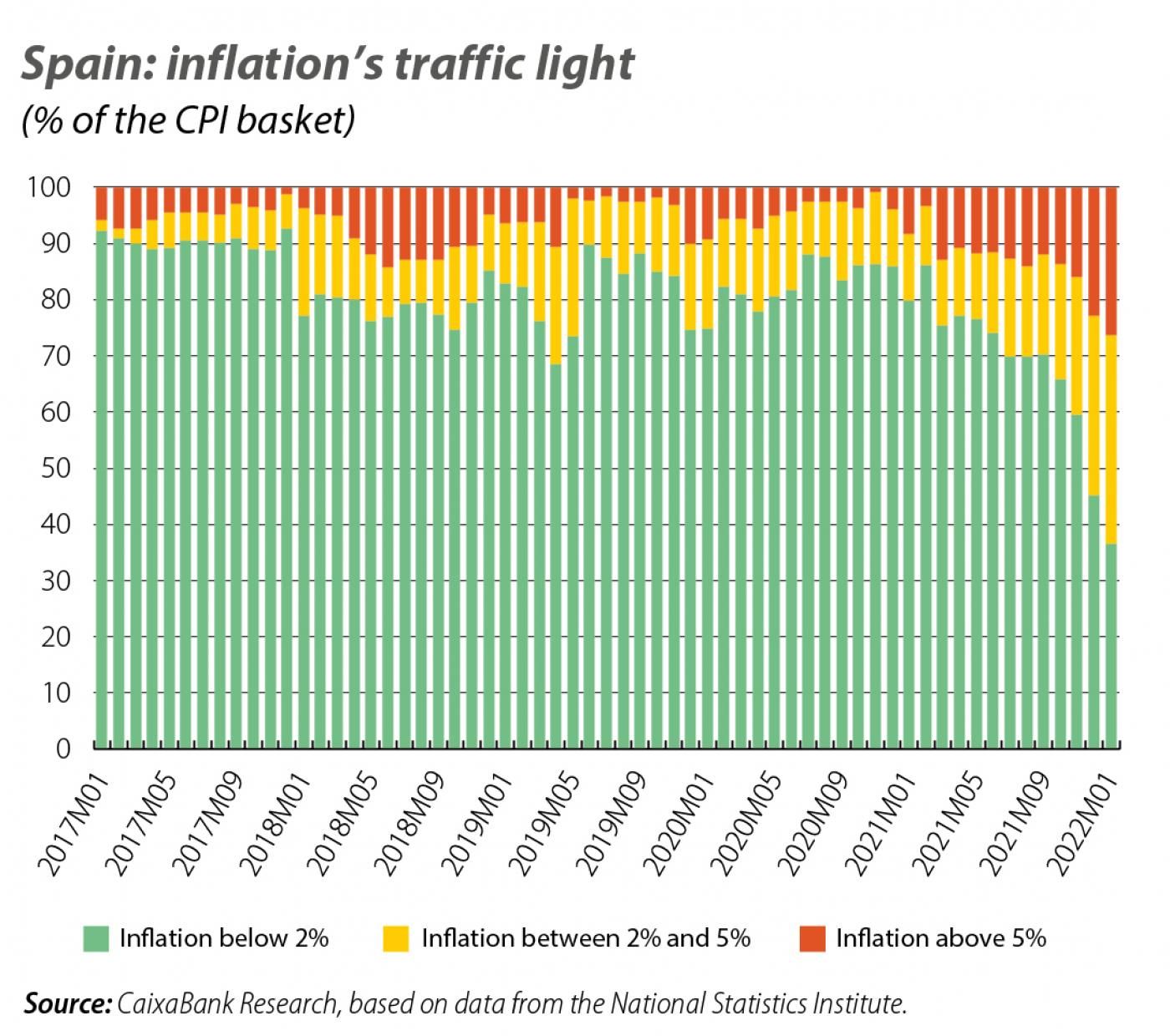 Tourism holds up despite the Omicron variant

The high-frequency indicators for tourism activity tell us that, although the gap compared to 2019 levels widened in January due to the wave of COVID infections, the impact has been less intense and persistent than expected. According to the data on flights operated at Spanish airports, in January there was a decline, falling back to the level of June 2021, but in the first two weeks of February there was already a clear recovery. As for the outlook for this year, it should be noted that the direct exposure of the tourism sector to Russian visitors is low. In 2019, just 2% of foreign tourists came from Russia (less than 1% in 2021). While the environment of greater uncertainty may weigh on international mobility, Spain’s perception as a safe destination compared to other Mediterranean competitors could mitigate the final impact. 2021, a year of vigorous recovery for the real estate sector

The sector’s strong performance can be largely explained by the strength of its demand. In December there were 48,119 home sales, 32.9% more than in the same month of 2020. In 2021 as a whole, there were 565,523 transactions, 34.6% more than in 2020 and 11.9% more than in 2019. To a lesser extent, the supply has also joined the recovery: up to November 2021, some 106,000 new homes were approved (12-month cumulative figure), very much in line with 2019. With regard to prices, the valuation of unsubsidised housing rose by a significant 2.0% quarter-on-quarter in Q4 2021 (4.4% year-on-year). For 2021 as a whole, prices climbed by 2.1%, following the 1.1% decline in 2020. The impact of the Russia-Ukraine conflict on the real estate sector should be contained. The sector has little exposure to Russian buyers (accounting for 2.1% of all home sales to foreigners), but the high energy prices and the shortage of materials will push construction costs up. The trade deficit reached 26,178 million euros in 2021 (double that of the previous year, although lower than in 2019), equivalent to 2.2% of GDP. The deficit in the energy balance stood at 25,326 million, its worst since 2015. The tensions in energy prices following the outbreak of the conflict in Ukraine will cause the energy balance to further deteriorate. Beyond this channel, Spain’s trade links with Russia and Ukraine are limited (1.8% and 0.5% of imports of Spanish goods, and 0.7% and 0.2% of exports), although we do have a high dependence on some supplies (11% of Spain’s energy imports come from Russia, while 16% of cereals and 62% of sunflower comes from Ukraine). 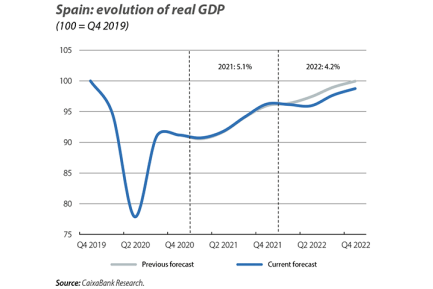