About CaixaBank Research
Work with us
CaixaBank
© CaixaBank, S.A.

Since 2015, the ECB’s quantitative easing programme (QE) and its low interest rate policy have substantially pushed down the financing costs of euro area countries. However, public debt remains high, at above 90% of GDP in the euro area, and when monetary stimuli are withdrawn and interest rates rise, public finances will start to feel the pressure.

It is therefore necessary to bring debt down to more sustainable levels. EU agreements establish that public debt should be below 60% of GDP and that countries whose debt exceeds this level must reach the target within 20 years. In order to analyse the fiscal effort required, we estimated the primary balance1 needed to meet the EU target. This analysis is for 2020, presumably when the ECB will have started its monetary normalisation process. We used the IMF’s growth and debt forecasts for 2020 and interest rates that could be expected given each country’s macroeconomic fundamentals and the monetary policy the ECB is likely to implement (see the Focus «Where are interest rates headed? The ECB and macroeconomic fundamentals» in this Monthly Report for a more detailed explanation of the methodology).

On the one hand, public debt in countries such as Germany and the Netherlands is very likely to be below 60% of GDP by 2020. Therefore, they will be able to implement relatively accommodative fiscal policies.

Other countries, however, will need to increase their fiscal effort significantly if they want to reduce their public debt at the pace that is required by EU fiscal rules. For example, Belgium and Spain would have to maintain a primary surplus of around 1.5% of GDP and France of 0.7%. Because these countries currently run primary deficits, an improvement of their public finances now that the macroeconomic environment is more favourable could prove beneficial.

The effort required is even greater in Italy and Portugal since they are have a relatively higher level of public debt. And in the case of Italy, even more so, since its growth prospects are quite modest. The IMF also seems relatively conservative in its growth forecasts for Portugal. One of the variables that determine the trend in public debt is the difference between the interest rate and the nominal GDP growth rate, also known as the ‘snowball effect’. Intuitively, the higher the interest rate, the greater the nominal growth that is required to reduce public debt as a percentage of GDP. As the second chart shows, the snowball effect for Italy and Portugal would actually increase public debt by 2020. However, these countries could offset the higher financing costs and continue to gradually reduce their debt ratio (albeit not at the agreed pace) provided they maintain their current primary surplus.

To sum up, this simple analysis shows that bringing public debt down to pre-crisis levels requires perseverance and effort. This task will become even more demanding once monetary policy starts to normalise. This highlights the importance of implementing reforms to boost potential growth in several European countries. Public debt will fall much faster if growth is actually greater than what is forecast by the main international institutions. 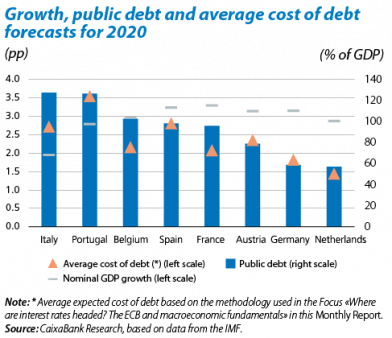 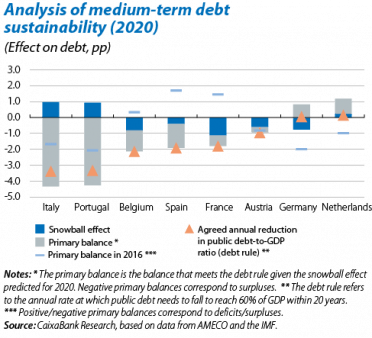