The euro area's recovery is almost being led by the Germany economy on its own. France, Europe's other great power, is clearly lagging behind and its growth capacity is very doubtful. This article provides a brief analysis of the underlying reasons as well as the possible effect of the measures proposed by the new executive led by Manuel Valls to revive the economy.

If we analyse the trend in the different components that make up domestic demand, we can see that its growth up to the crisis was particularly due to private consumption, and that its fall between 2008 and 2010 lies behind the economy's weaker performance. It is also interesting to observe that public consumption has remained constant throughout the period, now taking on a leading role in the country's incipient recovery.

However, the support these factors can provide in the short and medium term appears to be quite limited. Public debt stands at 93.5% of GDP, forcing the Prime Minister, Manuel Valls, to centre his economic policy on fiscal discipline. On the other hand, private consumption will not be able to count on extensive growth in credit, as this already stands at 120% of GDP, or on huge pay rises.

Can France's export capacity take over? Competitiveness indicators are not very encouraging in this respect. The country's value added per hour worked compared with other countries in the euro area has followed a negative trend in the last few years and this same trend can be seen in the World Economic Forum's global competitiveness index. For example, in 2006 France ranked 15th but by 2013 had fallen to 23rd. Nevertheless, the French government seems to be aware of the need to turn this situation around: the «responsibility pact», announced by the President, F. Hollande, includes reducing taxes on companies and some deregulation of the economy. Such good intentions, which are still not very explicit, make it difficult to assess whether France is finally giving its economy the turnabout it needs. It does seem to be moving in the right direction, however. 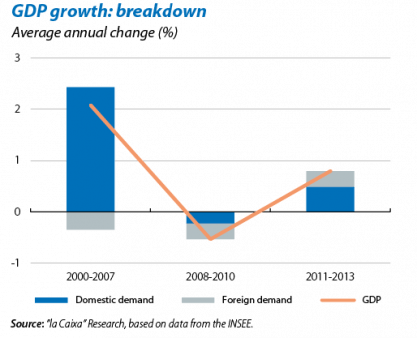 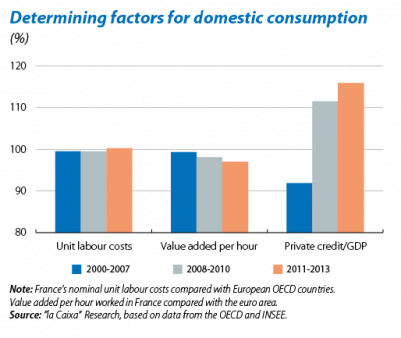 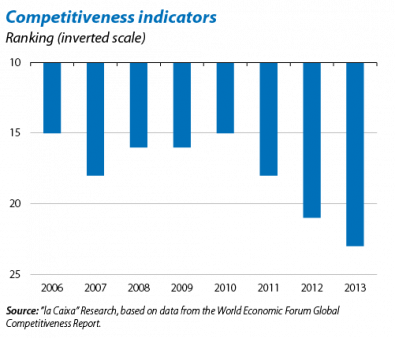